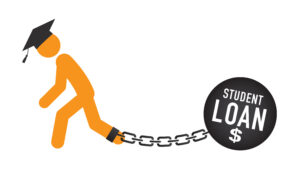 Unless you’ve been living under a rock, you know Joe Biden recently announced a plan to forgive $10-20,000 in student loans. Yes, Republicans have their hypocritical panties twisted over it — that’s to be expected — but though the forgiven amounts are smaller than some hoped, it’s the first time a president has actually tried to do something about the crisis of student debt.

Now, for 45 percent of borrowers, this will completely eliminate their student debt. And that’s great for them — no hate. But a story from the New Yorker provides ample evidence that for a lot of borrowers — particularly those with advanced degrees like a J.D. — that amount is a drop in the bucket.

Although her mother had no money, Betty Ann was a strong student and earned enough scholarships to receive a bachelor’s and master’s degree in education. In the next few decades, she worked as a public-school teacher in Pittsburgh and Harlem, in addition to raising two children as a single mother. But she grew increasingly frustrated by the marks of educational inequity—moldy lunches, low-grade reading materials—that plagued her classrooms. “I thought the only way that I could change things was to have a higher degree,” she told me.

In 1983, at the age of fifty-two, Betty Ann enrolled in New York University’s law school. As a middle-aged Black woman, she wasn’t exactly the typical N.Y.U. law student. Her white male classmates would slyly elbow her books off the long library tables, and once, while standing at her locker, a classmate waved a ten-thousand-dollar tuition check, signed by his father, in her face. Betty Ann had borrowed twenty-nine thousand dollars in federal loans. Today, she owes $329,309.69 in student debt. She is ninety-one years old.

Of Biden’s loan forgiveness program, the New Yorker has Betty Ann’s reaction, “She laughed. ‘It’s nothing!’ She laughed again. ‘It’s absolutely nothing. Like, excuse me! You are not helping. And I voted for you.’”

Harsh — but fair — criticism. And a reminder to Joe Biden that this isn’t an issue that’s going away.