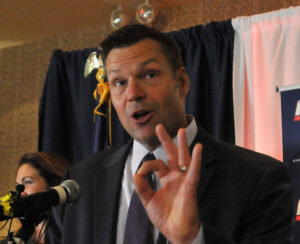 In 2018, Kansas Secretary of State Kris Kobach netted himself a contempt finding, a judicially mandated stint in CLE courses on Kansas procedure or evidence, and a $1,000 fine for “deliberately attempting to mislead the court” in the course of a failed attempt to defend that state’s proof of citizenship law. Kansas taxpayers had to cough up $1.9 million to the ACLU for Kobach’s antics.

He then embarked on a second career as a traveling salesman of sorts, marketing his legal services to small towns hoping to implement his handcrafted voter ID laws, only to find themselves stuck with millions of dollars in attorneys fees after courts blocked the statutes as unconstitutional. After which he entered private practice, counting among his clients the crowd-funded border wall scam which resulted in multiple federal convictions for money laundering, and in which Steve Bannon was indicted federally, pardoned by Trump, then re-indicted by the state of New York.

FFS, this guy is so incompetent that he submitted a brief in federal court with the note “PROBABLY NOT WORTH ARGUING”! Who on earth would hire this dipshit as a lawyer?

Last night, voters in the Sunflower State opted to hand this jackass the attorney general’s job, just four years after they were so appalled by his behavior that they put Democrat Laura Kelly in the state house. In fact, they re-elected her last night, even as they returned Kobach to office — truly the children of the Wheat State contain multitudes.

He went on to say that his priorities are “the fentanyl plague that is killing so many Kansans” and  “protect[ing] girls’ sports.” He’s also planning to open up a division in the state’s attorney’s office dedicated to suing the Biden administration and plans to think about new suits to file while “having my breakfast.” No doubt this last is a priority for the people of Kansas. Maybe he and Texas AG Ken Paxton can team up for something really spectacular to dump on the Supreme Court.

It’s all terrifying … until you remember how utterly incompetent this goober is, which makes it merely gross and cringey.

Congrats, Kansas, on whatever insane clown shit is about to be filed by your top prosecutor. Your circus, your monkey.

How to recycle campaign yard signs after the election

Solana Falls Out Of The Top 10 Crypto, Why There Is More Pain To Come