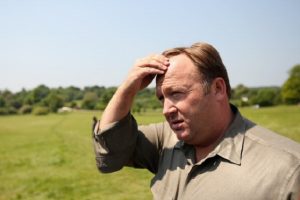 The parties rested yesterday in the first Sandy Hook defamation lawsuit against Alex Jones, sending the issue of compensatory damages for the podcaster’s lies about Neil Heslin and Scarlett Lewis to a jury.

The day started with Jones on the witness stand whining about his own victimhood as the innocent defamer of the parents of a murdered child, and it ended with his lawyer invoking the famous protest poem against Nazism, urging the jury to “speak out” for Alex Jones lest there be “no one left” to speak out when they come for the jurors.

And in the middle of the day, plaintiffs’ counsel Mark Bankston revealed that Jones’s lawyer Andino Reynal had sent him a digital copy of the podcaster’s phone twelve days ago, and it was too late for takesy-backsies.

During the defamation trial proceedings of Alex Jones, a lawyer for the parents of one of the children killed in the Sandy Hook School massacre said “12 days ago, [Jones’] attorneys messed up and sent me a digital copy of every text” and email from the phone of the Infowars host. pic.twitter.com/44xAU7goFR

First they came for the lawyers who were about to get a motion for sanctions, a bar complaint, and an earful from their E&O carrier, and I did not speak out because invoking a Holocaust survivor to defend a man who makes millions of dollars railing against (((globalists))) and George Soros is f*cking disgusting.

On the witness stand, Jones vacillated between self-aggrandizement and self-pity. He’s simultaneously a “meteor” set to destroy the mainstream media, and a victim of “identity theft” because he’s not allowed to respond to his critics on Facebook. A powerful voice for truth who broke the Jeffrey Epstein scandal wide open, and a “pawn” of the Clinton campaign, which “demonized” him for political gain by sneakily quoting his own words after he “quit drinking for a while” and decided that maybe 20 children actually did die at Sandy Hook. A reporter seeking the truth, and a pundit who is just asking questions and offering his opinion.

Even if he hadn’t lied on the witness stand, Alex Jones would have been a truly awful witness. But in the event, he lied a lot. And thanks to his genius attorney handing the contents of his phone over to the plaintiffs, Bankston was able to impeach him in real time.

“I must have dictated that to my assistant,” Jones said looking at an email with his name on it just moments after he testified that he hadn’t used email in ten years.

And the message from his bookkeeper celebrating the massive profits Infowars was taking in on sales of prepper meals belied both his claim of poverty and testimony yesterday about the slim profit margins on goods he flogs while describing the parents of slain children as “crisis actors.”

Apparently Jones was too busy hacking like a TB victim to hear Judge Maya Guerra Gamble’s admonition Tuesday that “You must tell the truth while you testify. This is not your show.” Good thing that cough cleared up in time for him to go on the air, though! It’s important to speak clearly when you’re disparaging the jurors deciding how big a check you have to write.

In an Infowars segment, #AlexJones ripped the jury in his defamation trial saying, that they are “extremely blue collar folks” and that “half that jury panel” does not know who he is. pic.twitter.com/80io3pmhqE

“They’re experts in leftist jurisdictions in sending out jury summons and hitting — let’s just say this — extremely blue collar folks. I mean, half that jury panel does not know who I am,” Jones complained on his show.

If he was betting that the plaintiffs’ lawyers wouldn’t find the tape and play it for those “blue collar” jurors, he bet wrong.

Perhaps seeking to clean up his client’s out-of-court blathering, Reynal stressed that members of the jury were “smart people,” before saying that he “hope[d] to God” that the plaintiffs would “find closure” after being so cruelly victimized. Not by his client, of course, but by the shooter Adam Lanza, by the Sandy Hook “truthers,” by politicians, and by those people who took their grief and weaponized it.

To which plaintiffs’ attorney Kyle Farrar scoffed that Jones’s so-called apology was “meaningless” since he clearly didn’t think he’d done anything wrong.

“They called them liars for 10 years to make money, and they’re calling them liars here to save money,” Farrar said indignantly.

And as the parties rested their case and the jury retired to tot up the damages, Rolling Stone reported that the January 6 Select Committee is seeking to get Jones’s emails and texts from Bankston.

Eagles 53-man roster projection after the first week of camp