Attorney Called Out Over Heated Cross Examination Of Cardi B 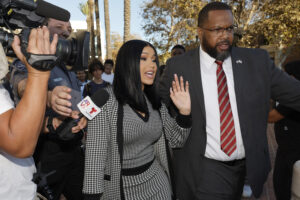 Singer Cardi B is being sued for $5 million by Kevin Brophy over the photoshopping of Brophy’s tattoo onto an actor’s back on the cover of Cardi’s 2016 mixtape, Gangsta Bitch Music Vol. 1. Testimony in the case got testy yesterday, with Central District of California judge Cormac J. Carney desperately trying to hold the line of decorum in his courtroom.

It began with plaintiff’s counsel, A. Barry Cappello asking Cardi B if she’d read Brophy’s deposition testimony. Brophy testified that he was humiliated that his distinctive tattoo was photoshopped onto the image of a man performing oral sex on Cardi B in the backseat of a car. Cardi said she hadn’t read the testimony and made repeated arguments about the $5 million she’s being sued over. And that’s when the decorum broke down, as reported by Law360:

“Let’s try to get through this. The jury is here for all of us, including you, so let’s respect everyone in the courtroom while we can,” Cappello told Cardi B, who shook her head and turned away, prompting her attorney Peter J. Anderson of Davis Wright Tremaine LLP to object, complaining about Cappello’s line of questioning.

The proceedings quickly spiraled into overlapping arguments by the parties, culminating in Cappello exclaiming, “Canned testimony!” before the jury. Judge Carney then called a break, and outside the presence of the jury turned to Cappello, who was at the podium.

Judge Carney warned Cappello about his behavior, “That totally crossed the line, sir.” Anderson wanted jury instructed about the exchange, but Carney seemed flummoxed at the situation:

“I don’t know what to do,” Judge Carney said, shrugging. “I’m thinking of having Ms. Cardi B finish with her testimony. You’ve gotten a lot of your direct testimony; Cardi B has clearly said what she feels is appropriate. That, or I’m thinking of a mistrial that I’ll do on my own.”

Even before the straw that nearly broke Judge Carney’s back, the testimony has been characterized by argumentative exchanges:

“It’s not Mr. Brophy. It don’t look like Mr. Brophy. You guys been harassing me for the $5 million, the money I worked my ass off with two kids these past years,” Cardi B argued. “It’s really insulting to me as a woman that a man is claiming responsibility in the lawsuit for all the success and work I had done and claiming that my success came from the portion of his tattoo, when it’s my voice that made me famous since 2014!”

Cappello commented that the plaintiffs are seeking relief including punitive damages to set an example, “so celebrities like you don’t invade the privacy of individuals,” but she continued to answer that the man in the photo is a fit, Black model and not Brophy, leading Cappello at one point to throw up his hands and turn from the podium, before Judge Carney stepped in, commenting: “You’re both arguing.”

“I’m looking for serenity,” Cappello said. “What am I supposed to do? Just wait? Is this on my time? That’s my problem.”

After the much needed break, Cardi B’s testimony resumed, with Cappello getting 30 minutes and the defense getting 60 minutes. The “Bodak Yellow” rapper was instructed to answer only “Yes,” “No,” or “I can’t answer that question,” unless asked for further explanation.

“We’re arguing with one another, it’s not productive,” the judge said. “It’s unprofessional, and our brand is being diluted, so please ask questions about the facts, not arguments.”