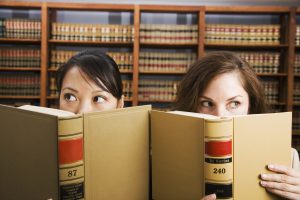 It is difficult to understate how downright evil the big book publishers are. If you think the RIAA and MPA are bad (and, they are), the book publishers take it to new super villain, mustache-twirling levels. George Washington University libraries have put out an alert to students and faculty that Wiley, one of the largest textbook publishers, has now removed 1,379 textbook titles that the library can lend out. They won’t even let the library purchase a license to lend out the ebooks. They will only let students buy the books.

Wiley will no longer offer electronic versions of these titles in the academic library market for license or purchase. To gain access to these titles, students will have to purchase access from vendors that license electronic textbooks directly to students, such as VitalSource, or purchase print copies. At most, GW Libraries can acquire physical copies for course reserve, which severely reduces the previous level of access for all students in a course.

This situation highlights how the behavior of large commercial publishers poses a serious obstacle to textbook affordability. In this case, Wiley seems to have targeted for removal those titles in a shared subscription package that received high usage. By withdrawing those electronic editions from the academic library market altogether, Wiley has effectively ensured that, when those titles are selected as course textbooks, students will bear the financial burden, and that libraries cannot adequately provide for the needs of students and faculty by providing shared electronic access.

For years now, we’ve noted that if libraries didn’t already exist, you know that the publishers would scream loudly that they were piracy, and almost certainly block libraries from coming into existence. Of course, since we first noted that, the publishers seem to think they can and should just kill off libraries. They’ve repeatedly jacked up the prices on ebooks for libraries, making them significantly more expensive to libraries than print books, and putting ridiculous limitations on them. That is, when they even allow them to be lent out at all.

They’ve also sued the Internet Archive for daring to lend out ebooks of books that the Archive had in its possession.

And now they’re pulling stunts like this with academic libraries?

And, really, this is yet another weaponization of copyright. If it wasn’t an ebook, the libraries could just purchase copies of the physical book on the open market, and then lend it out. That’s what the first sale right enables. But the legacy copyright players made sure that the first sale right did not exist in the digital space, and now we get situations like this, where they get to dictate the terms over whether or not a library (an academic one at that) can even lend out a book.

This is disgusting behavior and people should call out Wiley for its decision here.

Authentic Brands Group Behind Another Silly Parent, Child Trademark Dispute
There Are All Sorts Of Problems With Ruling That YouTube Ripping Tool May Violate Copyright Law
Court Strips Immunity From Cop Who Shot A Dog Within Seconds Of Arriving On The Scene Of A Non-Crime

Mailbag: Are the Eagles overrated, and just beneficiaries of a weak schedule?

Investors Should Check These Data Before Buying HBAR