Brett Kavanaugh Flees, Restaurant Laments That You Can’t Arbitrarily Strip Millions Of Americans Of Rights And Get A Decent Steak Anymore 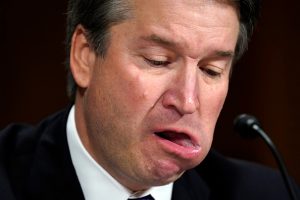 Brett Kavanaugh went out for some steak on Wednesday and ended up leaving out the back door after a protest gathered outside. It seems the justice feared that the prospect of hearing people yell at him for 20 seconds might upset his digestion and instead chose to flee Morton’s Steakhouse through the back door.

Witnessing the sustained intensity of post-Dobbs protests must shock Kavanaugh since his whole career journey rests on the premise that people don’t really listen to women.

And his preferred restaurant seems equally flummoxed, because in the wake of the incident, Morton’s Steakhouse decided to start rewriting constitutional law on its own.

NEW: Justice Brett Kavanaugh had to exit through the rear of Morton’s on Wednesday night after DC protestors showed up out front. A Morton’s rep told me: “Politics … should not trample the freedom at play of the right to congregate and eat dinner.” https://t.co/wlA4J2nxYW pic.twitter.com/jpsfhB3JVo

Interestingly, the “right to congregate and eat dinner” is nowhere to be found in the text of the Constitution and a quick Google search of major periodicals of the 18th century found no mention of this specific scenario. Looks like we’ve got another activist steakhouse on our hands! This is why you have to get out and vote so Ruth’s Chris can make these decisions.

More from the Morton’s statement:

Honorable Supreme Court Justice Kavanaugh and all of our other patrons at the restaurant were unduly harassed by unruly protestors while eating dinner at our Morton’s restaurant. Politics, regardless of your side or views, should not trample the freedom at play of the right to congregate and eat dinner. There is a time and place for everything. Disturbing the dinner of all of our customers was an act of selfishness and void of decency.

“Void of decency” — while a great band name — doesn’t describe the protest as much as the farce of a craven government official running out the back door when the public speaks up about his assault on basic rights. And “act of selfishness” better fits a restaurant scolding women stripped of their freedom to quiet down while we try to make some money selling mid-tier steak.

Because “unduly harassed by unruly protesters” sounds bad, but from every detailed account — and not refuted by Morton’s except in these very vague terms — it seems that protesters gathered outside the restaurant and called the manager asking that Kavanaugh be kicked out. On the spectrum of obtrusive protest that’s remarkably mild and civil. There’s no indication that the protesters tried to enter the restaurant to confront the justice and accounts suggest they remained on public property throughout.

And that’s how the law works because the Supreme Court explicitly decided that you can’t stop protesters from following someone to their home to complain about their work as long as the protest stays on public property.

Someone wrote me the other day and said that they didn’t think my piece explaining that the Court can’t make states stop the protests outside the homes of Supreme Court justices would “never persuade anyone,” which was odd, because it’s an entirely descriptive piece. I wasn’t trying to persuade people about it, that’s just what the law says. Whatever you think about protesting outside someone’s private residence (or a private business), the Supreme Court spoke and struck down laws placing limits on that right.

But maybe people don’t like hearing that this is the actual shape of the law in 2022. Maybe you think that just because the right to go to a restaurant is not explicitly written in the Constitution that doesn’t mean it’s not in there. Perhaps in the penumbra of the Bill of Rights?

Tell me about it, buddy.

What to know about side effects and allergic reactions from antibiotics