The city of Philadelphia is alive and well these days, with the Eagles soaring to a 5-0 record, the Sixers a week away from what appears to be a promising season, and the Phillies winning a playoff series for the first time in over a decade.

This Friday, the Phillies will host game three of the NLDS vs. the Atlanta Braves; fans who attend the game can enjoy three new fall-inspired menu items at Citizens Bank Park.

On Monday, Aramark Sports + Entertainment unveiled its new food options as a part of its Postseason Lineup at the Phillies’ ballpark and at Minute Maid Park, where the Houston Astros play. Here’s a look at what fans can order in South Philly.

Move over, Wawa, there’s a new gobbler in town. Sold in section 139, fans can order a sandwich made with freshly carved turkey, topped with stuffing and cranberry sage aioli on a piece of long roll bread and drizzled with gravy. The gobbler costs $14.99.

Crab fries from Philly bar and restaurant Chickie’s and Pete’s are a staple at a game inside any of the three stadiums in the Philadelphia Sports Complex. The crinkle-cut french fries seasoned in crab spices with a side of creamy cheese dipping sauce are a fan favorite.

The Philadelphia-based chain will offer a sweet treat at its concession stand inside the baseball stadium during the playoffs. The Crabby Sweets are sweet potato fries that come with a cinnamon maple dipping sauce. You can also get a side of cheese dipping sauce. The fries are available in section 102 for $12.99

Ice cream and baseball games go hand-in-hand. As the Phillies chase a divisional series victory against their NL East division rival Braves this October, fans can order a s’more milkshake reminiscent of nights by the campfire. For $8.99, fans can buy milkshakes with handspun Richman’s vanilla ice cream, graham crackers, chocolate syrup, and a marshmallow at Boardwalk Eats, located in section 142. 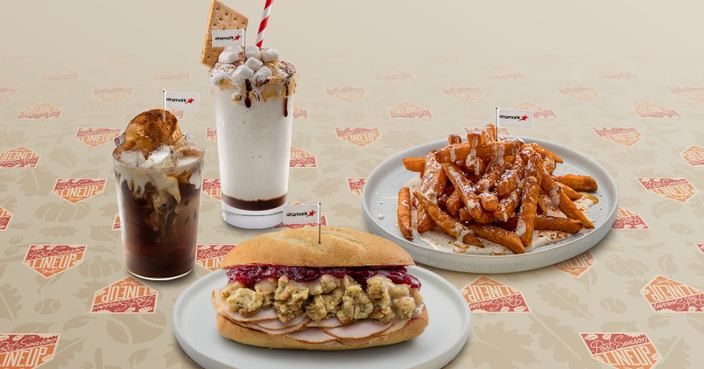 The Phillies series starts in Atlanta at 1:07 p.m. on Tuesday and shifts to Philadelphia Friday at a time to be determined. The team went 8-11 against the defending World Series champs during the regular season.

Who should be the Phillies’ DH while Bryce Harper is out?

Week 12 NFL picks: Rounding up the experts' predictions for Eagles-Packers