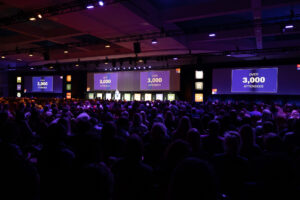 If anyone ever talks about how law practice management giant Clio got its name, they’ll tell you about Clio, the muse of history. The daughter of Zeus provides a fitting namesake for a platform that helps lawyers track the end-to-end history of matters. A little Greek mythology always classes up the joint.

It’s also a retcon. The story of the muse may sound great, but Clio CEO Jack Newton told me at this week’s Clio Cloud Conference that the name began as a temporary placeholder, a portmanteau of “Client Organizer” that no one really loved at first.

Over a long enough timeline, mythology can replace reality. Sometimes this obscures truth, other times it takes on a life of its own and becomes more true than truth as it replaces the foundation and drives future growth. Is Clio defined by jamming together the concepts of “client” and “organization” or a nod to the classics majors? Both stories bring something to the table, but the former reads a lot more like marketing speak than a philosophy and whatever one thinks of the Clio Cloud Conference, it’s all about a vision.

Or it would be if you could find the show. Nestling into the Nashville Gaylord Hotel for the first of a two-year stint, ClioCon had to deal with a hotel whose architecture only makes sense if it’s designed to hasten the return of Gozer the Gozerian. It took me two days to find a barely marked door that led me onto the second floor of my wing of the hotel. Despite building itself into a maze, signage is at a premium — as if the hotel itself faced a tight, court-assigned word limit and just had to forego valuable direction.

Speaking of names, unlike either origin of Clio’s name, “Nashville” is a deceptive and improper name to slap on this hotel. Over 10 miles from the actual city, the Gaylord is a sterile Cinnabon delivery device under a glass roof.

But I digress. The point is, Clio’s annual event once again focused on vision. I’ve said of past iterations of this conference that Clio manages to string together an eclectic — and not always legal — set of speakers and by the end of the show, you feel like “hm… that South American poet really does tie into small law firm management!” The opening keynote talked up “Antifragility,” and framing a law firm around keeping clients engaged and happy. Author Priya Parker talked about making memorable meetings. Psychologist Robert Cialdini talked about influence… bringing us back to how lawyers communicate with clients. Former Acting SG and current Hogan Lovells partner Neal Katyal delivered the speech that seemed to fit the theme the least, captivating the crowd with Supreme Court talk. But if you paid attention, he talked about building authentic trust with a client and how he grew as a communicator through embracing lessons from the dramatic arts and improv.

In any event, the show delivered a cohesive theme and that theme was that the coming economic headwinds are going to be weathered by the lawyers that distinguish themselves by really connecting with their clients through effective communication.

Newton told me the guiding principal of the conference is to deliver content tailored to what customers are saying — either directly or indirectly through anonymized usage patterns. Users are in a building mode? A panel from Lawclerk’s Kristin Tyler called “Hire for Success: Best Practices for Growing Your Team.” Questions about how court’s are transforming after the pandemic? A panel with Judge Scott Schlegel on “Innovation in the Courts.”

But there’s no getting past the fact that the Gaylord is a confusing labyrinth at odds with an event that thrives on networking and the exchange of ideas. As Bob Ambrogi put it:

In its earliest years, ClioCon was at the Radisson Blue Hotel in Chicago, where the venue was intimate and had any number of nooks and crannies where people could sit and chat. Even as the conference grew over the years to some 2,000 in San Diego in 2019, I was impressed that Clio was somehow able to maintain that sense of intimacy.

Perhaps the loss of that intimacy is an unavoidable price of success. Even as other conference’s struggle to rebuild attendance in the wake of COVID, this year’s ClioCon was the largest ever, with 2,000 attendees on site and another 1,000 attending virtually from all over the world. With that many people, it will always be a challenge to find a venue that is conducive to networking, but the Gaylord seems hellbent on discouraging it.

Clio’s growth definitely changes the conference. But if we can retcon the mythology a little bit, maybe the intimacy of past conventions weren’t really about size. Ten years ago, solos and small law firms adopting technology for the first time gathered to celebrate being trailblazers. The same group — plus an increasing number of more mid-sized firms — are now mainstream. Perhaps the event was never about networking at a more intimate conference and always about meeting firms where they are. And the truth is, firms don’t need hand-holding or a pat on the back for adopting technology these days, they now need to know where that fits into their client relationships and that’s always going to change the orientation of a conference.

Or maybe I’ve spun a new myth that will be debunked in an article next year. What I know for sure is that if you plan on attending for the first time next year — plan on adding your perspective to building the mythology around this event — don’t ask me directions, because I still don’t know how to get around the place.

Report: Commanders QB Carson Wentz has a broken finger on his throwing hand

Chainlink Makes List Of Most Purchased Tokens In Last 24 Hours