Committed to a seasonal romance 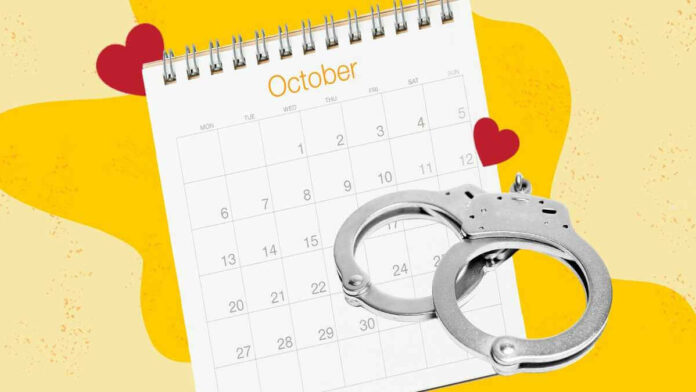 We’re already midway almost through the month of November and while that means that cuffing season is very much upon us well and settled indeed, not all of us might know that such a time of the year even exists. That isn’t much of a surprise though since this season of sorts isn’t one defined by environmental changes of the natural world. But it still is very much ‘natural’ still- and one curiously universal at that indeed.

Pertaining to an existence in the magical realm of romance and occurring as the practical pursuit of relationships is this particular period of pining not so much for a certain someone as it is of a certain something. Taking over our fancies- and fantasies- during the cold days of the winter is an obvious longing for warmth and not one just availed out of the cosy comfort of the woolens. It also is a desire for emotional embrace and many a heartwarming realisations in rosiness that presents as much needed a experience in connected living. Marking the onset thus of the cuffing season is this spark that we wish to ignite in our lives particularly during this time of a not so sprightly existence when the awareness of loneliness tends to be starkly unsettling enough. And so it emerges- this span of the days through the months of October to February- or the dwelling through late fall to spring almost as the period of harbouring a very strong desire in cosying up in much personal terms.

Much profound would be the dawning of this season of true romance indeed upon a world now residing in the festive mood of less work and more indulgence. As an experience roughly encompassing the span of the holidays from Thanksgiving to Valentine’s Day, the desire to be cuffed to someone special in pure intent of commitment is one much remarkable for sure. This wanting to drown in the deep sea of love occurs as an awareness of much sincerity- one, that despite the more feasible interpretation of its name as something much rooted in physicality reveals to be a more profound perception indeed.

So real is the essence of the charms that love supposedly resides in that makes even otherwise perfectly happy singles want to lose themselves to the large heartedness of it all. Equally exerting upon the casual daters of the world happen to be the vagaries of winter that leads them to discover themselves in this new light of personal defining. It doesn’t matter whether that desire continues even after the ‘peak season’ has passed, for the standout characteristic of the cuffing season is one residing in that genuine, deep longing for warmth in much universality by the forever dreamy human heart.

The description of it might be a bit misleading and much obscure even but it isn’t exactly very new a concept in exploration as well as in etymology. First encountered in 2010 and assuming much popularity some three years hence, this ‘time of the year when people are looking to be in a relationship’ though is an even ancient proposition in itself. With the science of physicality to back up also this experience essentially expressed in emotional terms, cuffing season isn’t any fad that modern earthlings obsessed with the desire to name and trend just about anything and everything have conjured up in their popular imagination.

It instead is much rooted in reason and one that emerges from the essence of the very evolutionary existence of humankind. Inclining with the survival of the fittest theory in the context of the continuing human race is this form of adaptive behavior that has come to be, as a definite draw upon the Darwin established truth of much empirical evidence. That such premise of its founding is more physical does not however refute any assertion of the emotions when it comes to evoking the underlying sentiment of the cuffing season.

To elaborate in terms physiological as well and encompassing also the extents of the medical and the cuffing season isn’t just a yearning of the soul; it also is a veritable necessity as a condition of survival itself. Given how real the winter blues are, induced by a serious dip in the levels of the hormone serotonin and some close human connect feels like a requirement in much respite from this larger exertion of what is one form of a seasonal affective disorder. No wonder some caressing of the body and the soul is what one comes to crave in such dire circumstances of existence, making the manifestation of the cuffing season far more real than what it might likely be dismissed as in ridiculousness.

Of course another undeniable extent in which these winter time relationships come to scout greater ‘demand’ in their yearning is the charming visage of them. In the merry vibe of the festivities and those days of vacationing when lovestruck couples go about their affairs as lovely ‘specimens’ of the classic hand-in-hand charm in alluding, as happy creatures dwelling in the ultimate bliss of love and companionship and care, it indeed is natural indeed for even the most nonchalant of us humans to feel their hearts let out a sigh in yearning for that special someone to share the precious bond with. So even when it isn’t the darkness of the winter days and the sleepless lengths of the night leading us to look for prospective partners, it at least is the love infested air of the environs that finds indeed a way of imbuing in us that same longing in romance.

In adhering to this spirit of identification, the cuffing season often leads to a sprouting up of romantic relationships. And while these generally tend to be short stints in romance, arising during peak season and fizzling out in the off period, there is no exclusive requirement though of them having to be just that. For many a cuffing relationships do indeed cover the span of the diverse seasons to be resplendent in the really heartwarming hues of love.

But irrespective of whether the cuffing period romance evolves into something more eternal or remains true to its defining, it still is essential to make the intent of the relationship clearly known. Communication is the key in any kind of relationship, even when it isn’t even remotely romantic and cuffing season romances are no exception. Because not everyone might be open to the idea of pursuing a relationship with no definite future, it is essential to relay one’s own expectations of what they are fanning the romance for. What might be only a cuffing season for you might be a rather momentous experience for someone else and in ensuring that you do not have to deal with the pangs of a phased assertion, you should as well not endow upon someone the misery of a perennial nature instead.

For all the amours though playing through the narrative of winter time love that cuffing season roughly spans as, there can exist still elements of considerable conflict within. The desire and indeed the pressure of needing to have a partner to ‘possess’ and perhaps even flaunt during that happy happening of the holidays for a proper celebration of life itself has led to a simultaneously interesting and perplexing prospect as well to consider. And thus enters winter coating as a very precarious situation to find oneself in, specifically when battling already with the literal as well as proverbial colds of the season.

What winter coating emerges as is the dubitable much distinction of rekindling with an ex flame as a cuffing partner. That the onset of the winters already has us a bit too deep in the dumps to go about looking for someone even when yearning indeed for them is what makes this easy option in temporarily patching up with a past lover just the trap we fall into. With of course the memories rekindled and the romance missed as the chills take over us and we find ourselves influenced enough by the turn of the season to be wallowing as miserable and sad and crying humans, the temptation of returning to the past is made even more convenient an option to explore. And that’s exactly what some of us yield in to, and in much secret happiness as well- leaving the judging of the impending doom or delight as a disaster we anticipate to reasonably deal with once the coldness of the weather dies down for our stronger, resolute selves to spring back to life.

Interestingly as well this scouting out of someone from the past isn’t the only intriguing aspect of reference that the cuffing season amply expands the scope in exploration. An exactly opposite phenomenon of the winter time expectations in cuddling might reveal to be during the beginning of that timeline, asserting as yet another relationship identity of freckling. As the contrasting emergence of a summer time romance when the romantic partner exits the relationship as soon as autumn begins setting in, freckling is yet another seasonal assertion of modern love. Whether or not a summer love is as essential to human survival as the evolutionary need in which cuddling season came to be cannot be said with certainty. But it sure manifests the notion of love in its current realisation not necessarily be always emerging as the eternal entity that it has been believed and fantasised to be.