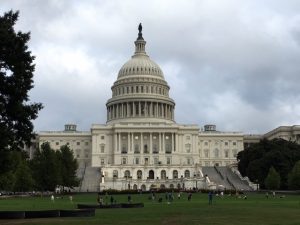 The Supreme Court released its opinion in Dobbs v. Jackson Women’s Health on June 24, 2022. Within a little over a month of the release, a robust discussion developed within both Houses of Congress on whether there should be a legislative response to this decision.  Congress is notorious for lots of discussion combined with little action.  Based on Congress’s recent history, perhaps nothing will happen in response to the Court overturning the constitutional right to an abortion as established in 1973’s Roe v. Wade.

Congress does not often respond directly to Supreme Court decisions.  Probably the most notable time Congress did so within the past several decades was in response to the Court’s decision in Employment Division v. Smith.  After this decision in which the Court ruled against protecting the individual right to violate a valid law in furtherance of a religious practiced Congress passed the Religious Freedom Restoration Act (RFRA). RFRA was created with the intention of:

“Prohibit[ing] any agency, department, or official of the United States or any State (the government) from substantially burdening a person’s exercise of religion even if the burden results from a rule of general applicability, except that the government may burden a person’s exercise of religion only if it demonstrates that application of the burden to the person: (1) furthers a compelling governmental interest; and (2) is the least restrictive means of furthering that compelling governmental interest.”

There’s a much greater history to RFRA based on additional Supreme Court caselaw and related legislation, but that is beyond the scope of this post. The main point is that Congress rarely responds to Supreme Court decisions but there are historical instances where it has.  This is one of those instances where (mainly) Democratic members of Congress have called for various bills to be enacted in response to the Dobbs decision.

This strategy makes sense to the extent that it is highly unlikely that the Supreme Court overturns its decision in Dobbs anytime soon. Even a quick turnaround like the time span of 17 years between Bowers v. Hardwick and Lawrence v. Texas is unlikely in this instance. Only two justices remained from the 1986 Court in 2003 and one of the two, Justice O’Connor, flipped her position on the issue of the constitutionality of laws that forbid “two persons of the same sex to engage in certain intimate sexual conduct.”  At least the three justices appointed by Trump who voted in support of Dobbs will likely remain on the Court for the next 17 years.

While bipartisan support for a measure to overturn Dobbs will be difficult to garner by any stretch, the discussion in Congress will go on. To that end, I used statements from the Congressional Record to give a sense of the tenor of the discussion of these issues in Congress as well as the speakers that are most active.  I specifically analyzed the entire discussion of these topics between June 24, 2022, when Dobbs was released and August 15, 2022, as well as 176 speaking turns by members of Congress directly relating to these issues.

Potential responses to Dobbs aren’t only in the form of proposals for abortion related legislation. In the wake of Justice Thomas’s comments in his Dobbs concurrence, other pieces of potential legislation relating to the protection of rights to purchase contraception and same-sex marriage have also been mentioned.

To that end, the most mentioned piece of related legislation was The Right to Contraception Act which was mentioned 56 times during this period.  After that the most referenced piece was the Respect for Marriage Act (38 times), the Reproductive Freedom Act (21 times), the Expanding Access to Family Planning Act (10 times), the Freedom to Travel for Health Care Act (nine times), and the Allowing Greater Access to Safe and Effective Contraception Act (three times). These bills are all in their early stages and any of them will lead to an uphill battle if they are voted on in the Senate.

One way to think of this discussion is by what was said split between Democratic and Republican members of Congress. Below are key phrases next to the number of times they were repeated by Democrats:

These phrases convey the feelings of dismay with the ruling, the loss of a right, and the antagonism certain Democrats feel towards Republicans.

By contrast, here are common phrases used by Republicans and the number of times they were spoken:

These phrases speak to the values of rights and of leaving decisions such as these to elected representatives.

These discussions occurred in both Houses of Congress and so the analysis combines statements from the House and the Senate. Building on this commonality below is a count of talking turns by all members of Congress that spoke twice or more in these discussions. 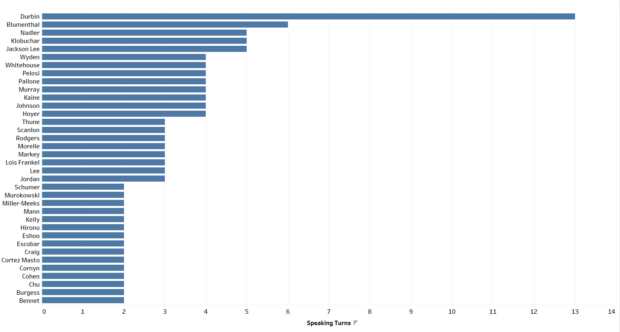 Note that Lee refers to Barbara Lee of California.

Dick Durbin far outpaces other speakers with 13 turns.  Durbin, a lawyer, is also the Senate Majority Whip, and has served as a Senator for Illinois since 1997. Durbin is also (and importantly) the Chair of the Senate Judiciary Committee.

Also helpful in this analysis is an understanding of the relative ideology of the members of Congress involved in these discussions since some are more partisan than others. To this effect, Voteview, originally developed by Professors Poole and Rosenthal, provides ideal points for each member of both Houses of Congress on the same scale. I used these ideal points to compare the relative ideology of the Congress members in the histogram below. 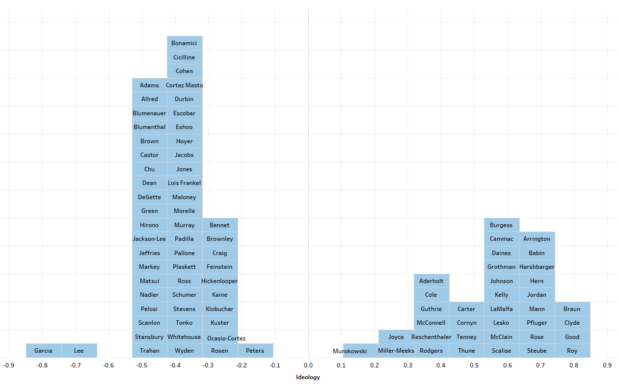 How well do these ideal points translate to the statements made by these members? I use six statements below based on four ideological members and two more moderate members to convey the differences.

First is a statement from the far left from Sylvia Garcia of Texas:

Also on the far left, the next statement is from Barbara Lee of California:

“Everyone deserves the freedom to make personal decisions about their health, their bodies, their futures, as well as the right to travel. Yet, the Supreme Court’s decision has stripped this fundamental right to reproductive freedom from millions of people in this country… Not only are some States moving to enact extreme abortion bans, but some anti-abortion State legislators are working to prohibit people from traveling across State lines to access care and are targeting people who assist those in need.”

Towards the center, the next statement is from Scott Peters of California:

“Republican efforts to criminalize abortion will pit neighbors against neighbors, punish women for exercising their bodily autonomy, and imprison doctors who took an oath to protect their patients. That is happening right here in what is supposed to be the freest country in the world. That is why I am standing here, today, to protect a woman’s right to travel in search of legal healthcare. Madam Speaker, if the Supreme Court won’t protect Americans, then we in Congress must do everything in our power to stand up for our basic freedoms.”

Just right of center, the next statement is from Lisa Murkowsi of Alaska, who was one of the Republican Senators that expressed dismay with the Dobbs decision:

“In its decision in Dobbs v. Jackson Women’s Health Organization, the U.S. Supreme Court abandoned a nearly 50-year precedent that had been reaffirmed and on which women had relied for decades. The Dobbs ruling was, as the Chief Justice described it, a “jolt” to our legal system. This action has further divided the country at a moment when now, more than ever in modern times, we need the Court to demonstrate consistency, predictability, and restraint.”

On the far right, first is a statement from Andrew Clyde of Georgia:

“First, thank you to the Supreme Court for removing the curse of abortion sanctioned by a Federal Court ruling back in 1973. Six Supreme Court Justices have stood for life, and that is a beautiful thing.”

The other statement from the right is from Bob Good of Virginia:

We would expect more extreme statements from the members of the edges of the spectrum and more restricted speech from the more moderate members. Although there are many ways to measure language, one often used method is to look at the tone of the text on a scale of negative to positive. Text2Data provides a machine learning framework to analyze language on a scale of -1 for a negative tone to +1 for a positive tone. The results from measuring the above passages were somewhat surprising.

I assumed that the tone would range from left to right from negative to more positive. Instead, I found that members Lee and Garcia had moderately positive tones of .14 and .23 respectively, moderate members Peters and Murkowski had the most negative scores of -.62 and -.99 respectively, and members Clyde and Good had the most positive measurements of .54 and .64 respectively.

It was not surprising that Congress responded to the Dobbs decision. Democrats hoping to reinvigorate some hope of a national right to abortion have little place else to turn. Justice Thomas portends the possibility that other rights protected under the constitutional Right to Privacy could be overturned as well. These discussions convey the emotions we would expect from the left and the right on such issues and show, as expected, that there is very little middle ground. Most of the measures put forth by the Democrats have little chance of success, especially if Republican support is necessary in the Senate. Still, this lively debate showcases how Supreme Court decisions can drive conversations in Congress and provides a very real example of the separation of powers framework functioning as it might, or might not, have been envisioned.

Cardano Price At $0.44 With Strong Support, What’s Next? 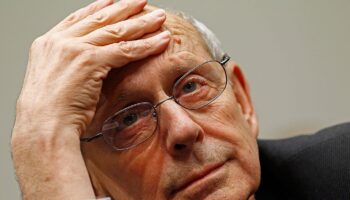 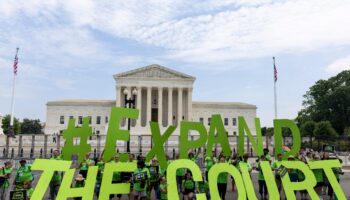