Darius Slay returns to Detroit, this time as an Eagles captain

When Darius Slay returns to Ford Field on Sunday, he’ll step onto Detroit’s turf with a ‘C’ on his chest, a first for his career and an honor that means the world to him.

“[My emotions] were everywhere, man,” Slay told the media Wednesday of when his teammates broke the news. “Like I was telling the group, that means a lot to me. That’s probably one of the biggest achievements of my career. Never been a captain before, so I’m like ‘Yeaaaaaaah, man!’ Had a little tear out of me for a minute, I’m not gonna lie. I was in the huddle like ‘OH SNAP!’ But it’s a blessing to be honored that.”

Slay was announced as one of the Eagles’ seven captains for 2022 by head coach Nick Sirianni last week, after a process that was voted on entirely by teammates. He’ll wear a ‘C’ on defense alongside Brandon Graham and Fletcher Cox, while Jalen Hurts, Jason Kelce, and Lane Johnson represent the offense. Jake Elliott will captain special teams.

The 31-year-old cornerback arrived in Philadelphia in March 2020 via a trade with the Lions after seven years in Detroit. He signed a three-year, $50 million extension with the Eagles shortly after and quickly established himself as a vital part of the team’s secondary.

Is Slay the typical idea of a leader? Not really, he admits. His strengths lie in the little things.

“I’m not a big speech guy. I’m not a [Brandon Graham] guy that can just talk to the whole group,” Slay said. “But I am a guy you can follow, as in work hard, the work ethic I put in. I just go hard every day, and I just try to be the best version of me. Like I always said, it’s just compete, do my job at a high level, and lead by example.”

It’s his unique energy that other players rally around too, both the goofy side nearly everyone sees and the more serious demeanor his teammates have been able to recognize underneath.

“That’s what made it shocking because everybody, everywhere I’ve been at, it’s ‘Slay puts smiles on faces, Slay laughs and giggles.’… But I’m always pretty much serious between the lines,” Slay said. “But I enjoy it because I enjoy my job.

“I love to have fun, I love to compete. I might be joking between the lines, but deep down in my heart, I’m trying to win every matchup I can. But like I said, if you’re not enjoying the game, there’s no point in being out there. When it’s not fun and all serious all the time, it’s kind of boring. So I have fun, and for my teammates to see past all that and still know I’m serious at all times, it’s a blessing.” 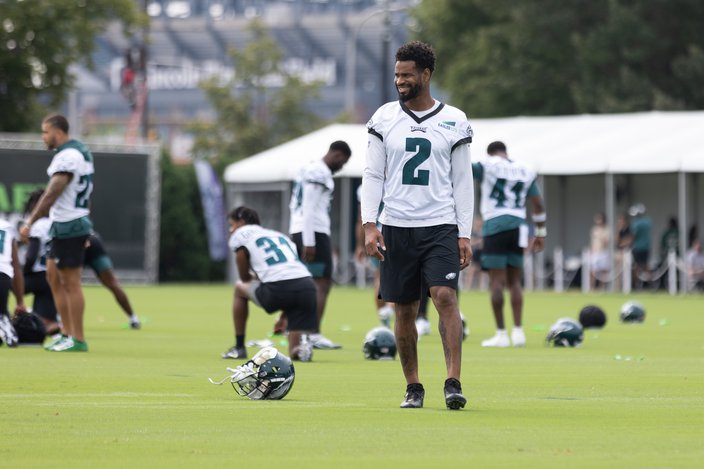 And as a player, having Slay in the building has been a blessing for coaches…Well, any coach not named Matt Patricia, that is.

“He comes in every day ready to work, and that’s important, that energy you bring every day,” Sirianni said Friday. “There’s gonna be days where I come in here and [don’t have it], but you gotta come in and be ready to go, and he brings it, and that’s contagious. I really believe that.”

While Slay has only just been named a captain for the first time in his about to be 10-year NFL career, the leadership qualities have always been there, both on and off the field. Avonte Maddox has known as much for a long time.

When he was still with Lions, Slay would go to high school games and organize workouts with local high school and college players. It had an impact, especially on a young Maddox, a Detroit native who will also be making his big homecoming when the Eagles kick off against the Lions Sunday.

“It’s a blessing to be where I’m at, so I try to give my blessings to everyone else,” Slay said. “I wish I had grown up, having a guy that was in the league, come back to my hometown, and say DBs come meet me at the field. I know I would’ve been there. So I just try to make a change in the world in that kind of aspect and Avonte was a kid that saw that, seen that, was hanging around. It touched my heart that he remembers stuff like that.”

“Slay’s always a leader, always has been one,” Maddox said Wednesday. “I’m happy to see the ‘C’ on his chest.”

Common causes of back pain in adults