The Chicago Cubs are the epitome of can’t get right, as illustrated by skipper David Ross getting tossed on Thursday night for arguing that New York Mets starter Carlos Carrasco balked.

Down 4-0 in the bottom of the fourth inning, Ross argued Carrasco was not coming set. Too bad John Tumpane wanted to hear none of it from the manager of one of the worst teams in baseball. Chicago would go onto lose to the Mets 8-0 at home, falling to 34-55 on the year. The Cubs have lost an MLB-worst seven games in a row, festering like hot garbage on the North Side of Chicago.

2016 feels like lifetime ago, as the lovable losers may never win another World Series title again.

While telling Ross to go watch the rest of the game on a TV in the clubhouse was incredibly soft, who cares? His team stinks to high heaven. Though it is his job to win games managing the Cubs, ownership has put its former backup backstop in an impossible situation. The roster Jed Hoyer has assembled is atrocious, as Ross has to argue for balk down 4-0 to try and stay alive in a ballgame.

Even if the Mets are a far superior team to the Cubs this season, you have to put forth a better effort than getting shut out at home 8-0 to drop your seventh game in a row. New York may have 22 more wins than the Cubs do now, but the gap should not be canyon-sized between these two NL clubs. Both organizations are historically dysfunctional, but this gap could not feel any wider.

What this really comes down to is better teams will always get the benefit of the doubt from the officials. If the Cubs were even within striking distance of being a .500 team, maybe the umpiring crew would think about listening to Ross’ pleas? In the meantime, the Cubs keep on losing one game after another. We have to begin to wonder how safe is Ross’ job after this awful season.

Trying to tell an umpire the opposing team’s pitcher is balking is a fantastic way to get ejected.

US Retail Sales Top Forecast In Boost From High Inflation

5 bold predictions for series of the weekend 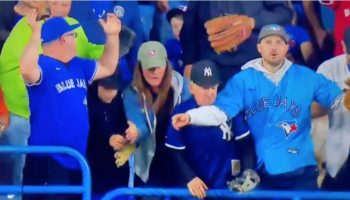 The mystery that is the Brooklyn Nets