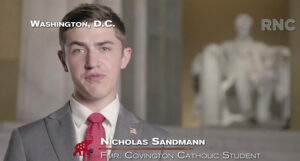 Nicholas Sandmann smirked in the face of a Native American activist while wearing his bright red MAGA hat in an image that dominated the media for a few days in 2019. The imagery sparked a lot of discussions that generally made the Covington Catholic student look like a jerk.

So he sued everyone. And now he’s lost.

We told you from jump that nothing in his complaint added up to a defamation claim. Even far-right legal analysts dismissed the claims as janky.

But others just refused to believe that Sandmann’s claims could be stopped by something as trifling as “centuries of defamation law.” Because defamation is about facts and not opinions and the media got all the facts correct. If they only expressed opinions about what those facts mean, that’s not going to cut it for the plaintiff.

Fox News recently summed up the crux of Sandmann’s complaint as the media “painting him as the, basically the face of teenage racism.” To paraphrase Abe Lincoln, “Better to remain silent and be thought as basically the face of teenage racism than to appear at the 2020 GOP Convention and remove all doubt.” Which he then did of his own volition even though most of the media statements at issue dealt with the idea that he was an avid Trump supporter so he gave away any claim that the media made false statements of fact and who the hell was advising this guy?

Oh right, he used to be repped by Lin Wood.

But here the media reported that a MAGA hat-wearing kid was smirking at a Native American protester — factual claims that seem to be accurate — and then said stuff about the broad undercurrents of Trump-fueled racial animosity which is… both general and opinion. For Sandmann to win he needed to prove a flaw in the factual predicates for that opinion — like, that he was wearing a Red Sox cap or something.

In the end the only claim still on the table was that the media repeated an allegedly false claim that Sandmann was “blocking” the activist, which the judge noted was always framed as the activist’s first person view of the event and no reader or viewer could be misled that it was from anyone else’s perspective.

The media defendants were covering a matter of great public interest, and they reported Phillips’s first-person view of what he experienced. This would put the reader on notice that Phillips was simply giving his perspective on the incident.

This loss must come as a shock to all the graduates of the Twitter School of Law who bitterly complained online and through email that we just didn’t understand how Sandmann was going to bring down the whole mainstream media with his massive defamation case.

Oops. I guess that’s why I have a real law degree and a couple decades of experience and you’re writing angry messages from [email protected]

The real loonies came out after the three other parties settled, proclaiming that this “admission of guilt” proved Sandmann’s imminent victory. But settlements aren’t admissions of guilt and those outlets handed Sandmann what they saw as the nuisance value of the claims — it was going to cost millions to take this all the way to the inevitable summary judgment so just give him something to go away.

But, no, the case remained just as flimsy as it was when Sandmann filed it, and the other outlets coughed up the lawyer fees to win in the end.

So it’s finally over and hopefully this will chasten the armchair attorneys pumping up their followers on misleading legal takes about this case.

Let’s check in on Fox News:

Sigh. So this nonsense is probably going to go on forever.