Federalist Society Being Targeted For Their Role In Overturning Roe 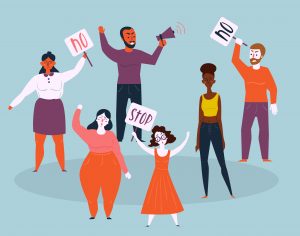 I’m sorry, am I supposed to have a more nuanced take? Because I don’t. In the wake of the Supreme Court’s disastrous decision in Dobbs, things have been really simplified for me — either you want the government involved in my uterus or you don’t. And I don’t fuck with people who are comfortable with banning or restricting abortion care. Full stop. And I know what side FedSoc is on.

Anyway, back to the story. Earlier this week the New York City Lawyers Chapter of the Federalist Society had an event featuring former Attorney General Bill Barr. I mean, gross, right? Anyway. NYC for Abortion Rights and the NYC Chapter of Democratic Socialists of America organized a protest at the event. As organizers noted, they “gave them a taste of what it’s like to be a patient entering an abortion clinic in the US.”

Perhaps more to the point, while readers of this blog are likely familiar with FedSoc, too many Americans are not. They deserve every bit of negative attention they’re now getting. The nakedly political organization (don’t fall for their line about being a debating society) has a chokehold on conservative judicial candidates. Every one of the GOP-nominated Supreme Court justices are current or former members of the organization.

And god forbid a Republican nominate a judicial candidate that might uphold abortion rights, à la Sandra Day O’Connor. FedSoc has been actively curating lists of judicial nominees that willing to overturn Roe. That — along with a host of right wing political goals — has always been the point.

Think about it: Donald Trump only considered SCOTUS nominees that FedSoc Chair Leonard Leo presented.  And, wouldn’t you know it? Right wing sources have been pretty clear on the why, “No one has been more dedicated to the enterprise of building a Supreme Court that will overturn Roe v. Wade than the Federalist Society’s Leonard Leo.”

This ideological purity and pursuit of a far right agenda is the single most important bona fide for GOP judicial nominees. Now this country is reaping the results: Pretty obviously abortion rights have been decimated. The First Amendment Lemon test is gone. Miranda warnings were gutted. The first clause of the Second Amendment was read out of constitutional jurisprudence, and people will die as a result. Clean air is no longer a priority.

AND THEY’RE NOT DONE. Clarence Thomas’s chilling concurrence in Dobbs makes it clear contraception, sodomy, and same-sex marriage are on the agenda. The Court took up Moore v. Harper meaning the writing is on the wall for democratic elections.

All of this hellscape can be laid directly on the doorstep of FedSoc. So, yes, I’m glad their event was disrupted by protestors. Let’s use those First Amendment rights while we still have them.

118 Things To Do When Bored At Home