Fire TV is now available on the Echo Show 15. In September, Amazon announced it was soon bringing its Fire TV experience to its larger, 15.6-inch wall-mounted Echo, offering consumers a way to access a combination smart speaker, smart home hub, and a TV-like device at a relatively affordable price point — it’s currently selling for $185, down from the list price of $250. With the free update rolling out today, Echo Show 15 customers will be able to stream Fire TV content, which means Prime Video along with other popular services, like Disney+, Netflix, YouTube TV, HBO Max, Hulu, Parmount+, Peacock, NBC Sports and others. YouTube and YouTube Kids are also available as Amazon and Google worked out their differences back in 2019.

While the streaming functionality may now become the main selling point for this device, the Echo Show 15 also offers other standard Echo Show functionality, like the ability to manage smart home devices, make to-do lists, listen to podcasts, and speak to Alexa, among other things.

Plus, the Show’s bigger screen can be customized with a variety of widgets, which allows the device to become sort of a family hub with things like sticky notes, shopping lists, shortcuts to smart home favorites, reminders, shared and individual calendars, links to recently launched apps, and more. To cater to those who mount the device in the kitchen, the Echo Show 15 also offers recipe suggestions from Epicurious, Tasty, and Allrecipes. 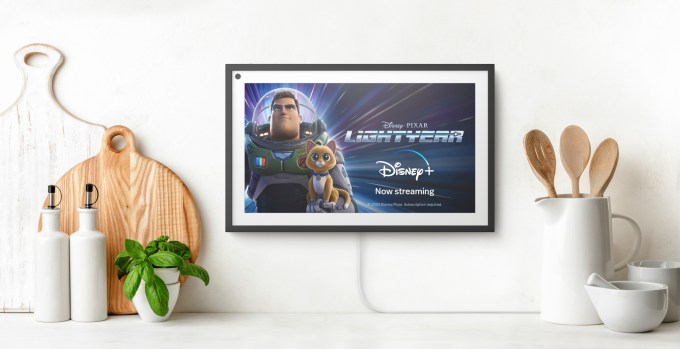 Privacy-sensitive customers should be cautioned that there are some more invasive features included with this version of Echo, including a Voice ID feature that allows Alexa to call you by your name and personalizes the responses based on who’s asking. It also includes a Visual ID facial recognition system that’s used to provide additional personalization. (Amazon says Visual ID and facial images are stored on your Echo Show device, and both systems are optional.)

After the update that brings support for Fire TV, users will be guided through a setup process that includes having them select apps and pairing their Alexa Voice Remote (3rd gen.). The remote only works within the Fire TV experience. It’s useful, as some apps (like Netflix) will warn they offer “limited touch functionality.” In those cases, the device will pop up a virtual on-screen remote which you can tap to navigate the service if you don’t have the Alexa remote or don’t have it handy. It’s an odd workaround for the lack of touch controls — a feature that’s somewhat expected when a device is otherwise touch-based. But it works in a pinch.

One issue that may crop up with the remote control is not about the functionality itself, but rather the way the device is meant to be used in real life.

If the Echo Show 15 is mounted in the kitchen, where is the remote meant to go — on the kitchen countertop? In a junk drawer where it’s out of the way? Next to your blender? It’s odd. In the living room, it’s fine to leave a remote on an entertainment console or coffee table, but most people wouldn’t want to see a remote control laying around in their kitchen. A simple add-on like a remote control holder on to the device’s outer frame could have gone a long way towards making the Echo Show 15 more user-friendly for real world use. (Some of the third-party accessory makers — like those who offer stands to consumers who don’t want to wall-mount their device — haven’t thought about this need, either.)

Meanwhile, though the remote can be used in Fire TV, it can’t be used to navigate the Echo Show 15’s widgets or other skills and services. That seems like a miss on Amazon’s part. An elegant experience would have allowed a customer to navigate to a notes or lists widget with the Fire TV experience minimized and/or paused while in picture-in-picture (PiP) mode, then allow them to update their shopping list with a quick voice command before returning their program in full-screen.

The device does support PiP for watching a live camera feed — like the nursery cam or doorbell — while watching a show or recipe video, which is handy. You can also enable this by voice, by first asking Alexa to play a TV show, then saying something like “Alexa, show me…,” followed by the name of the camera feed you want to see. This PiP feed can be dragged around on the screen, too.

The remote’s home button will launch the Fire TV experience at any time, and the Live TV and quick-access provider buttons (e.g. for Netflix, Hulu, Disney+ and Prime Video) will take you directly to those services. Still, the lack of continuity between touch and remote control-based navigation could be challenging for the less technically savvy, such as elderly people who still struggle with using their iPhones, for example.

Once you’ve set up and used Fire TV, a widget will be added to your home screen — if you don’t already have your screen full of widgets. (Fire TV is only added if you have 9 or fewer widgets installed.) Otherwise, you can click the + symbol from the widget in the Widget Gallery to add it.

When not in use, the Echo Show can display a photo slide show, like a digital photo frame would, or can display artwork or other stock imagery, like nature photography, if you prefer.

While not widely publicized, the Echo Show 15 will work with Amazon’s Echo Buds for a private listening mode with noise cancellation. (Sadly, it could not identify a set of AirPods). You can, however, stream from your mobile to Echo Show 15 or from the device to a Bluetooth speaker, if it doesn’t require a PIN code. (Specifically, it supports A2DP and AVRCP, the latter for voice control of connected mobile devices, but not Mac OS X devices.) 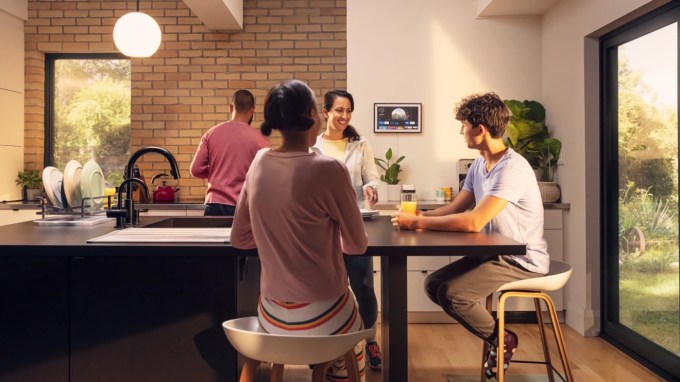 Overall, the Fire TV 15 could work for someone who wants a wall-mounted device, or something to replace a more dated, smaller-screen TV for their kitchen (ahem, big kitchen with lots of wall space, that is!). It could also perhaps work in another room of the house, like a garage workshop, craft room, guest room, or any other extra space where you don’t want to invest in a full TV as you would for a living room, den, or playroom.

But it could be difficult for the device to find a large audience, as it’s attempting to carve out a niche somewhere in between the use case for touchscreen media devices like Apple’s iPad and more affordable, smaller screened sub-$100 TVs. Its lack of an included stand may also put off some consumers who don’t think the couple hundred dollars (plus or minus, depending on sales), is worth it when smaller, non-mountable Echo Show devices are much more affordable. Plus, Google is teasing its upcoming Pixel tablet will offer a charging speaker dock, which is a clever combination of a viewing screen for the kitchen and a tablet for your portability needs. Amazon, of course, is banking on consumers paying for the Alexa functionality and smart home controls, which may appeal to some — if you have a spot for such an oversized device in the first place.