From Chasing Paper To Chasing Business 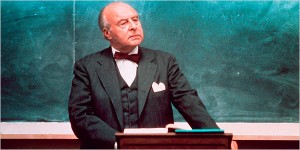 I am surprised that ATL has not said anything (at least nothing that I have been able to find) about the death of the lawyer and author John Jay Osborn Jr. On second thought, that’s not all that surprising since the only peeps who would even recognize his name are those of dinosaurial vintage like mine. However, in the early 1970s, Osborn was famous. He wrote the book “The Paper Chase,” based on his first year at Harvard Law School, and it was subsequently made into a movie several years later and, of course, a TV show, airing for one season on CBS and for three seasons on Showtime.

John Houseman won the Oscar (and other awards) for best supporting actor as contracts professor Charles W. Kingsfield Jr. (Of course, since I live in LaLa land, you knew there had to be a Hollywood tie-in.)

Amazon’s website lists a 40th anniversary edition (nothing about a 50th, though). Is there anyone who graduated law school in the 1970s who still remembers the book or, if not, at least the movie or the TV show? Anyone younger than a dinosaur who read the book and/or saw the movie and/or TV show and thought law school was the right thing to do?

The book was published in 1971, when a confluence of factors started to make law school more attractive. One was the draft and the possibility of a deferment to avoid going into the throes of the Vietnam war, by then hugely unpopular, but still ongoing. Another was the Second Wave Feminism movement, women like me who had not gone to college just to get a “Mrs.” but who wanted to pursue professional careers, such as physicians and lawyers. I argued with my then boyfriend, headed to UC San Francisco Medical School, who wanted me to do the “Mrs.” thing. That relationship went pffft (not a legal term).

When “The Paper Chase” movie arrived a few years later in 1973, everyone I knew (and that was limited to classmates in law school, because who had time for friendships outside of school?) thought that the movie was right on. We were in our first-year contracts class (we didn’t have John Houseman as our professor), but an adjunct who wrote the most fiendish exams. I passed contracts, but it wasn’t easy.

We all thought that the movie depicted well the horrors of the first year. Finding study partners, making outlines (remember those?), learning how to research (books and Shepard’s, internet research only arriving decades later), fearful of being called upon in class and being unprepared (or at least not prepared in the way the professor expected), writing practice exams, and so on, accompanied by generalized freaking out when we realized that the entire first year depended upon final exam grades.

It might have been in the book, it wasn’t in the movie, but I remember the professor who conducted orientation for my incoming class, which was the first day class at Whittier Law, then known as Beverly College of Law. The professor said in stentorian tones, “Look to the left, look to the right, and two-thirds of you will not be here beyond the first year.” He was right. The school flunked out students whom it didn’t think would make it past the bar exam.

The New York Times obituary said that Osborn had a varied legal career; he clerked, he worked in Biglaw for a brief period, he taught contracts law (following in the fictional footsteps of Professor Kingsfield), and he was an estate planning lawyer. His career, like so many others in the profession, took various twists and turns throughout his life. Despite what peeps may say, options do abound in the law, it’s just a matter of how you want to spend your professional life.

For another cruise down memory lane, how many dinosaurs remember when The American Lawyer first hit the legal world? In the mid to late 1970s, the United States Supreme Court blew the doors off the profession’s secrecy in two cases, just a couple years apart. First, there was Bates v. State Bar of Arizona, which held that attorneys had the right to advertise their services, and then, several years later, Goldfarb v. Virginia State Bar, holding that lawyers were engaged in commerce and thus, were not longer exempt from antitrust laws. Bye-bye, fee schedules, lawyers were now free to charge whatever the traffic would bear.

Shortly after that, Steven Brill started The American Lawyer, figuring that the time was ripe for transparency about law firms (aka Biglaw), and their inner workings, specifically a myriad of financial details, revenues, profits per partner, and all those things that had been talked about only behind closed doors. A friend of mine who practiced in Manhattan in those days told me that American Lawyer “rapidly made its way from bathroom (behind closed doors) to the inbox of every partner and the eager hands of every associate.” It was bathroom to boardroom, People magazine for lawyers.

There’s a good discussion of how The American Lawyer changed the profession in a chapter in a new book, “Servants of the Damned” by David Enrich, which details the rise of the megafirm, specifically Jones Day, and its cozy relationship with the former president. It’s a fascinating read; I couldn’t put it down.

I wonder what the profession would be like today without The American Lawyer. Brill admits in the book that he created a monster, and indeed he did. Would the profession be less cutthroat and more civil? Would it be more collegial and less “eat what you kill?” Your thoughts?

Jill Switzer has been an active member of the State Bar of California for over 40 years. She remembers practicing law in a kinder, gentler time. She’s had a diverse legal career, including stints as a deputy district attorney, a solo practice, and several senior in-house gigs. She now mediates full-time, which gives her the opportunity to see dinosaurs, millennials, and those in-between interact — it’s not always civil. You can reach her by email at oldladylawyer@gmail.com.

What you should know about taking workout supplements

Stablecoin Exchange Inflow Mean Hits ATH, Why This Could Be Bullish For Bitcoin