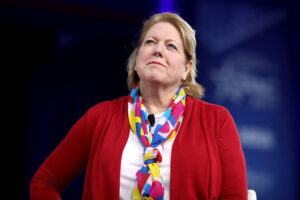 Ginni Thomas is so much more than just the wife of a Supreme Court justice. The right-wing political operative’s fingerprints — or more accurately emails and texts — are all over the conservatives’ Big Lie about the 2020 election.

There were the… questionable text messages with Mark Meadows, Trump’s chief of staff. And she launched a campaign targeting state republicans asking them to just pick their own slate of electors sympathetic to Trump, regardless of the actual election results. But it was finally her correspondence with coup architect John Eastman — that he couldn’t wait to dish about — which caught the attention of the January 6th Committee.

After receiving the request for testimony from the Committee, she began posturing as if she’d comply, saying, “I can’t wait to clear up misconceptions. I look forward to talking to them.”

But then the stinking lawyers got involved.

Her attorney, Mark Paoletta, reportedly wrote to the Committee backing the hell away from the premise that Ginni would prance in there and willingly testify. Saying, he needs “a better justification for why Mrs. Thomas’s testimony is relevant.”

“As she has already indicated, Mrs. Thomas is eager to clear her name and is willing to appear before the Committee to do so,” he wrote. “However, based on my understanding of the communications that spurred the Committee’s request, I do not understand the need to speak with Mrs. Thomas.”

Paoletta also downplayed Ginni’s communications with Eastman (the ones Eastman fought so hard from turning over to the Committee):

“An invitation from Mrs. Thomas is an invitation to speak, and nothing more,” he wrote. “It is not an endorsement of the speaker’s views, nor is it any indication of a working relationship between the speaker and Mrs. Thomas. In fact, Mrs. Thomas often does not share the views of those invited leaders or activists.”

The letter notes “the Thomases have been subjected to an avalanche of death threats and other abuse.” Oh, you mean like the death threats Shaye Moss and Ruby Freeman received because of the bald-faced lies about the 2020 election? The kind that Ginni Thomas willfully peddled after her preferred candidate lost? Hmmmm.

Listen, I am NOT condoning violence of any sort, but any blowback on the Thomases seems entirely of their own making.

Shiba Inu Hops By 45% In A Week – What Could Have Pushed SHIB Up?