Handing out 10 awards from the Eagles-Cardinals game

The Philadelphia Eagles remain the NFL’s lone undefeated team at 5-0, after taking care of business (to put it kindly) out in the desert against the Arizona Cardinals. As always, win, lose, or tie, we hand out 10 awards.

1) The ‘Sneaks and Screens’ Award: Nick Sirianni and Shane Steichen

The Eagles ran 71 plays on Sunday, and they were all either QB sneaks or quick screens to the perimeter, or at least it felt that way.

The Eagles scored 20 points, which is more than the 17 points the Cardinals scored, but it was also the worst offensive performance the team has put together this season.

The Eagles engineered a clock-draining, 17-play, 70-yard drive that ended with a field goal and gave the Eagles a lead with under two minutes to go. It went like so:

The Eagles’ offensive line is masterful in those situations.

Of course, in the drive sequence noted above, the play that stands out is the pass for 16.

That was on 3rd and 11. The original call was a man beater, but Jalen Hurts checked to a play with three-step drop, Goedert found an open area of the Cardinals’ zone, Hurts put the ball on him, and Goedert did the rest after the catch. That was the biggest play of the game for the Eagles’ offense.

4) The Thank You Award 🙏: The Cardinals’ clock operator

On the Cardinals’ final drive, Kyler Murray scrambled on 2nd and 10, and made major mistake when he slid short of the first down marker, bringing up 3rd and 1. The Cardinals then rushed to the line, and Murray spiked the ball, bringing up 4th and 1.

If you were watching on TV, you were no doubt puzzled by what Murray and/or Cardinals head coach Kliff Kingsbury were thinking on that sequence.

In the stadium, the scoreboard displays read “1st and 10” after the slide, even though the sticks never moved. It appeared to me that the Cardinals thought they got the first down, hence the spike. OOPS!

And so, on came backup kicker Matt Ammendola to try a 43-yard field goal to tie it up on 4th and 1, and well, we’ll get to that momentarily.

There’s only so much one can criticize the Eagles’ defense on a day that they only allowed 17 points, I suppose, but their tackling on Sunday (or lack thereof) looked a lot like their poor tackling performance Week 1 against Detroit. That has to get cleaned up.

Brown had a weird day. He did not play on the first four snaps of the game, and then when he entered, he was targeted on three straight plays. He only had four targets the rest of the day, and only one second half target, which was with 11:32 left in the third quarter.

It was particularly strange that Brown did not get targeted frequently, considering he is such a yards after catch beast, and the Cardinals have a secondary full of undersized players. Why not throw some of those foofy wide receiver screens to him?

7) The ‘Battler’ Award ⚔️: Jason Kelce and the offensive line

Kelce was clearly in a lot of pain when he went down in the second quarter. He came out of the game, and even went to the locker room. At the start of the second half, however, he was right back in there. There was a point in this game in which the Eagles were down three offensive line starters (Jordan Mailata, Landon Dickerson, and Kelce), in addition to backup LT Andre Dillard, who is on IR. Their line looked like this:

Having three injured offensive line starters would sink a hell of a lot of teams around the league, but the Eagles heavily value O-line depth, and they were able to stay afloat.

8) The ‘Dicker In, Dicker Out’ Award: Cameron Dicker

Cameron Dicker’s tenure with the Philadelphia Eagles will be short. He was signed by the team on Tuesday, and he’ll probably be waived this week to make room for the return of Jake Elliott. If indeed his Eagles tenure is only one game, it will have been a successful one, as he was 2/2 on field goal attempts, as well as 2/2 on PATs.

He was certainly better than Cardinals kicker Matt Ammendola, who was also filling in for an injured kicker. Ammendola missed a 43-yard field goal, sealing the Eagles’ win.

Dicker signed with the Rams as an undrafted free agent despite the presence of Pro Bowl kicker Matt Gay, and went 3/3 on PATs in his lone preseason game appearance with L.A.. He was released in mid-August. He then signed with the Ravens to play in the final preseason game to give GOAT kicker Justin Tucker a rest, and was promptly released thereafter. He made his lone FG attempt and was 2/2 on PATs in that game. To be determined where Dicker will land next, but he likely earned another opportunity somewhere.

There were a lot of Eagles fans in and around Phoenix this weekend, and as expected, they flooded State Farm Stadium. There was more green than red in the stands on Sunday. 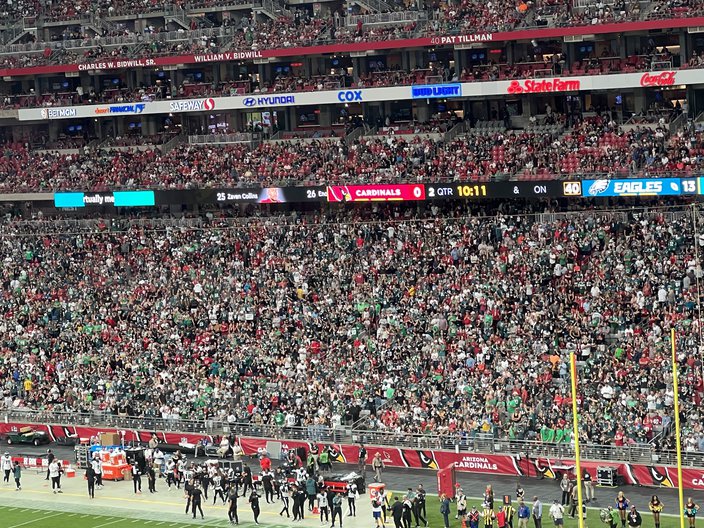 Please don’t do Eagles chants while I’m trying to sleep during my flight home, thank you in advance.

10) The ‘NFC East Frontrunner’ Award 🏆: The Eagles and Cowboys

Well, except for the Commanders. Their season is already over.

The Eagles will have a HUUUUUGE matchup Week 6, when they take on the Dallas Cowboys on Sunday Night Football. The winner of that game will be the early  frontrunners in the division.