Heads Up, Mediation Professors! That Oculus Headset Could Be A Tax Write-Off 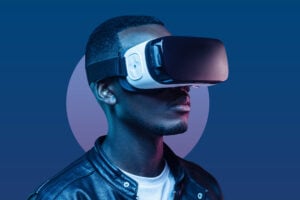 Ask any trial lawyer or mediator: good story telling is a bedrock of legal representation. A fine bit of oration has for a very long time been the fine line between guilt, innocence, windfall, and tough break. But as technology develops, attorneys are discovering new tricks to the trade. Most people think of VR headsets and goofy pixel renderings of Mark Zuckerberg that are — somehow — still Photoshopped.

But there are practical applications of the technology that go beyond Formerly Facebook’s™ PR stunts. Turns out, seeing from a different point of view can make a world of difference when mediating.

“I believe the majority of the cases that we have used VR have been vision-related cases. And the purpose of VR with vision-related cases is it’s really the only way you can allow the audience to fully grasp what that person is or is not able to see as a result of their injuries,” said Cynthia Landon, visual litigation strategist at High Impact.

Reikes and Landon pointed to a specific case where a child had lost his vision as a result of a medical malpractice and attorneys decided to use VR to show parties involved in the mediation the extent of its loss of vision.

“We were able to create an exhibit that showed his very limited vision,” Landon said. She added, “we took that and the goggles to mediation with the other side and everyone was allowed to look through the goggles and see the loss of his vision and it was very emotional. … It’s a super powerful tool which I think is also why it works so well in mediation.”

Another niche use of VR in mediation pertains to accident reconstruction. But why stop there? Imagine how much more memorable Torts could be with a virtual reconstruction of that fateful moment before Ms. Palsgraf tried to board the train? Looking up and seeing the package that everyone associates with duty of care? I patiently wait for the day that walking in someone else’s shoes moves from cliché to technical possibility. Not their literal shoes, but you get my drift.

Forget the Courtroom—VR Has Bigger Role to Play in Mediations [Law.com]

Elrond (EGLD) Price May Break Past The $56 Hurdle