Herschel Walker Threatens To Sue Over Veterans’ Ad Impugning His Unimpeachable Honesty, Which Is Complete And Without Blemish 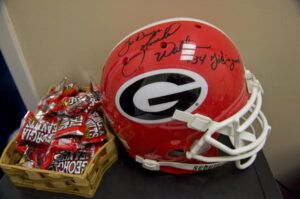 Herschel Walker, the retired football player running for senate in Georgia to ensure that China doesn’t take all America’s good air, is very mad that people keep calling him a liar.

Just because he claimed to be a high school valedictorian, who graduated from the University of Georgia and went on to found a breaded-chicken empire while moonlighting as a police man and fathering  some number of children doesn’t mean he’s a fundamentally dishonest person, okay? And he doesn’t appreciate a veterans group calling him out for “lying” when all he did was take money to endorse a for-profit program which allegedly targeted veterans and service members while defrauding the government.

But the AP, which flagged the above quotes and has been all over Walker from the jump, reported in May that Walker didn’t start the program at all, and is, in fact, a paid spokesman earning $331,000 last year alone. And Patriot Support is no “military program” either. It’s a for-profit company run by the hospital chain Universal Health Services, which was accused of misdiagnosing mental health patients, sometimes forcing them into involuntary psychiatric hospitalizations to maximize profits.

“To maximize the flow of military patients, UHS engaged in an aggressive campaign … to market its ‘Patriot Support program,’” a company whistleblower who ran the admissions program at a Utah hospital stated in a 2014 court document.

As a celebrity spokesman, Walker was part of the public relations blitz.

Universal Health Services reached a $122 million settlement in 2020 with the Department of Justice and the coalition of states. The company denies government’s allegations and said it agreed to the settlement to “avoid the continuing costs and uncertainty of continued litigation.”

Vote Vets, a liberal advocacy group, put out this ad attacking Walker for his relationship with Patriot Support.

“Herschel Walker said he had this great program to help us. But he lied to us,” says Paul Martin, a Purple Heart recipient who suffers from PTSD, before describing the allegations in the AP story.

In response, Trumpland lawyer Stefan Passantino, who was recently fired when former Mark Meadows aide Cassidy Hutchinson decided she wanted to be more candid with the January 6 Committee, dropped this nastygram on station managers who dared to air the ad.

The Advertisement, entitled “Purple Heart” features an individual making a categorical allegation that Herschel Walker “lied to us” when he advised verterans that he was associated with a program designed to assist them. The Advertisement shows zero evidence to substantiate the claim that Herschel Walker lied to veterans. In reality, through this organization, Herschel Walker “shared his personal journey to raise awareness and encourage others to seek help” with mental health struggles. Official U.S. military installations have said that Herschel Walker brought with him “a message of supporting mental wellness through the Patriot Support Program.” To construe this as lying to veterans is defamation in its clearest form.

Saying that his letter will demonstrate “actual knowledge” of the falsity of the ad’s claims, Passantino demands that the station yank it immediately, before pivoting to defending his client as a friend to veterans who is practically a Marine himself.

“In fact, Mr. Walker served as a national spokesperson for Patriot Support and its Anti-Stigma campaign from 2010 to 2021, sharing his personal journey to raise awareness and encourage others to seek help when needed,” he writes, omitting to mention the substantial compensation package associated with his client’s beneficence. “Indeed, before Herschel Walker became a football star, he wanted to be a Marine. Though life took him down a different path, Herschel’s love and desire to serve our great military has not wavered.”

Would it shock you to learn that this letter was given to the conservative Washington Free Beacon and no one else? Would you faint dead away to learn that the Beacon failed to link to the AP story in its reporting?

“Should such false and defamatory publication occur after receiving information in advance of publication of its falsehood, it can only be undertaken with actual malice and reckless disregard for the truth,” Passantino threatened in closing. “In that instance, we will act accordingly to protect our clients’ interests.”

Which is very on brand for a Trump lawyer and a candidacy engineered entirely by Trump, who convinced Walker to up sticks from his longtime home in Texas and run against Raphael Warnock. In 2020, the Trump campaign threatened to sue multiple stations for airing ads critical of his coronavirus response, and actually filed suit against a station in Wisconsin. It also threatened to sue CNN for airing a poll which showed it losing to Joe Biden, with hilarious results.

.@CNN “reported” on our letter sent privately without linking to the full letter, then tweeted their response.

Another attempt to skew the narrative!

Here is the @TeamTrump letter we sent yesterday, out of actual transparency. pic.twitter.com/tcPbQov2kE

Wonder why Walker couldn’t get Jenna Ellis to work her magic on his behalf during this election cycle. Is there some reason she might not want to be spending a lot of time in the state of Georgia right now? Hmmmm.

Well, it seems like we’ve all learned an important lesson here, and that is that Herschel Walker is a warrior for free speech, sticking up for the little guy and the small business owner against well-funded elites trying to silence him.

A Deep Dive Into GameFi Models