There’s a sullen moment early on in “Hustle,” the new basketball drama streaming on Netflix, when Adam Sandler’s Stanley Sugerman muses to himself at Philadelphia International Airport.

“Guys in their 50s don’t have dreams,” Sugerman thinks, dragging a suitcase behind him. “They have nightmares and eczema.”

Sandler’s middle-aged Sugerman, a former Temple Owls star and longtime talent scout for the 76ers, had recently been promoted to his dream job as an assistant coach for Doc Rivers, the real-world coach in Philadelphia. The team’s fictional owner in “Hustle,” Rex Merrick (played by Robert Duvall), died suddenly after making the promotion and left control of the team in the hands of his arrogant son, Vince, who never shared his father’s affection for Sugerman.

Vince Merrick dispatches Sugerman around the world and away from his family, back to the hustle yet again, to hunt for glimmers of NBA talent to bring to the Sixers.

“Hustle” magnifies the physical and mental grind on the fringes of the NBA’s fiercely competitive, hit-or-miss-badly scouting pipeline.

For Stanley Sugerman, it’s a labor of love and sacrifice that shows he’ll put everything on the line for a prospect he believes in — in this case, unknown Spanish street ball player Bo Cruz, who’s played by Utah Jazz forward Juancho Hernangómez.

There are inflated egos, team politics and the powerful allure of life-changing money for hoopers obsessed enough to bet their futures on basketball.

Filmed in Philadelphia and surrounding areas during 2020 and 2021, “Hustle” finds a satisfying balance between Sandler’s bread-and-butter comedic gifts and the more complex side he displayed in the critically acclaimed “Uncut Gems,” the Safdie brothers’ 2019 drama that also used the real-life NBA as a storytelling vessel.

For Sandler, 55, working on movies like “Hustle” now appears to be the dream, every bit as much as taking down Shooter McGavin and igniting brown bags of poop were his happy adventures in the 1990s. Sandler is fully in his element in “Hustle,” a film co-produced by his Happy Madison Productions and The SpringHill Co., led by LeBron James and Maverick Carter. Directing duties were handled by Philly native Jeremiah Zagar. 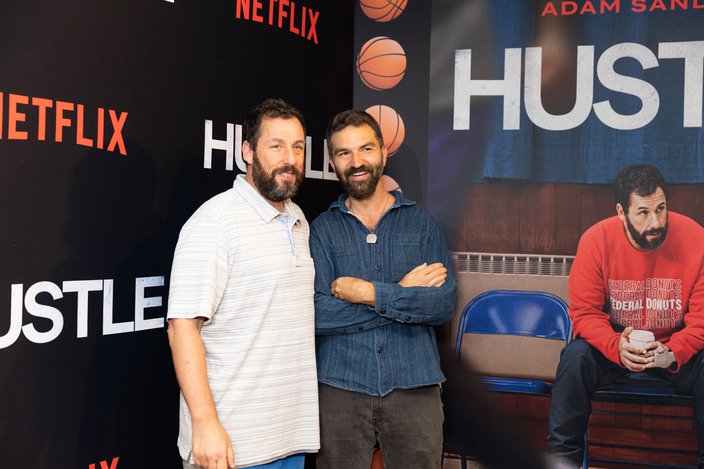 Adam Sandler and ‘Hustle’ director Jeremiah Zagar appear together on the red carpet at the film’s premiere in Philadelphia.

The clout James brings to a movie like “Hustle,” without him having so much as an appearance on-screen, is evident in the long list of cameos made by current and former NBA players, from Anthony Edwards and Tobias Harris to Trae Young, Tyrese Maxey, Julius Erving and the “NBA on TNT” crew.

Their existence in this parallel NBA world gives “Hustle” the star power it needs to contrast with the grueling quest that Sugerman and Cruz must take to reach the NBA.

Skills training scenes are some of the more standout sequences in “Hustle,” flashing Hernangómez’s physical gifts and delivering the endless satisfaction of basketballs splashing through hoops. These montages are fundamental to establishing the movie’s emotional connection between Sugerman and Cruz, earning some of “Hustle’s” more sentimental moments. Anyone who’s ever woken up for early practices or workouts with a buddy knows what they can do to bring people closer together.

The atmosphere that Philadelphia provides to “Hustle” also is undoubtedly one of the film’s best attributes and a point of pride for Zagar. His father, Isaiah, is the artist behind the iconic Magic Gardens on South Street. Zagar knows the city well and how to make it pop on screen. 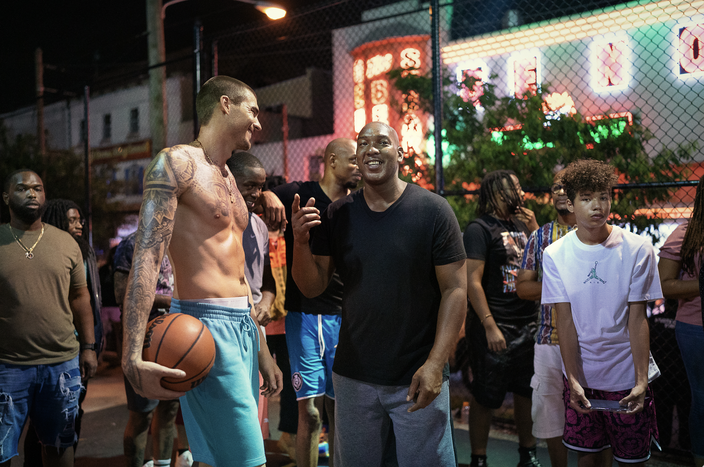 From the rowdy pickup games at South Philly’s Capitolo Playground to Cruz’s pre-dawn runs up DuPont Street in Manayunk — with Sugerman keeping time in a trailing car — “Hustle” puts Philly in a beautiful light that sets a mood much the way “Creed” did in 2015. The city’s murals, gymnasiums and the ritzy Loews Hotel in Center City all give “Hustle” a sense of place that makes the movie’s setting visually memorable.

And for the most part, “Hustle” doesn’t exploit Philadelphia sports tropes or take advantage of stereotypes about Philly fans. The quips about the people here are mostly fair.

“Philadelphia, baby. You’re gonna love it. Best sports fans in the world,” Sugerman tells Cruz when they arrive from Spain. “Actually, the worst, but that’s what makes them the best.”

It might have been nice to see that fan dynamic a little bit more in “Hustle,” for a city that puts such relentless pressure on its pro sports teams, but the movie’s aims were more about weaving as many jokes and cameos into a sincere plot about perseverance. The roughly two-hour run-time is a little longer than expected, which may put some viewers off, but anyone from Philadelphia certainly will savor the city’s screen time.

The real force of the film — and the crux of the relationship between Sugerman and Cruz — is its exploration of how life choices can derail the dream of a professional basketball career.

Sugerman, we learn, severely injured his hand in a drunk driving accident while he was a college player at Temple. His teammate Leon Rich (played by Kenny “The Jet” Smith) also was in the car and missed the rest of the college season. Sugerman spent six months in prison dwelling on his mistake, which cost the Owls a shot at an NCAA title. His long tenure as a Sixers scout is a testament to the late Rex Merrick’s willingness to give him another try, which Sugerman, in turn, extends to his troubled prospects.

Cruz, the father of a young girl in Spain, has a past aggravated assault charge that scares the Sixers and NBA talent evaluators away from him. Cruz explains to Sugerman that he lost his temper when the mother of his child got a new boyfriend, who wanted to take custody of the child in order to get government benefits. Cruz ended up fighting the man and it cost him an invitation to play basketball in Latin America. He was relegated to a construction job to support his daughter and his mother.

When Sugerman finds Cruz on a community court in Spain, he’s playing in a pair of work boots and still dominating the competition. The scout is mesmerized and makes a fool of himself trying to track Cruz down.

Hernangómez, who in real life rose through the ranks of Spain’s Asociación de Clubes de Baloncesto, does a convincing job portraying the rigors of life as an overseas prospect. Drafted by the Denver Nuggets in 2016, Hernangómez has been a bit of an NBA journeyman in recent years, especially during the filming of “Hustle,” which saw him shuffle from the Minnesota Timberwolves to the Boston Celtics and then the San Antonio Spurs, before landing in Utah.

There are occasional moments in “Hustle” that can seem a bit a strained, like Vince Merrick’s appearance on a fictional TV show hosted by Philly sports radio veteran Anthony Gargano. When Gargano asks about Cruz’s criminal past, Merrick publicly denies the Sixers’ interest in Cruz and takes a harsh dig at Sugerman, who had quit the organization in anger to stick with Cruz.

That kind of media moment is hard to picture from a sports franchise owner in Philadelphia, especially over a little-known basketball prospect from Spain. In fairness, the movie did establish that the elder Merrick was a man of the people. His son wants to appear in control and might conceivably use the media in such a way to craft his public image. Gargano’s lines sound exactly like they would if he were speaking on the radio, which is a bit surreal. His appearances in “Hustle” are ultimately a nice touch.

It helps to remember that former Sixers general manager Bryan Colangelo created a burner Twitter account to bash his team’s own players, shape public perceptions and defend the size of the collars on his shirts.

If that can happen, pretty much anything that took place in “Hustle” is fair game. Sixers fans might watch this movie and genuinely question whether the real team or the one in the movie is more of a mess.

The appearances of Harris, Maxey and Matisse Thybulle are all welcome moments, even if the players don’t do much talking. Maxey excitedly mumbles something about Jrue Holiday, Thybulle is always smirking and Harris has an entertaining one-on-one game with Cruz. There’s no Joel Embiid, other than Sugerman wearing a No. 21 jersey and calling Vince Merrick an “idiot” for thinking about packaging the big man in a trade for a top draft pick.

Elsewhere, the supporting role from Queen Latifah as Sugerman’s wife, Teresa, gives “Hustle” plenty of opportunities to create organic humor of the kind Sandler has adapted to fit his age over the years. Here, Sandler is the fat old guy who takes all of the jokes at his expense in stride, dishing them out crudely and liberally on his own, no matter how corny they may be. 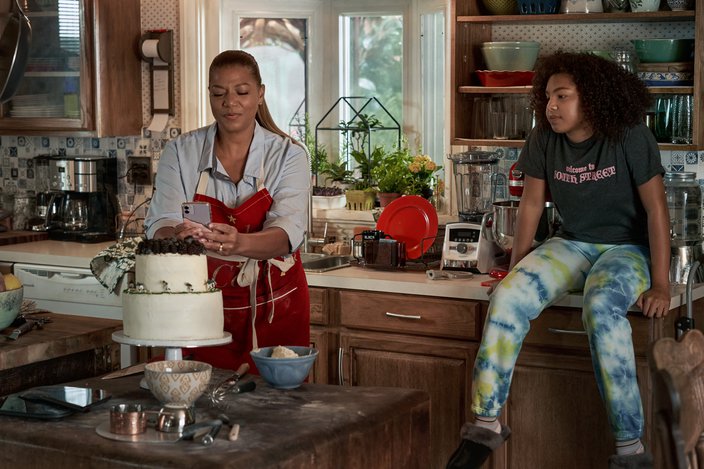 This Sandler character archetype — the man with real responsibilities, who first showed up in “Big Daddy” — reaches a new level in “Hustle.” Sugerman is a determined leader committed to his craft, his values and to imparting the life lesson that many of our greatest obstacles are really “you versus you” contests.

Knowing this and acting accordingly is much more important than worrying about factors outside of our control, whether it’s about becoming an NBA player or taking a shot at any other big dream.

If there’s a solid message here beyond the fashionable fun of NBA fan fiction and elevating Philadelphia as a showpiece, it’s that the dreams we have are fragile enough on their own. Anyone chasing them has to block out the external obstacles and obnoxious doubters along the way, to have any chance.

Sandler may now have nightmares and skin problems, but his career as an actor looks to be in a fun place, these days. This version of Sandler is one that a generation of “Billy Madison”-quoting disciples grew up deserving to eventually see. One of the joys of “Hustle” is watching Sandler’s ownership of a role that mixes his bull****ing  humor with his penchant for creating warm moments.

“Hustle” is an interesting test of how well a film like this can age, especially when it draws so closely from momentary NBA circumstances in real life. In the movie, yes, Sugerman got his coveted assistant coaching job back. Cruz landed a spot on the Boston Celtics, as briefly did happen for Hernangómez in real life.

But with Sixers fans calling for Doc Rivers’ head and Hernangómez watching the Celtics in the NBA Finals, from home, it’s clear that the real life sports world is even more cutthroat and fast-paced than a movie could hope to capture. The Bo Cruz players out there are going to need Stanley Sugermans to enter the conversation about playing in the NBA. A promotional platform on Dr. J’s Instagram account wouldn’t hurt, either.

What is Industrial Hemp? How Is It Used?