In hatred, about it – INNFINITY 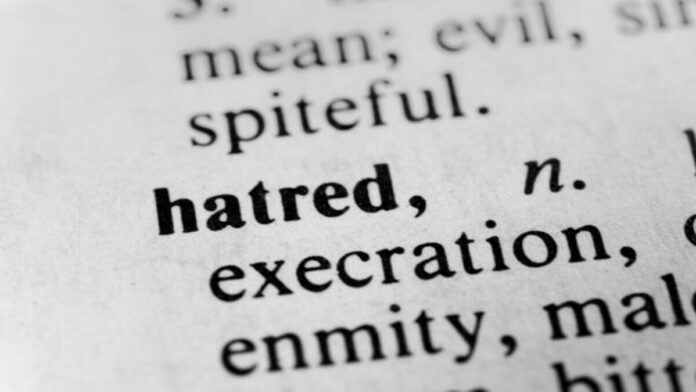 Love to hate might occur as being an oxymoron of a different kind but it perhaps is still true in doing what it preaches to. Alluding to the intensity in hating being at least as pronounced as the enormity of what it might mean to love is what this phrasal conjuring up of the opposites intend to dwell on in much realness of it. To comprehend hate in terms of love or vice versa might not strike as the most appropriate of tactics in analysing either but it is in the very dramatic divergence of their dynamics that this particular way in expressing asserts as the most convenient technique in this regard.

But why would something as intolerable as hate need to be defined in dimensions of the heart warming awareness that love is? Perhaps because both stems within that biological basis of the blood pumping organ of the human body that which ideally reveals itself instead in a more love inclined reputation of it. Or because of that another strand of similarity shared between them in being a learned behavior that takes deep root within the profound human awareness to assume instead the more encompassing form of what sound as the enriching expression of the emotions. Or most prominently because the tendency to want to hate vs the one in coming to hate someone is so strongly insinuating of that awareness in the negative that makes this whole narrative in loving to hate turn out to be the so striking surmising of sentiments that it is.

Hate matters but not in the way mattering should adhere to- as a case in consciousness, one that furthers thus a significance that what mattering should feel like. Instead hate manages to make feel its wavelength in negativity by being an awareness in immenseness so absorbing that eats up the entire essence of what existences should preferably be. More surprisingly though, hatred ends up being so capable of yielding such power by virtue of the influence it exerts as being in fact an extension of the internal essence of our own.

Very often we hate not as much out of spite for the one we proclaim to, but rather in seeing them something that we love enough to hate seeing it being accruing instead to someone outside our own. And it is this premise of hatred nestled in a certain mix of jealousy and insecurity and also resident in a specific fear of the unknown or even something known enough to emerge as popular that lets it to manifest as the complex but convenient psychological ‘safe space’ that it should not ideally be.

To even see hate as being encompassing of a safe space is a prospect in alarming realisations but to come to know that this way in coping indeed tends to be a fairly well established, even if largely involuntary means in existing is terrifying to say the least. The repercussions of such hatred directed towards the self as a survival strategy- toxic but ‘popular’ still might be well explored. But even in general hate seeks to permeate entire sips of the poisonous drink that one takes to quite so often to quench the unbearable thirst for something that however only intensifies in that desire eating away at the inner annals of the soul with every gulp of it.

To let hate inflict such harm on ourselves makes for a supposition much contradicting of the uplifting and rejuvenating and the living prospects of love. But to the extent of the passion with which we entertain this mode in unleashing all that spite somehow managing to make home within out hearts, hating isn’t much different in its processing than love itself. Hatred is akin to love also in the power of it. Both can be extremely affecting of our lives, no matter in how much opposing measures of their own type, so much so that sees them aligning themselves across the same scale of dynamics of course in different end of it.

The power that we speak of, that makes both hate and love potent enough to influence our lives in dramatic almost a measure, might be more than apparent in the latter case of its consideration. Hate appeals the way love should because it can be as convenient a fore in comfort. That is to say in fostering belongingness a mutual feeling in hate or extreme dislike can be surprisingly effective- perhaps even more than the similar such effect of love itself. And so we chart out hate as yet another way in charting the route of what leads us to social inclusion in much prominent display of the human nature.

Hate however tends to ‘benefit’ also from the greater understandings of it. Hate might be an emotion itself but at the same time it also rules over a broader spectrum of many an emotions that border somewhere on the sphere of the negative. Almost every feeling that takes over as an intense awareness of the unwanted be it anger or disgust or even certain forms of fear as well as the unfavourable existence in loneliness can and does ‘represent’ hatred. Interestingly though, while hatred can be one definite way in bonding, the attempt to employ hate as the source from which a connection seems probable can itself make way for some kind of contempt instead to find expression.

To derive more ‘sense’ out of hate, it might be helpful if one takes into consideration the early social basis for its arising. Way back in times when society wasn’t in any way the entity that it is today, hatred might have been a natural entailing out of some perceiving in collective threat. And it is in this wiring of the threat prospect in our minds that humans have today come to harbour hate for something or someone in such extensive measures that have them wishing even really bad for the object of their hatred. This should classify almost as some case in evolutionary mismatch but the fact that it persists still as one of the many traits to have resisted getting lost in the the trance of evolution just speaks of the more than deep rootings that hate has been able to establish itself in.

This exploration of hate as being stirred by some threat as well as emerging itself to be the definite threat itself is what brings it greater power in realisation. To allow hate to find a place for itself within you and let it consume as well your logical reels of the conscious speaks at the same time of the powerfulness of it and therefore the powerlessness of us in the face of it as a very dangerous detail indeed. Even more alarmingly, hatred yields also the absolute power in driving us to harbour for ourselves many an equally destructive affinities of character that themselves can occur as being both the subject and object of hate.

And contrary to the premise upon which we started out as hate being opposite to love for the sake of establishing in totality the stark truth that prevails through the entire ‘love to hate’ professing, hate is not in fact the exact antonym of the way in which love happens. For hate also is as much about attachment as love is- only that the latter case tends to be a lovelier experience of that attachment in at least half the circumstances of its characterisation.

No wonder hate feels good at least in the initial experience of it which is why we tend to be drawn into it. And once we have developed a certain ‘connect’ with this feeling of hatred itself, a bond in much intimacy, it is very difficult to free ourselves from the entanglement of a force as powerful as it is. And so we continue to feed into this outlet of hatred, as a compulsive urge almost too hard to resist even when we recognise its asserting of power as something poisoning of our own physical and emotional selves.

It also is in taking advantage of such affect that hate can have on humans so as to totally consume their being even defying and overruling the grounds of reason and sense and managing to prevail despite sincere efforts to at least undermine its presence that this particularly volatile fore of the emotions is often exploited to the extents of it. So vulnerable are we in falling prey to the nebulous nifties of hate that fostering this nuanced notion of much strained exertions has proved to be a classic tactic of realising many a nefarious intentions arising again within some of us. And thus we are drawn into the vortexes of this culpability that hate holds us strongly in, and so ‘lethally’ indeed that there truly would not be a way out of this life shattering almost chase of the extremes.

And so it continues, like it has been forever doing, the dynamic demonstration of the hate begetting hate reality that which is much frightful a proposition to even consider in the context of human living. In its immense psychologically and emotionally draining concerns, hate is well known in such effects that extends also to define the terms of the physiological. Spewing its venom primarily rested along arenas of the mental across all spheres of what sums up our existences in spirit and soul as well as in health and body, hate has time and again- or rather always established itself as a force that we should indeed hate to love in apt dealing with its notorious character.

Picks and predictions for every game