Jason Kelce on the Eagles’ high expectations: ‘They’re f***ing nothing’

Jason Kelce knows a thing or two about expectations.

He’s been on teams that failed to live up to them, and teams that have more than surpassed them.

But in the end, there’s one thing Kelce wants the Eagles to understand.

“I think we got enough older guys around this building. I think we got enough, whether it’s executives or coaches or players, to understand that expectations are just that, they’re f***ing nothing,” Kelce said Wednesday at the NovaCare Complex. “We gotta go out there and play. The moment you’re comfortable in this league, somebody’s coming for you. We gotta Mr. T in ‘Rocky III.’ He’s gonna be hunting us every single week. We haven’t even won f***ing nothing yet, we’re not even the champion, so we better work our f***ing asses off.”

The Eagles will finally kick off the 2022 season Sunday in Detroit, and do so with buzz and anticipation that has continually built throughout the offseason.

It started with the surprise run to the playoffs to cap off 2021, got a massive jolt when the draft brought in Jordan Davis, Nakobe Dean, Cam Jurgens, and A.J. Brown, and was reinforced throughout the spring and summer months with the trades and signings of Haason Reddick, James Bradberry, Kyzir White, and Chauncey Gardner-Johnson.

On paper, the Eagles look great. They possibly have one of the most complete, and healthiest, rosters entering 2022, and that’s with a full year of experience under head coach Nick Sirianni.

Fans and media have expectations for this team, but again, Kelce’s been there, done that. High expectations create complacency, complacency creates comfort, and in the NFL, comfort means death.

“I don’t like comfort,” the veteran center said. “I think comfort is a terrible place to be if you’re in this league. I know everybody expects us to be Super Bowl champions in Philadelphia right now and I think that can definitely happen, but it’s not gonna happen being comfortable, I can tell you that.

Yeah, Kelce got pretty intense during his time with the media on Wednesday, but the message doesn’t appear lost on anyone in the building. “Dawg mentality” has been something Sirianni’s been preaching a lot the past few months. Players have echoed it too.

“When you talk about ‘Hey, it’s important that we climb every day, that we get one percent better every day, we get a little bit better each day,’ we’re not just saying that to the players, we’re trying to live that as well,” Sirianni said.

And while Kelce quipped that he hasn’t been as blunt or direct with teammates about expectations and comfort as he was with the media on Wednesday, he did say he has been reinforcing some semblance of that message to guys throughout the offseason.

“When expectations are high you tend to let little things go,” Kelce said. “After a win, the tape gets assessed differently. After a loss, the tape gets critical very, very much because people start feeling it. You have to improve everything when you lose…I think that when you’re expected to do well, organizationally, player-wise, team-wise, coaching-wise, all of those little things start to be ‘eh, you know, we’ll get that fixed.’ Whereas when the expectation is low ‘we gotta fix everything right f***ing now, otherwise we’re getting fired, otherwise people are gonna be out on the streets.'”

In the NFL, comfort means death. 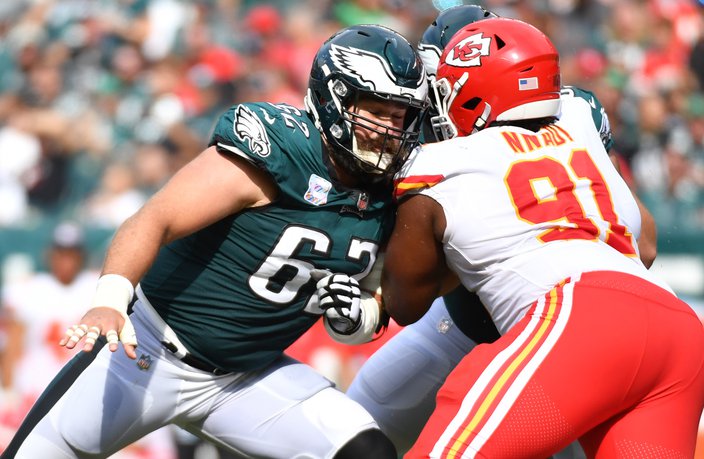 Kelce missed all of the preseason and the bulk of training camp to get surgery for an elbow cleanout. He returned to practice last week and said his arm feels great. The 34-year-old should be ready to go on Sunday in Detroit to begin year 12 and continue his streak of 122 consecutive starts.

This was the first training camp Kelce has ever missed and the most time he’s been away from the field in general. He said it offered a lot of time to reflect, and as someone who has pondered retirement for the past several years, offered a look into what that might be like.

“It’s been unique to kind of experience what not playing is going to be like,” he said. “In some ways you’re able to help more with other guys and really allocate a lot of time to your teammates and things like that, but it definitely makes you realize how much you love playing the game and how much you’re gonna miss when it’s gone and how much it’s gonna frustrate you to not be out there. Because it was frustrating this training camp, I’m not gonna lie.”

How much football Kelce has left in him isn’t clear. He came back for this season and Sirianni has said he wants Kelce on the team so long as he’s coach. And while he’s still one of the league’s best centers, he is getting up there in age, with Jurgens waiting in the wings.

For now, he’s just going to enjoy whatever 2022 brings.

“My dad used to tell me you could walk down the street right now and trip off the curb and your career could be over in a second so enjoy every snap, so I’m gonna do that this year.”