Judge Didn’t Believe Lawyer Had A Stroke. But He Did… Because NO ONE FAKES A STROKE! 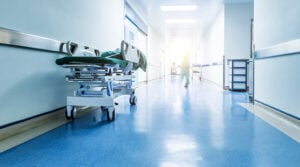 On Monday, Judge Shana Rooks Malone publicly ripped attorney Matthew Tucker when he failed to show up to jury selection in his client’s murder trial. His client informed the court that he’d suffered a stroke, but the judge wasn’t buying it and held him in contempt in absentia and pledged to report him to the state bar. The whole affair was captured by the media camped in the courtroom for the high-profile trial.

Spoiler alert: He had a stroke.

Because OF COURSE HE DID. No one fakes a stroke. Not only are there a million more readily available excuses in the world, but it would commit the attorney to an unnecessarily complicated endgame of having to act out lingering symptoms for the rest of the trial. It wouldn’t make any sense.

Tucker said he was stunned.

“I was astonished. I couldn’t believe it,” Tucker said. “She kind of made me look real bad on TV.”

In fairness, no, she didn’t. She made herself look real bad on TV.

Everyone’s first impression of that rant was “wait, WHY wouldn’t you believe he had a stroke?” More to the point, as a retired judge following this story noted, “Why not say, ‘I really hope he’s alright. If we discover counsel did not have a stroke or some other serious medical issue, I’ll be inclined to hold him in contempt for telling such a lie.’” Exactly. Maybe the judge had some reason to doubt Tucker — as hard as those reasons may be to fathom — but there’s a much more respectful way of dealing with this situation.

Or maybe the judge just wants out of this case. Because that’s almost certainly where this is heading. Tucker told the press that “he may file a motion to remove Malone from the case.”

While he’s at it, he might want to consider a defamation claim. Judges are generally immune from defamation, but that privilege assumes the judge is acting diligently and impartially. There’s at least a fair argument that she wasn’t when she decided to tell television cameras that a lawyer was shirking his responsibilities and lied to the court about having a stroke.

A lawyer suffered a stroke and missed court. A Clayton County judge chewed him out on national TV. [Yahoo]

Earlier: Faking A Stroke Seems Like A Hell Of A Way To Delay A Murder Trial

Week 11 NFL picks: Rounding up the experts' predictions for Eagles at Colts