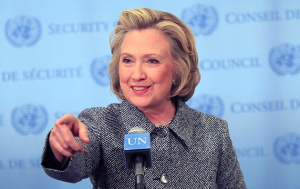 Yesterday, the first sanctions order dropped in the Trump RICO LOLsuit against Hillary Clinton and half of DC, and, friends, it is amazing.

“The Amended Complaint was, in its entirety, frivolous,” wrote a patently furious US District Judge Donald Middlebrooks, adding later, “Not just initiated by a shotgun pleading, this was a shotgun lawsuit. Thirty-one individuals and organizations were summoned to court, forced to hire lawyers to defend against frivolous claims. The only common thread against them was Mr. Trump’s animus.”

In September, the court dismissed this $412 filing fee wrapped around a lunatic conspiracy in which Hillary Clinton and her BFF James Comey were in cahoots to hurt Donald Trump. One of the many defendants was Charles Halliday Dolan, allegedly a source for the Steele Dossier, who was described in the original complaint as a “former chairman of the DNC, a senior official in the Clinton Campaign, and a close associate of and advisor to Hillary Clinton.” In fact, he was none of those things, nor was he a resident of New York. But even after he told this to Trump’s lawyers, they persisted in making substantially the same allegations in the amended complaint.

Here’s how this team of legal eagles defended themselves after continuing to insist that Dolan lived in New York, even after he submitted an affidavit attesting to his residence in Virginia:

[I]t must be noted that Charles Dolan is an incredibly common name, and Plaintiff’s counsel’s traditional search methods identified Case countless individuals with said name across the country, many of whom reside in New York.

On May 31, before the amended complaint was filed, Dolan’s lawyers warned Trump that “if he was not dropped from the original Complaint, Rule 11 sanctions would be sought,” which is how he came to be first past the post with his sanctions motion.

And from all appearances, Judge Middlebrooks has been eagerly awaiting an opportunity to speak his mind.

“The pleadings in this case contained factual allegations that were either knowingly false or made in reckless disregard for the truth,” he went on, noting that Trump’s lawyers claimed to have based their claims on Special Counsel John Durham’s doomed indictment of Igor Danchenko.

“Plaintiff cherry-picked portions which supported his narrative while ignoring those that undermined or contradicted it” Judge Middlebrooks wrote, adding that “The lawyers failed to conduct a pre-filing inquiry into the allegations against Mr. Dolan and have continued to advance Plaintiff’s false claims based upon nothing but conjecture, speculation, and guesswork. This is precisely the conduct Rule 11 is intended to deter.”

Characterizing the case as not just a shotgun pleading but a “shotgun lawsuit,” the court blasted the lawyers for wasting legal resources: “Thirty-one individuals and organizations were summoned to court, forced to hire lawyers to defend against frivolous claims. The only common thread against them was Mr. Trump’s animus.”

So, it was already not looking good for Trump’s sparklemagic lawyer Alina Habba and his boarding school roommate Peter Ticktin, an insurance lawyer whose main qualifications appear to be a Florida bar number and a willingness to put his name on this piece of drek filing.

But then Habba did this.

Was it wise for Habba to go on Sean Hannity and call Judge Middlebrooks “a Clinton judge” who lacked impartiality?

Was it downright idiotic to admit that she’d filed the case against the advice of her client, who told her, “Alina, you’re not going to win, you can’t win, just get rid of it, don’t do the case?”

“[T]he courts are not intended for performative litigation for purposes of fundraising and political statements,” Judge Middlebrooks wrote, through presumably gritted teeth. “It is harmful to the rule of law, portrays judges as partisans, and diverts resources that should be directed to real harms and legitimate legal claims. The judiciary should not countenance this behavior and it should be deterred by significant sanctions.”

And as someone who reads Trump’s legal filings all day long, it seems worthwhile to quote the court at length here. Because this abuse of the judicial system is more than an embarrassment to the profession — it erodes faith in democratic norms, and every part of our professional community needs to start calling it out before it becomes standard operating procedure.

So who is responsible for this case and others like it? The rule of law is undermined by the toxic combination of political fundraising with legal fees paid by political action committees, reckless and factually untrue statements by lawyers at rallies and in the media, and efforts to advance a political narrative through lawsuits without factual basis or any cognizable legal theory. Lawyers are enabling this behavior and I am pessimistic that Rule 11 alone can effectively stem this abuse. Aspects may be beyond the purview of the judiciary, requiring attention of the Bar and disciplinary authorities. Additional sanctions may be appropriate. (DE 280). But legal filings like those at issue here should be sanctioned under Rule 11, both to penalize this conduct and deter similar conduct by these lawyers and others.

The court assessed $50K in fines against the lawyers involved, and ordered them to pay fees and costs totaling $16,274.23 to Dolan himself. There are upwards of twenty more plaintiffs in this case, and 17 of them, including Hillary Clinton, filed their own motion for sanctions last week. So, unless the Eleventh Circuit jumps in to save their bacon, this is going to wind up being a very expensive mistake for Trump and his lawyers.

As it should be.