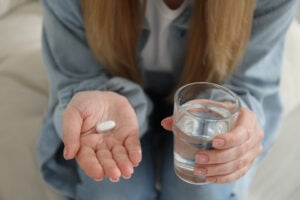 Well, this is an awful story from Texas about a woman’s right to make her own decisions about her reproductive health, but it’s probably not the terrible tale you’re envisioning.

Texas lawyer Mason Herring, a personal injury attorney and graduate of South Texas College of Law, was charged with assaulting a pregnant woman. He’s accused of dosing his wife’s drinks with an abortion drug — according to an affidavit in the case, he said her pregnancy “would ruin his plans and make him look like a jerk.” The couple was separated when they learned of her pregnancy, they already had two other children together, but reconciled and planned to spend their children’s spring break together.

On March 17th, Herring fixed his wife breakfast with a cup of water. According to court documents, after she drank the water she noticed it was cloudy, something Herring chalked up to dirty pipes and/or a glass. Later that day, his wife experienced severe bleeding and she went to the emergency room. She was released from the hospital later that night.

Over the next week, Herring allegedly tried to give her four beverages but she says she noticed a foreign substance or broken seal on them and did not have the drinks. But as reported by the Washington Post, about a month later, Herring resumed plying her with suspicious beverages:

About a month later, on April 20, Herring’s wife invited two people to her house as “witnesses” to her husband’s anticipated visit, the affidavit states. Herring arrived that morning to take their children to school, and even though she had two beverages in front of her, he allegedly tried to give her another. The wife told police she and her two confidantes all saw “an unknown substance” floating inside.

The next day, Herring brought another drink, this time one from a Sonic fast-food restaurant, according to the affidavit. Again, his wife told investigators, she noticed an unknown substance. Again, she didn’t drink it.

On April 24, the wife watched surveillance camera footage, noticing that Herring had cleaned out his truck and taken the trash to the curb, something she described as out of character, the affidavit states. After he left, she inspected the trash and discovered open packs of “Cyrux,” police said. She learned it was a Mexican version of the American-made Cytotec, whose main ingredient is misoprostol, which she knew could be used to induce abortions, according to the affidavit.

On April 26, Herring allegedly returned. While there, his wife saw him making a beverage in the kitchen, the affidavit states. She watched as he pulled a plastic baggie out of his pocket, emptied its contents into a liquid and eventually served the drink in her bedroom, according to the affidavit.

The wife reported the incidents to police, and provided photos of the suspicious drinks as well as samples of the beverages. According to prosecutors, at least two of the provided drinks tested positive for misoprostol.

Herring’s lawyers said they’re “very much look forward to our day in court and are thoroughly convinced that we will prevail in a Court of law when our time comes to defend these allegations.”