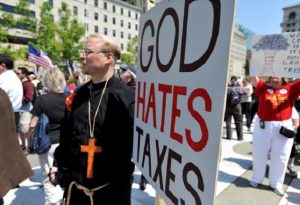 Actually, Jesus said “Render unto Caesar the things that are Caesar’s.” But it’s a good picture. (Photo credit should read Alex Ogle/AFP/Getty Images)

In the Dobbs decision, the Supreme Court did a generous job of signposting other areas that would be ripe for civil rights rollbacks now that the hard won religious right majority is settled — Obergefell being one of them.

The latest development in legally targeting queer well-being isn’t aimed at marriage however. The sights are on healthcare. And the lawyer behind the lawsuit has already made quite the name for himself.

Jonathan Mitchell, the Republican former solicitor general of Texas known for his efforts to restrict abortion access in the state, argues the mandatory PrEP coverage forces Christians to subsidize “homosexual behavior” in violation of the Religious Freedom Restoration Act, a statute cited in other health care fights over abortion, contraception and treatments for transgender people.

His clients — Christian-owned Kelley Orthodontics and Braidwood Management Inc., as well as several individuals who also object on religious grounds — believe the mandate makes them complicit in “conduct that is contrary to their sincere religious beliefs,” Mitchell said at a hearing Tuesday. “A complicity-based objection has to be accepted by the courts,” Mitchell told US District Judge Reed O’Connor in Fort Worth. “No one is questioning the sincerity of our clients.”

Why is it that the mainstream Christian objections to government spending are usually Westboro lite? Where’s the lawsuit objecting to paying taxes on the basis that the money goes to bankrolling the war machine? Of each dollar we pay in taxes, about $0.25 goes to the military, after all. Is murder lower on the list of things that need to be addressed than healthcare?

If it were up to Mitchell, blocking access to PrEP wouldn’t even make it to trial:

Mitchell seeks to block the entire preventive services mandate under the ACA without a trial, arguing it’s invalid because the government employees who manage the list have too much power to not be confirmed by the Senate. That would have a far-reaching impact nationwide, putting at risk requirements for no-cost access to other services, like care for pregnant women and infants. But his motion for summary judgment takes specific aim at PrEP.

There really should be a clear threshold for religious objections to healthcare. While I do not doubt that the litigants have “sincere religious beliefs” against funding the availability of PrEP, where is the line? Will overweight workers who rely on their job’s healthcare to subsidize their high blood pressure medication face a religious objection because their employers do not want to be complicit in enabling the “gluttonous” lifestyle their blood pressure medicine enables? As easy as it is to look at this issue and think “Well, I don’t use PrEP so this doesn’t impact me,” the worry lies in the realization that we’re all sinners in the eyes of God.

Your health may very well be next on the chopping block.

Latest Report Shows Cryptojacking Increased By 30% During The Crypto Slump