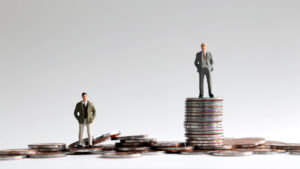 We here at Above the Law cover the vagaries of attorney salaries with a near religious fervor. So, we hear it all. When firms raise salaries, some associate will complain that it’s not enough money or that the conditions placed on the money are too onerous. Every raise seems to be followed by in-house counsel kvetching about how this will impact billing rates. Midsize firms worry about the economics of matching the raises and if they’re being priced out of the market for top talent. Law school admins wonder how much the sexy new salary will bump applications. And, none of these responses are really wrong — it’s just a matter of perspective. However it’s the associates, generally labeled as greedy, that tend to get the short end of the perception stick.

But now there’s news that associates were right all along.

That’s because according to a new study in the upcoming edition of the Journal of Economics and Finance, the median “real income” of lawyers in this country actually dropped 2 percent from 2001 to 2020. Thanks to inflation (and that’s the normal 2020 inflation, not the boogeyman of 2022 inflation), the median salaries went from $129,389 to $126,930.

And it’s not a case where, oh, everyone’s just been screwed over that period of time. Nope, as reported by Reuters, lawyers wound up uniquely worse:

By contrast, the real income of all U.S. workers — which refers to an individual’s purchasing power — increased nearly 4% during that period. Median real income among family physicians grew 20%, while economists saw their median income grow nearly 11%, the study found.

Authors James Koch and Barbara Blake Gonzalez lay the blame on an oversupply of lawyers and declining demand for lawyer’s services.

“The decline in payments to lawyers for their services that has occurred over the past 15 years has been substantial and by itself can account for a substantial portion of the decline in lawyers’ real median incomes,” it said.

….
As demand for legal services has fallen, the number of lawyers per every 1,000 workers in the U.S. rose from 4.15 in 2001 to 4.4 in 2019, the researchers found. They noted law is slow to react to labor market changes in part because it can take four years or more between a person deciding to pursue law and when they can join the bar.

Overall, legal services was 0.58% of U.S. gross domestic product in 2001 and only 0.28% as of 2019. A disturbing trend with potentially monumental impacts on the industry as a whole.