Liberal Justices Take The Reins In First Week Of Arguments 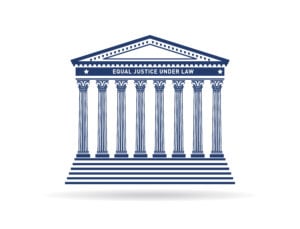 The first argument of 2022 in Sackett v. EPA also marked Justice Ketanji Brown Jackson’s first argument as a newly appointed justice.  After several of her peers on the Court completed introductory questions, Justice Jackson chimed in by piggybacking on top of the previous question asked by Justice Kagan. Justice Jackson began by asking about Congress’ intention with the Clean Water Act:

“…isn’t the issue what Congress would have intended with respect to adjacency and there was a regulation that defined adjacency to include neighboring? And as far as I know, Congress used the term ‘adjacency’ and didn’t adjust it to try to make clear the touching requirement that you say was intended by the term.”

After the attorney Mr. Schiff conceded this point, Justice Jackson followed up with:

“Well, let me — let me — let me try to bring some enlightenment to it by asking it this way. You say the question is which wetlands are covered, which I agree with, but I guess my question is, why would Congress draw the coverage line between abutting wetlands and neighboring wetlands when the objective of the statute is to ensure the chemical, physical, and biological integrity of the nation’s waters?”

Justice Thomas actually began the questioning at oral argument as has typically been the case since last term. Justice Thomas began by helping Damien Schiff set the groundwork for the initial argument by engaging in the following back and forth:

“JUSTICE THOMAS: Mr. Schiff, can — can intrastate, purely intrastate, navigable bodies of water be waters of the United States?

JUSTICE THOMAS: And how is that, if it’s purely intrastate?

SCHIFF: If — as a statutory matter, if that intrastate navigable water connects with some form of interstate transportation such that there could be a continuous channel of interstate commerce, then that water could be regulated.”

While Justice Thomas began laying the foundation for questioning Mr. Schiff, the three justices on the left of the Court were all more involved in the arguments for the petitioner’s side than Justice Thomas was in terms of words spoken.

Perhaps more importantly, all three liberal justices were much more engaged during the petitioner’s turn than they were during the respondent’s argument. More engagement during one side’s argument is often (but not always) a sign that the justices will vote against that side.

Since some of the more conservative justices spoke more during Brian Fletcher’s argument for the respondent, we may get a split decision for the first argument of the term.

The first figure tracks the words spoken during the entire span of oral arguments in Sackett. 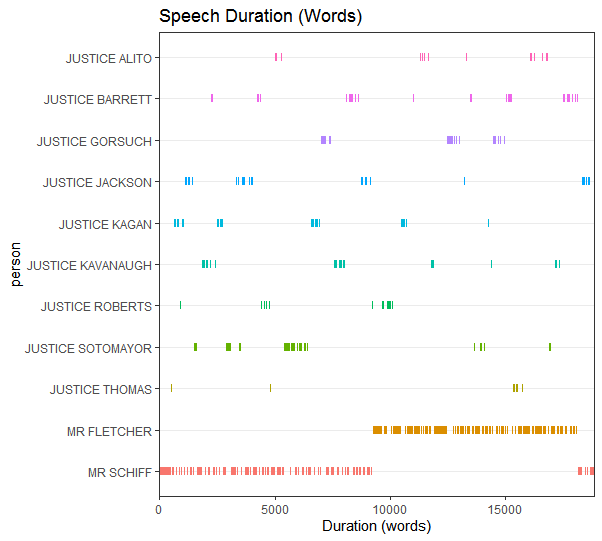 The most active speakers on the Court during arguments in Sackett were as follows: 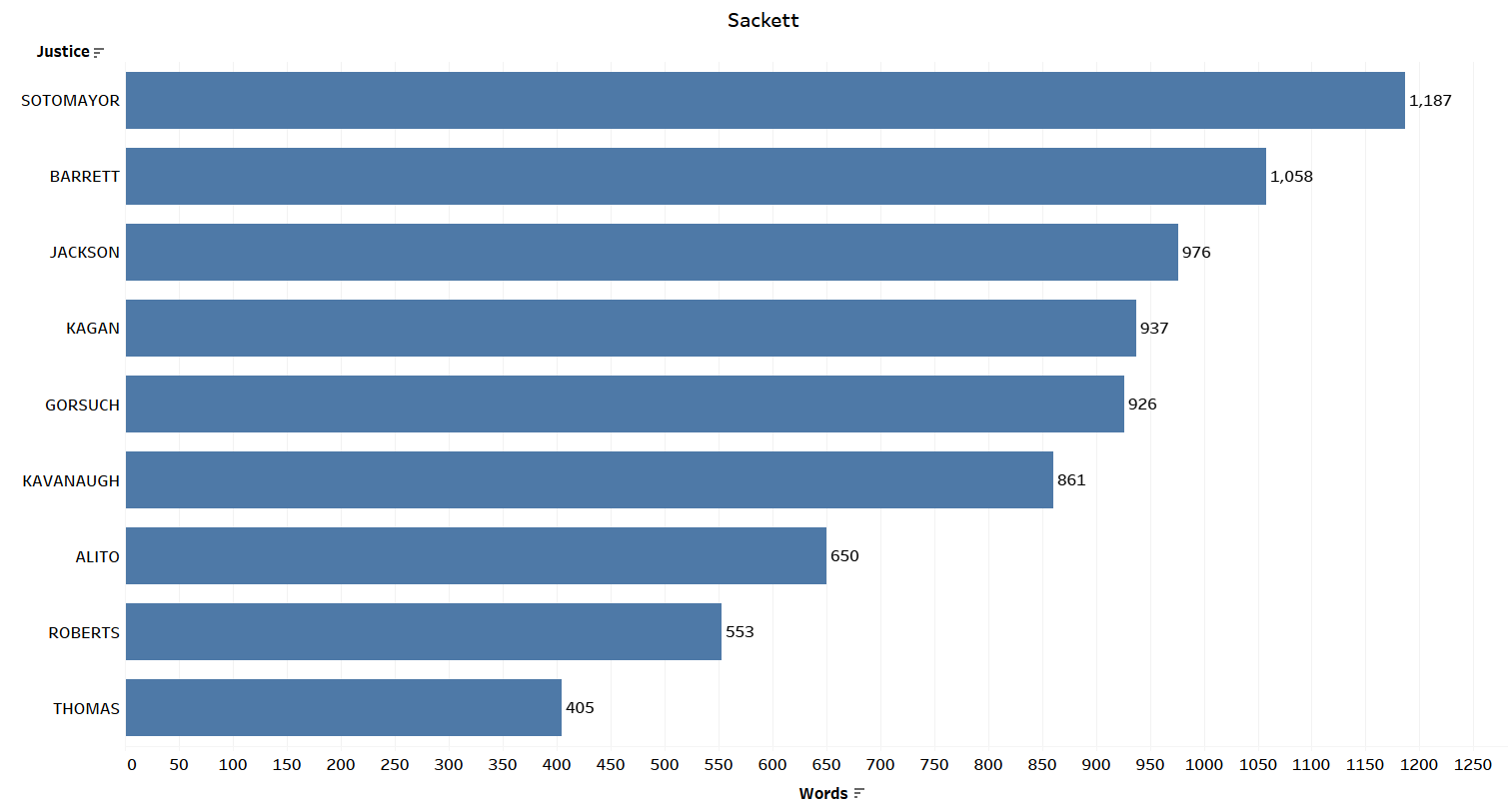 While the three more liberal justices spoke more during the petitioner’s argument, Justice Barrett spoke about evenly to both the petitioner and the respondent’s attorney.

Moving on to the rest of the week, Justice Jackson had the most words in an argument in the Merrill case with 2,269 words. It is very rare for a justice to speak over 2,000 words in an argument, even if there is extra time given for that argument. The next most active speaking justice in Merrill was Justice Kagan at 1,436 words. 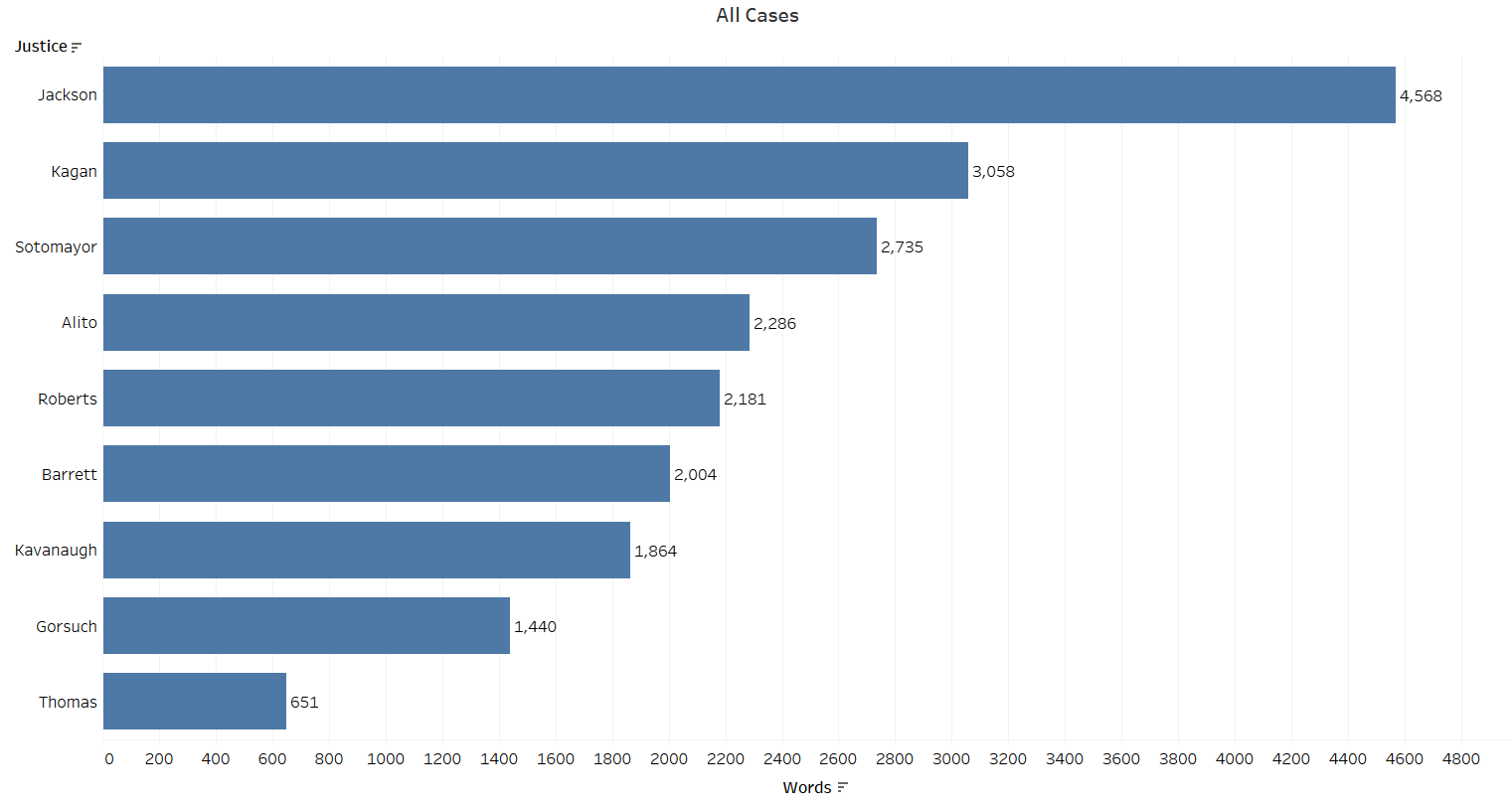 Last term’s first argument was in Mississippi v. Tennessee. There was less engagement from the justices on the whole in that argument than in Sackett. In Sackett two justices, Justices Sotomayor and Barrett, each spoke over 1,000 words. No justice spoke over 1,000 words in last term’s first argument. The justice that spoke the most during that argument was Chief Justice Roberts with 920 words and the second most came from Justice Gorsuch with 736 words.

The justices were even less talkative during the second oral argument last term which was Wooden v. United States. There, Justice Alito spoke the most with 751 words followed by Justice Kagan with 717 words.

Going back over the speaking statistics for the two justices appointed prior to Justice Jackson — Justices Barrett and Gorsuch — Justice Jackson appears to be much more talkative out of the gates. 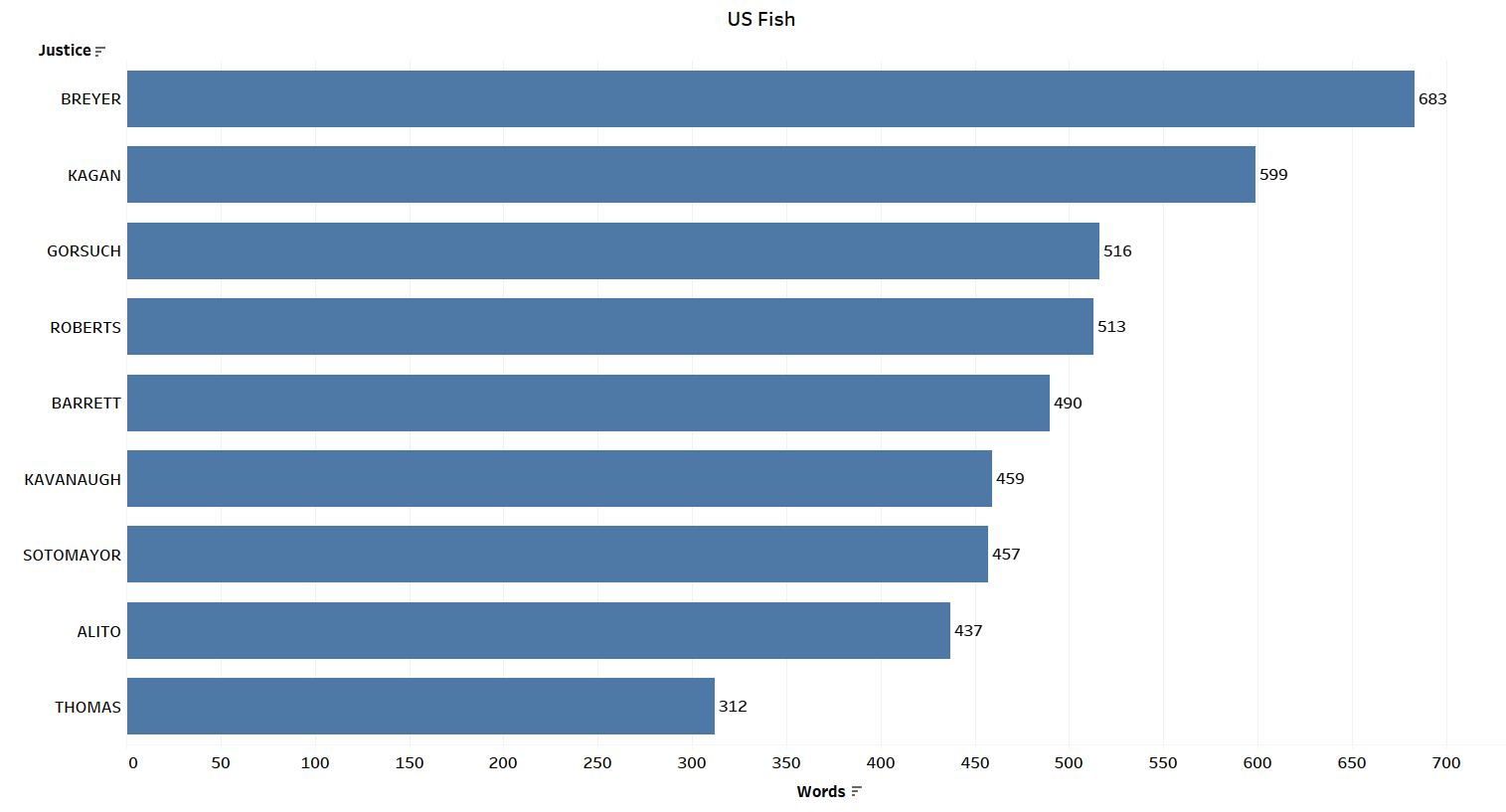 Per the statistics the justices appeared generally less engaged in these arguments than they did in Sackett. That said, Justice Breyer was far ahead of the pack in the US Fish arguments followed by Justice Kagan. Justice Gorsuch who spoke the third most during those arguments spoke over 150 fewer words than Justice Breyer.

The justices still did not speak as much in Stokeling as they did in Sackett. Even so, Kavanaugh was the fifth most talkative justice during those arguments. In Stokeling, the justices word counts were as follows: 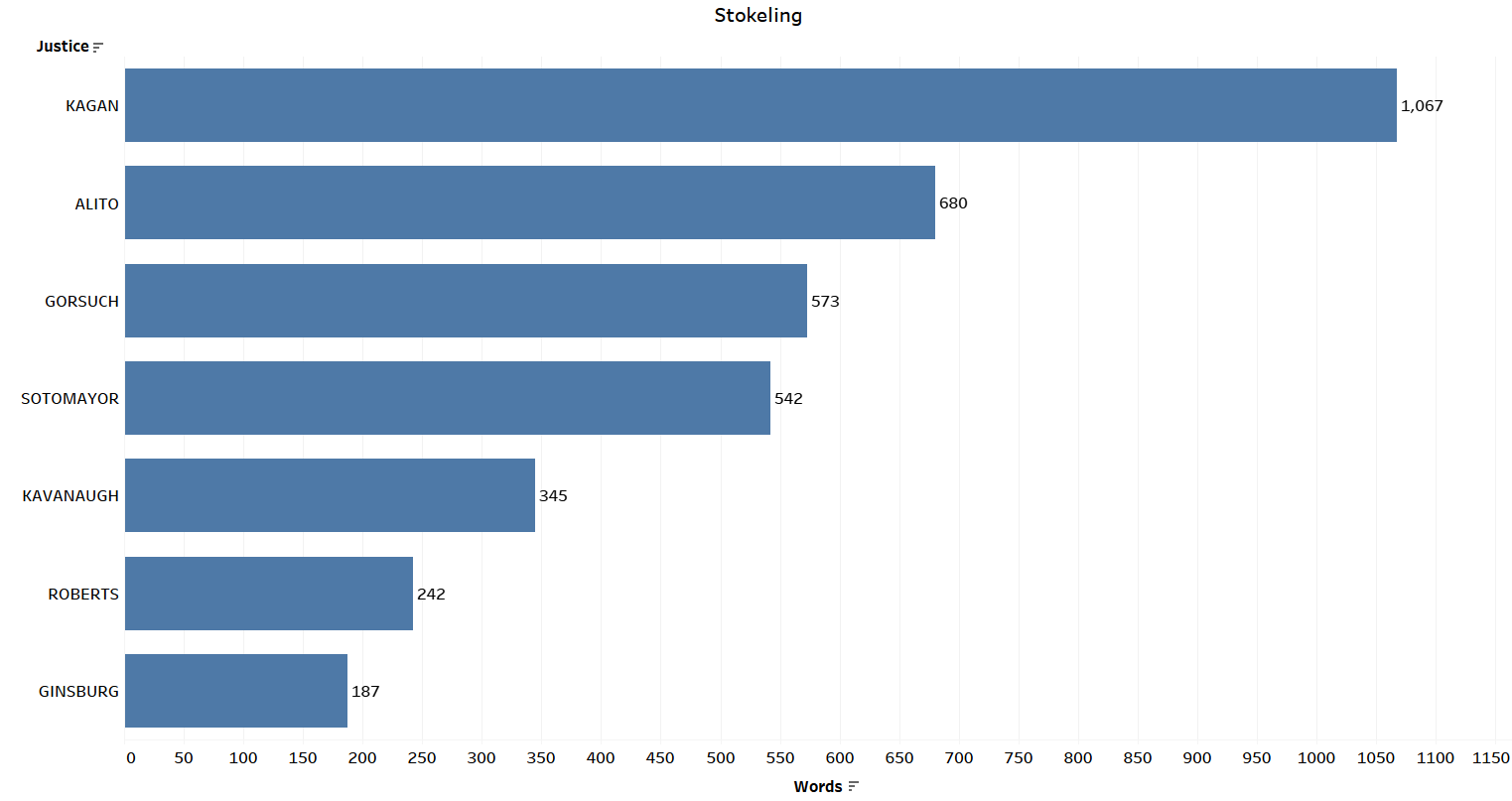 Kavanaugh only said 345 words during those arguments. This was fewer than Justices Barrett and Jackson in their first oral arguments. All other justices speaking statistics in Stokeling were dwarfed by Justice Kagan’s 1,067 words.  Justice Alito was the second most active justice in the Stokeling arguments with 680 words.

Will Justice Jackson continue with her active participation during oral arguments? Will the female justices continue to ask questions as frequently – especially the liberal justices? Will the speaking statistics correlate with the justices’ votes on the merits? We are only four oral arguments into the 2022 Term and there are lots of questions like these that will take weeks or months to answer.

This Data Shows Ethereum Whales Are Manipulating ETH Prices, Is That True?