Live Nation Just Called Off A Huge Concert With Big Names In Atlanta. Why? It’s Guns. Totally Because Of Guns. 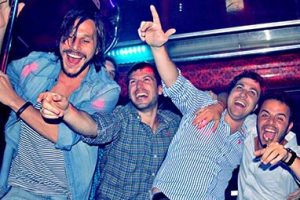 It could have looked like this, but it won’t now.

For many, summer is the best season. No snow or black ice to ruin your commute; leaves stay on the trees instead of blocking your sidewalk; you can’t bear to admit that fall is actually the better season but you fixate on the summer because it reminds you of the long breaks from schools you got to have decades ago. Summer, especially in Atlanta, is also known for its concerts. Unfortunately, the heat concert venues are afraid of is not temperature related — it’s a constitutional matter.

Tens of thousands of Music Midtown festivalgoers are no longer going to descend on Atlanta’s massive Piedmont Park next month to cheer on hip-hop star Future or watch beloved rock band My Chemical Romance take the stage.

In fact, some people are convinced Atlanta — center of the nation’s hip-hop music scene — will lose more music festivals and performances on public land as organizers and artists learn that state law makes it nearly impossible for them to stop people from carrying guns among the alcohol-fueled crowds.

Live Nation has refused to say why it recently called off September’s Music Midtown, a longtime fixture for pop music lovers.

It’s understandable really — live performances are dangerous enough for performers if you allow water bottles in the stadium.

The last thing you need is for one of Future’s Savages to shoot him or someone in the crowd as he performs Lil One. It would be the last straw in proving that Nostradamus was actually one of the ghostwriters for The Boondocks.

Do you think anyone facing any sort of liability would want to risk something like that happening when they would be the one’s liable? Hardly. And while there has not been an explicit announcement that lax gun laws are the reason for the concert’s cancellation, it is hard to explain why else a huge concert in “the cultural capital of the South” would go belly up. The outcome of a mass shooting just five years ago foretells the consequences of what could happen if a drunken argument during a My Chemical Romance set went postal.

A mass shooting at a country music festival in Las Vegas in 2017 that claimed more than 50 lives cost MGM Resorts International — the owner of the concert venue — and its insurers $800 million in legal claims. With no restriction on guns, Live Nation was looking at potentially “astronomical” liability exposure at Music Midtown, Lytton said.

Talk about going to The Black Parade. And while you’d think that most people would go to a concert for, you know, rest and relaxation, the more fear-riddled among us see danger and the need to protect even during moments of leisure.

“If I’m going somewhere in a big crowd, I want to be able to carry my firearm,” said Jerry Henry, executive director of Georgia Second Amendment. “I will assure you there will be criminals out there.”

I also think someone bringing an AR-15 to a music festival is a red flag. My first and only thought would be It’s Not a Fashion Statement, It’s a Deathwish — I’d be asking for a refund and a Zoom link to the Encore in a heartbeat. No one wants to party at a venue that could turn Gangland if a sneaker gets stepped on or a mosh pit gets a little too rowdy. With a crowd the size that big venues like Piedmont Park brings, they would be at least 100 Shooters sitting outside. Call me a coward, but I’ll be the first to admit that Teenagers (scare the living shit out of me). Can we get some common sense gun control already?