Mailbag: If Jalen Hurts is the answer at QB, what are the Eagles’ biggest 2023 draft needs?

In our Eagles chat on Wednesday, there were a lot of questions that we could not get to in time or other questions we did answer but could use more color. And so, let’s do a mailbag post to answer some of the overflow, as well as some commonly asked questions on Twitter and via email.

Question from TheAngelOfCorvo: What positions do the Eagles draft next year if Jalen Hurts continues to improve? Maybe Will Anderson?

1) Edge rusher: Edge rusher is the Eagles’ biggest long-term need, in my opinion, and it just so happens that the early indications are that it should be a very strong edge rusher draft. In terms of players that the Eagles can count on long-term, they have Josh Sweat, and not much else. Obviously, it is a very important position, and one the Eagles are more than willing to spend premium draft resources on.

2) Cornerback: My sense is that James Bradberry is a one-year solution, and he’ll probably hit the free agent market next offseason. It’s probably also worth noting that Darius Slay turns 32 in January, even if he’s still playing at a high level. And again, it also looks like a strong cornerback draft.

3) Running back / Defensive Tackle / Safety: These three positions are dependent on whether or not the Eagles come to long-term agreements with guys like Miles Sanders, Javon Hargrave, and Chauncey Gardner-Johnson.

Question from Cheesesteak: The Eagles’ average starting field position so far has been abysmal, but the offense has had some 80+ yard scoring drives AND also overcome a large number of penalties to keep those drives alive. The average drive length across all drives so far this year has been 44 yards, which seems kind of high. I guess what I’m saying is the offense (scoring) so far hasn’t been fluky or lucky which should be more sustainable all year.

The Eagles’ offensive “per drive” stats are indeed very good.

Meanwhile, their average offensive starting field position is the 22 yard line, which is second-worst in the NFL, behind only Seattle.

The Eagles are tied for the fourth-most points in the NFL, so, yes, it’s impressive that they have scored as much as they have despite their poor field position.

Question from Tony Weiss: Given the Eagles’ failure (so far) to field an effective kick returner, do you think Devon Allen could be a viable option to try? We know he’s raw, but does that matter as much for KR? The man has speed and explosiveness, and fielding kicks is lower stress than fielding punts. I guess there’s a specific talent to finding and hitting the hole, following blocks, etc., and he’s not necessarily a big powerful guy like, Cordarrelle Patterson, but — am I missing something, or does he, at the very least, present possibilities?

Opposing kick return units are hitting popups that land anywhere from the 10 to the goal line and they’re making the Eagles return kicks because they don’t respect Quez Watkins in that role. I think that the the next guy in line to get a shot will be Britain Covey, if they make a change, because he is already on the active gameday roster anyway (or at least he was the first two weeks of the season). If they were to bring up Devon Allen, that’s an extra gameday roster spot that gets occupied, and I don’t think they have room for that. Allen did return kicks in college, and he did get reps there in training camp.

Question from LostInChiTown: Jonathan Gannon seemed to actually UP the aggression as the game went on, despite the lead, which was great to see. Too often it feels like teams sit on a lead to protect it instead of increasing it. That said, what was up with the second half offense? Was it play calling, execution, or just a few bad 3rd downs interspersed?

I covered this in my snap counts post this week, but those don’t get a lot of traffic, so I’ll re-post here. The Eagles’ second half drives:

Question from Cesar: If the Eagles’ offense continues to perform at this level, down the road, who would be more deserving of head coaching consideration, Shane Steichen, or Gannon?

Steichen has had a couple outstanding games from a play calling perspective. I don’t know what kind of aspirations he has to be a head coach, or how well he can manage the personalities of 53 players, but if the Eagles’ offense keeps humming the way it is, he’s going to get some attention. Ditto that for quarterbacks coach Brian Johnson.

Question from Alcoholics Alshonymous: If the Eagles are legit, they’d be buyers at the trade deadline. Any way-too-early trade targets in mind? If that’s too far in advance to think about, any position groups to target? I feel like any addition (barring an injury somewhere) would be a luxury addition.

In addition to the long-term need at edge rusher as noted above, I believe the Eagles could also use reinforcements in 2022. Some veteran names that make sense from bad teams that could be looking for added draft capital are Robert Quinn (Bears) and Denico Autry (Titans). And then if they wanted to get really spicy, a trade for Brian Burns (would likely require a 1) would make sense as a short-term and long-term play.

Question from Red: Why wait until the deadline to make a trade as opposed to just doing it now?

Because other teams around the league haven’t yet concluded that their seasons are over and that they should be sellers.

Question from JSizzle: Jimmy, when will the Eagles suffer their first loss this season?

Their next eight games look extremely winnable on paper. Here they are, with their DVOA rankings via Football Outsiders:

I did not expect to see the Jaguars as the No. 2 team in DVOA, but whatever. The point here is that the Eagles play a lot of either mediocre or outright bad teams over their next eight games before they face the Packers Week 12.

If I were to guess what their record will be after these next eight games, I’d venture a guess of 8-2, but it’s really hard to pick which of those teams will beat them.

Question from Pragmatic: 2-0 is 2-0, but the Giants still really suck. They may just have a coach who doesn’t overthink the end of games which is worth more wins than it should in a multi-billion dollar league. If they win 9 or 10 games I am fine with it! Dallas still looks more talented… and probably Washington?

Yes, I agree with the sentiment that the Giants are least talented team in the division. And yes, if they win 9 or 10 games, that’s good for the Eagles on two fronts:

Giants fans would kill for 9 or 10 wins by the way, if that’s how it plays out. I mean, they’ve lost double-digit games in each of their last five seasons, so actually seeing more wins than losses would be welcomed. But it wouldn’t be great for building a winner, long-term, in my opinion.

Question from Bull: Are the Cowboys going to be delusional or admit failure and start to rebuild?

They have a good defense and they can’t move on from Dak Prescott even if they wanted to, so there’s no rebuild coming in Dallas.

Question from Mike Bartram’s nephew: Hey Jim, Week 1 the Bengals had long snapper issues. If Lovato gets hurt, who is the Eagles’ designated back up LS? My uncle still has it and is available!

I’ll take that question even further.

One of the other reporters recently asked Sirianni who the emergency quarterback is (should Hurts and Minshew both get hurt in a game), and even though it was during an “off the record” session, he wouldn’t say. My guess on that is that it’s A.J. Brown. In writing a player review of Brown this offseason, I noted that he threw two passes last season for the Titans and appeared to have a pretty good arm. He also sort of runs like a running back, so he would make sense.

As for the specialists, I don’t know how heavily guarded that information is. I’ll ask the specialists themselves who each of their backups are the next time I’m in the locker room.

Question from Mike in Colorado: Really important question. Are you going to the dump in Washington (Maryland actually) for the game or staying home again and watching it on TV? And over/under for Eagles fans falling out of the stands?

Because of COVID spikes late last season, postgame press conferences were virtual only for that game. Plus, the view from the press box at Fed Ex is absolutely atrocious. For example, a past vantage point of mine: 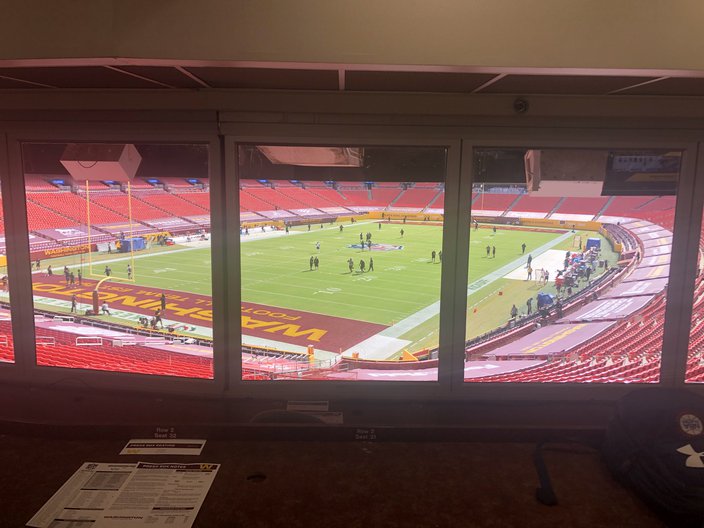 So I skipped it last year. We’ll have locker room access this year, so yeah, I’ll be back there again, in what is probably the smallest visiting locker room in the NFL. Hooray?

I’m curious what the Eagles fan turnout will be this season. It’s not like it’s Week 15 and their season is already over. That’s when those games are basically Eagles home games, but I do think there will be a lot of green there, as always.

Steve Smith Sr. might be the highlight of Thursday Night Football broadcasters

How to see Jupiter: The planet will make its closest approach to Earth in 59 years on Monday night

Eagles over/unders: How many fans will take over FedEx Field?