Mandatory Retirement Policies: A Source Of Vulnerability And Opportunity 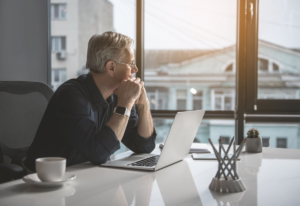 King & Spalding scored two notable coups this year when it lured prominent litigators Randy Mastro and Mark Kirsch away from Gibson Dunn. The loss of Mastro in particular was a serious hit for Gibson: in more than two decades at the firm, Mastro had accumulated a multitude of lucrative and high-profile clients, ranging from Chevron to Chris Christie.

Mastro and Kirsch undoubtedly weighed many factors in deciding to move. Lately, there have been rumblings in the market about office politics involving leadership in Gibson’s litigation group, so it’s possible that played a role. The rising fortunes of King & Spalding presumably helped: thanks to 25% growth in profits per equity partner from 2020 to 2021, King & Spalding is now within $70,000 of Gibson’s PPEP figure. (Over the same period, Gibson grew PPEP by just 8%.)

But regardless of the exact motivations, the defections of Mastro and Kirsch cast a spotlight on an important difference between the two firms: whereas Gibson requires partners to step down from its executive committee at 65 and to give up equity status at 68, King & Spalding has no mandatory partner retirement age. Mastro and Kirsch left Gibson at ages 65 and 60, respectively. Mastro, a longtime member of the executive committee, was already confronting the effects of Gibson’s retirement policy, and Kirsch could have been vulnerable to forced retirement in the coming years.

Roughly half of Am Law 200 firms have mandatory retirement, with most specifying ages in the range of 63 to 68. Protocols for handling the retirement process vary. Some firms will transition partners into counsel positions as an intermediate step, enabling them to continue practicing while transferring their clients and work to younger partner colleagues. Others broach the topic of the impending retirement a year or two in advance to ease the partner’s transition out of the firm. It must be noted that retirement policies are often applied selectively, even at firms that supposedly have an age threshold. For example, there appear to be at least 23 Gibson Dunn partners who are over the age of 68, notwithstanding the firm’s mandatory retirement rules.

Traditionally, mandatory retirement has played an important role in career development for mid-career partners. When senior partners depart, it opens leadership positions for the next generation and enables younger partners to inherit primary responsibility for lucrative clients. However, an important premise of this model was that senior partners would, at least grudgingly, agree to transfer their clients. In a world of substantially increased partner lateral movement, this is no longer a safe assumption. As Mastro and Kirsch illustrate, partners over 60 with a robust book of business have attractive alternative options, and they need not acquiesce to a retirement plan that doesn’t suit them.

The other important function that mandatory retirement historically played was to help firms cull partners whose declining productivity no longer merited their high compensation. Stepping down due to age enabled a more graceful departure than being pushed out explicitly in response to diminished revenue production. But in the current environment, with the decline of lockstep partner compensation and an accelerating shift towards a pay-for-performance model, firms are not waiting until age 65 to push out unproductive partners. As a result, partners who still have equity in their mid-60s are much more likely to be important revenue contributors than in the past.

So if you are a partner of a certain vintage confronting impending mandatory retirement and are not yet ready to step aside, where else might you consider? Naturally, this will depend on a number of factors specific to your practice and your book of business. But as an initial screen, it may be helpful to highlight firms that — purely by the numbers — have demonstrated a particular willingness to retain partners beyond the age of 65.

To that end, we analyzed the number of partners at each Am Law 200 firm who received their JD in 1981 or earlier. The logic for selecting 1981 is that, assuming each attorney was at least 25 years old in the year of JD graduation, all partners in this data set should now be older than 65. For each firm, we divided the partners in this set by the total number of partners, thereby estimating the proportion of the firm’s partnership comprising members age 65+. Firms with a higher proportion of these seniormost partners may be especially receptive to considering potential lateral partners who are approaching mandatory retirement at their current firm.

A frequent complicating factor in considering the viability of late-stage lateral moves is the potential loss of a pension. Partners may understandably view their pension as a set of golden handcuffs: having spent so many years accumulating pension credits, does it make sense to walk away now?

In some cases, the answer will indeed be no. But it’s important to recognize that the pension issue is surmountable, at least sometimes. Gibson Dunn is known for its generous pension package, but Mastro and Kirsch departed regardless. For a partner with a strong book of business, there is a good chance a competing firm will be prepared to offer a package that adequately compensates for loss of an accumulated pension.

Naturally, this is an area where consideration of individual circumstances is critical. At Lateral Link, we maintain an extensive proprietary knowledge base of firms’ mandatory retirement policies to assist our senior lateral candidates in targeting the most suitable destinations. If you feel you would benefit from an outside perspective on potential opportunities tailored to your specific situation, we welcome you to get in touch for a detailed discussion of your current firm’s policy and how it compares to the alternatives available in the broader market.

Uniswap Price Breaks Past The $7 Mark After Forming This Pattern