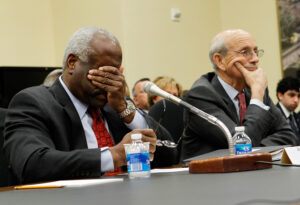 WASHINGTON – APRIL 15: US Supreme Court Justices Clarence Thomas (left) and Stephen Breyer testify during a hearing before the Financial Services and General Government Subcommittee of the House Appropriations Committee on Capitol Hill, Washington DC, April 15, 2010. The hearing was to examine the FY2011 budget request for the Supreme Court. (Photo by Alex Wong/Getty Images)

* What?! Ginni Thomas’ husband may be involved in the whole undermining democracy thing? Who’d have thunk it?! [MSNBC]

* Looks like models that require profit aren’t the only thing preventing recycling from catching on. [Cal Matters]

* Here’s what you should know about NYC’s pay transparency law. [Fortune]

Time To Buy SushiSwap (SUSHI)? Here Are The Levels To Watch