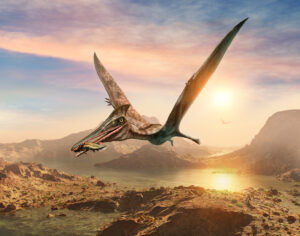 To paraphrase a common refrain from astrophysicist Neil deGrasse Tyson, the dinosaurs’ big problem was that they didn’t have a space program.

With the exception of those of us who are misguided religious fundamentalists, we all know that an enormous asteroid impact some 66 million years ago caused dinosaurs to go extinct. A select few species made it through the catastrophe to evolve into birds. But it was a massive extinction event: about half of all plants and animals disappeared from the Earth.

Considering that the dinosaurs made it through well over 150 million years before a big space rock put an end to them, asteroid impacts can certainly seem like a distant concern to Earth’s modern inhabitants. Yet, over the course of our planet’s long history, there have been a lot of big asteroid impacts — and there will surely be more if we fail to do anything about it.

Scientists, using the way-better metric system to study asteroid impacts, found that a space rock five kilometers across (that’s a little over three miles across for Americans) can be expected to slam into Earth on average about every 31.25 million to 62.5 million years. A five-kilometer asteroid hitting anywhere on the Earth would be quite bad news for human beings.

The real planet killers are fortunately much rarer. Asteroids 10 kilometers or more across, like the one that killed the dinosaurs, only ram into the Earth, on average, every 250 million to 500 million years or so.

Remember, these are averages. If another dinosaur-eraser hit us tomorrow after only 66 million years, nature would simply be coming in a bit ahead of schedule. It might just compensate by waiting another billion years after that to pulverize the squid people or whoever ended up inhabiting Earth after us.

Until this week, nobody was really sure if there was anything at all we could do were we to spot a big asteroid careening toward Earth. Now, thanks to the U.S. space program, we know.

A few weeks ago, NASA hit a large asteroid with a refrigerator-sized space probe going 14,000 miles per hour. This asteroid, known as Dimorphos, was about the size of a football stadium (not a planet killer, but capable of taking out a city). Dimorphos was orbiting a much larger asteroid (neither asteroid posed a threat to Earth, this being a proof-of-concept test). The idea of this Double Asteroid Redirection Test, or DART for short, was to see if giving an asteroid a little “nudge” from a long way out using nothing but kinetic energy could be enough to redirect its path.

Since the overall effects of NASA’s DART mission were meant to be subtle, it was not possible to measure whether the test was successful at impact. Now, however, initial data is in, and it appears that DART was even more successful than scientists had dared to hope.

The DART probe exceeded expectations in altering the path of Dimorphos. This was the first time in history that human beings altered the path of a celestial body.

Space exploration has already netted us huge societal benefits. If you like camera phones, laptops, and GPS, along with numerous other things that we now all rely on every day, thank space exploration.

But all that pales in comparison to saving everyone and everything from utter destruction. Even setting aside the possibility of diverting an asteroid the size of the one that killed the dinosaurs, moving just one city-killer like Dimorphos out of the Earth’s path would more than justify the $330 million cost of the DART mission (not to mention whatever other useful technologies the mission will lead to that we can’t yet fathom).

It’s hard to overstate the importance of the DART mission’s success. And what an elegant solution: no nukes flying up atop a giant tube of rocket fuel to maybe explode in our atmosphere, no Bruce Willis type having to (spoiler!) sacrifice himself for the sake of humanity — just a little diligence, a lot of math, and getting your old Frigidaire up to 14,000 miles per hour.

Now all we have to do is avoid destroying ourselves in some other way while we wait for the next asteroid.

Why These Experts Believe The Ethereum Price Could Soar to $5K