The Philadelphia Navy Yard may see some major changes over the next two decades, as its owner unveiled another plan seeking to fulfill a major goal of an ongoing redevelopment project – to build a residential neighborhood at the former military base.

PIDC, an economic development nonprofit founded by the City of Philadelphia, has owned the Navy Yard since 2000. The agency has partnered with real estate investor Ensemble/Mosaic on the $6 billion plan, which would add 8.9 million square feet of residential, retail, science and multi-use development to the waterfront site.

Ensemble/Mosaic, which is investing more than $4 billion into the project, plans to build 3,900 apartment units and 235,000 square feet of retail space. Of the apartments, 15% will be offered at affordable rates and 25% of retail space will be subsidized for minority and women-owned businesses.

Chapel Block, which was unveiled by PIDC in 2021 as part of an update to its Navy Yard Master Plan, included more than 600 apartment units as the basis for the expansion of a new residential neighborhood at the edge of the city.

PIDC has put forward three redevelopment plans so far that have built off of the existing infrastructure of the Navy Yard with funding provided by partners every few years. The partnership between PIDC and Ensemble/Mosaic would be its largest investment to date.

The agency released its first plan in 2004, attempting to add corporate offices, hotels, mixed-use development on the waterfront and the potential for residential properties.

In the years between the implementation of the original redevelopment plan and an update in 2013, several businesses moved to the large public space, including an Urban Outfitters headquarters, TastyKake and several pharmaceutical companies.

“The Navy Yard has been an anchor and economic driver for Philadelphia for more than two centuries, serving in both times of war and peace,” Mayor Jim Kenney said on Tuesday. “Today, the progress it has made and will continue to make as outlined in this plan will help reinforce its role as a leading business and life sciences campus and unrivaled asset to the city.” 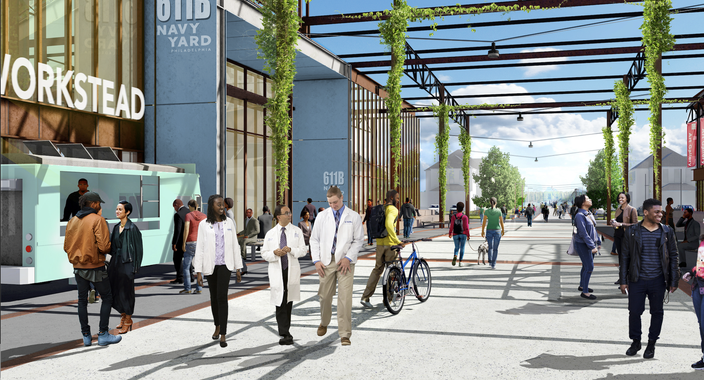 This is the third development plan offered by PIDC since it took ownership of the Navy Yard in 2004. This large-scale project would expand on its existing life sciences infrastructure and add more lab and office space.

The 2013 update grew from the initial plan, proposing larger-scale office development and more than 20 new buildings in each segment of the yard. The bulk of the plan included the addition of new corporate offices and an expansion of the Port of Philadelphia.

The addition of residential properties has been a major goal of the Master Plan since its unveiling nearly 20 years ago. Though zoning restrictions and other issues have made it difficult to implement, a September 2021 update brought PIDC closer to being able to lease out residential space and build the foundations of a community.

Much of the controversy surrounding the Master Plan’s housing proposals was based on Navy deed regulations that barred housing in parts of the public space. Those regulations had been in place since the Navy Yard entered city ownership, but were relaxed in 2019.

As a result, PIDC and its partners were able to support the creation of at least 1,000 to 1,500 apartment units in the area’s Historic Core district, which is where most of the apartment units have been proposed since 2013.

It remains unclear whether those regulations will allow for the almost 4,000 apartment units proposed by Ensemble/Mosaic, though PIDC noted in a developer document in 2019 that additional residential plans outside of the Historic Core would require special permission from the Navy.

Whether the 2022 plan is able to come to fruition is largely dependent on the partnerships formed between PIDC and its corporate and investing teams. Currently, the Navy Yard hosts 150 employers and 15,000 workers, and hopes to expand that with 12,000 jobs over the next two decades.

In the years since PIDC has controlled the Navy Yard, it has expanded its life sciences campus, with a focus on cell and gene therapies. The new plan would build out 4.3 million square feet of additional lab and office space for companies working to cure cancer and chronic diseases.

“Throughout its history, the Navy Yard has been at the leading edge of innovation and this transformative plan continues to break new ground,” said Kate McNamara, PIDC’s senior vice president of the Navy Yard. “We are incredibly excited to set a new standard for equitable development that balances inclusive business growth with sustainability, connectivity, beautiful public spaces, and quality jobs for all Philadelphians.”

A new 137,000 square foot science research facility will begin adding tenants in 2023, building off of the existing life science lab and research spaces that have been built on the property in recent years.

“Our focus the entire way through the plan development has been to remember that the Navy Yard is public land and its development should be about people,” said Kam Babaoff, chairman and co-founder of Ensemble Real Estate Investments. “Every one of the 109 acres we develop – whether for the first residential property in more than 70 years, or for thriving retail, life science, and corporate use – will increase accessibility and provide an environment that supports equity in all facets.”

Ensemble/Mosaic is set to build 3,900 apartment units and 235,000 square feet of retail space. 15% of the apartments will be leased at affordable rates, and 25% of retail space will be subsidized for minority and women-owned businesses.

Investments into expansive public transit were also hallmarks of the earlier plans and additional investments from Ensemble/Mosaic could bring them closer to reality. The project development includes several transportation consultants, as the Navy Yard expects to expand its public transit reach to make the residential and retail space more accessible to the rest of the city.

In addition to driving and parking expansion, there will be dedicated bike lanes, rapid bus lines, pedestrian-only streets and a new transit center connecting the Navy Yard to Broad Street.

The Navy Yard will utilize its own workforce training program – launched by PIDC and the West Philadelphia Skills Initiative in 2020 – to assist in growing the area and bringing quality-waged jobs to the new community.

That Woman Wasn’t Even In The Room When Rudy Asked For That Pardon He Never Asked For!