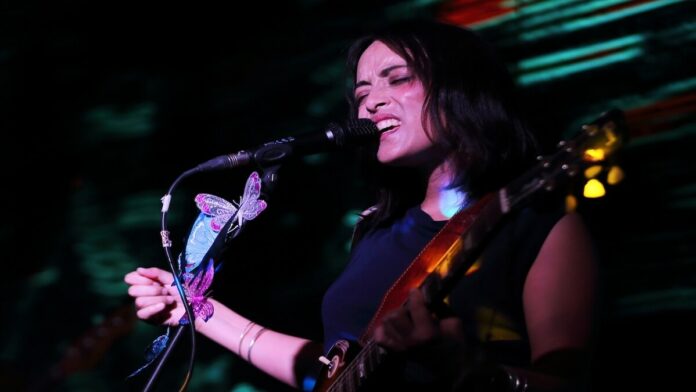 That from the poetic description of a land exalted in its stunningness as being the Abode of the Clouds emerges the as exalted identity of the Indian Queen of the Blues is but a following upon the trail of the tantalising that throws up options in a multitude of amazingness, in exact resonating of its very own emergence as some entity truly spectacular. And thus hails out of the capital city of this pristine abode of the cottony clouds that the world looks up to as Meghalaya in sheer awe of its beauty a voice as assertive in its striking of the right chords and in so much power as well that therefore has commanded reputation to be one of the finest in truly embodying the melodious medley of what defines the musical maverick called India.

Call it the enduring charm in all assertions artistic or the pursuit of something lesser explored in that context of both content and in time and the very dynamic recognition of Tipriti Kharbangar is enough to be instantly validated in regard of what she commands in terms of her exclusive identity as well as in enormous respect. With her calling prominently resting in the hallowed grounds of the genre of the blues, which initially did not reveal in as much popularity as it does today, Kharbangar found in the distinctiveness of her voice a rhythm that so effortlessly allowed her to scout out this particular play of the musical. Roughly two decades later and the undisputed Indian queen of the Blues finds herself being the co- bearer of a legacy that helped establish this strum in music as one today as readily taken to in the Indian range as it is elsewhere.

Of course like pretty much every expression in creativity attaining ultimate glory in breaking free from the entanglements of many a different constraints seeking to undermine its essence, Tipriti Kharbangar’s taking to music in such seriousness that had it occur to her as both passion and profession too found disapproval from her mother. This lack of support though had nothing to do with the ability of a young Tipriti to render those notes of power in as much impeccable display of talent and passion alike. Instead it had been once again that conventional belief in music, or rather creativity being something best reserved for leisure and not let to create their own niche in the actual mode of living that could have very well meant the nipping in the bud itself of an icon in the making.

The tale of Tipriti is one not surprisingly scripted along the trails of an existence that goes back to her childhood. For someone who started out singing gospels at the local church choir drawing upon the interest that she ‘inherited’ in having been born to a musically inclined family, Tipriti’s chosen path of musical journeying perhaps would not have spanned the way it did if not for her hometown of Shillong. Indeed through her years of growing up influenced by the character of this town that finds expression as being the rock capital of India, it should not be any bolt out of the blue that Kharbangar should come to harbour a certain penchant for the musical. But perhaps her shot to stardom and fame as being natural entailings of the excellence that she has constantly strived for in her musical pursuit might not have as surely accrued to her if not for her time at the Dr Graham’s Homes School in Kalimpong.

In her mere couple of years stint at the picturesque expanse and surrounds of what conjures up the tranquil identity of the school, Kharbangar got to explore her own range and dimensions as a singer, winning competitions and trophies with elan while being also a part of the school choir. That perhaps was the first segment in recognition that Tipriti experienced for herself to be even more engrossed in this expression of her own, something that she has been continuing ever since and has managed also to assert her prowess and presence so impressively in it coming to characterise the essence of her person.

The clarity and resonating dominance of her vocals is what undoubtedly accords Tipriti Kharbangar that definite identity of being the finest blues singer to have emerged out of the country. And playing through this ‘loudness’ of voice once perceived as undesirable so much so that saw her being ‘banished’ to the last line of singers in the church choirs is the trademark quality that this lady with an unmissable nonchalance weaved around her basks in the unmatched glory of in today’s times. Equally striking is her presence in as much power that strikes every time she takes to stage with her usual air of a certain calm that however gives way to manifesting instead as the storming assertiveness of a performance that she delivers every single time with so much perfection.

For all her embodiment of individuality though, whether that be in reference to her resounding vocal range in ensuring that she and the blues therefore does not go unheard or in her own charismatic style in hitting the notes and striking the chords with an intensity that would make even the most unbothered of ears perk up in response to her manifesting of musical magic, Tipriti Kharbangar assumes also equal prominence of identity as being the soul of the exclusively blues music band Soulmate ever since its inception in 2003.

In fact it is this organised collective of the blues that she along with Rudy Wallang has been fostering since the early years of the millennium that has led this genre of the art to witness such heights of its Indianised success in present popularity. Both have been winners of the Jack Daniels Music Award in 2009, the then very young girl taking the title of being the Best Female Vocalist while the more established Wallang bagging the distinction of being the Best Guitar Player. And while this intertwining of identity with a collective pursuit of music might seem to be a less than exact representation of the faculties and abilities that sum up the repertoire of Kharbangar specifically, it still is in this holistic approach of lauding her music that lies the most sublime kind of praise that this female icon as well in all her own might and right deserves to be celebrated through.

Her music in tandem with the expert exploits of Wallang is what defines the trailblazing phenomenon that the very mention of Soulmate emerges as. And so complementing of each other is this duo establishing indeed of the blues as a dominant genre of music across the lengths and breadths of a country supposedly not so entertaining of notions in that scape of the melodies that it is within these specific notations in singing where a dwelling upon the true identity of Tipriti as a musician assumes more substance. It also is because the very reference to the band name Soulmate is so evocative of the deeper essence of who Tipriti Kharbangar tends also to be as someone soulfully devoted to the practice and furthering of her art that makes any ‘discourse’ upon her person almost impossible to pursue.

This trait of the soulful that Tipriti essentially plays out through every single of her musical exploits again is something that is ingrained into her. Her birth and life in the serene space of Meghalaya- more specifically Shillong is what has shaped her musical journey no doubt but the extent of that influences goes much beyond this assertion of much physicality. For it is the quiet and calm and peace of her hometown that has sufficiently shaped up her sensibilities as well, so that any music she does, whether in singing or in songwriting, stems out naturally to be feeding directly into the intense depths of hearts. It also has been this place eulogised in its beauty as being the Scotland of the East that has turned out to be as beautiful a premise for the lady to find herself belonging to. For if it wouldn’t have been for the Soulmate identity to follow her after the destined brush with Rudy Wallang upon her return to Shillong, Tipriti Kharbangar perhaps would never have realised that she indeed ‘got in her the blues’ as her ultimate mentor would so appreciatively celebrate her for.

So intense is Tipriti’s pursuing of the blues in music that it occurs as emotion almost to her. And that perhaps has what has led her to forever make such songs that are original in and out, evoking the sounds of a place where she continues to be rooted in despite her more than adept mode of conduct in this Western style of the melodies. Her experience and versatility in the genre, acquired through years of practicing and ‘propagating’ this language of universal classification, as well as her general residing in an attitude that conveys ideas of her in all things no- nonsense and empowered and influential and daring might make this woman evolved enough today to be more than aware of the assurance that she has helped emphasise for many a woman out there following in her footsteps such that one might be inclined to think of her as perhaps a bit down herself in the other assertion of what the blues also allude to in the sobriety of them. But allow yourself the luxury of witnessing any of her always electric performances and the joy and exuberance and vivacity evidently playing through in her taking to the stage for doing something she wholeheartedly loves and enjoys and indulges herself in and one cannot but feel themselves swaying also to that rush of happiness waiting to take over the world in all that enormous energy of the Queen’s rendition of the blues.