Notre Dame football is seemingly the last of the independents, a status the Fighting Irish are not willing to give up unless they absolutely have to.

Pat Forde of Sports Illustrated reported “independence remains the preference and the leader in the clubhouse” when it comes to the Notre Dame football program. Although the Irish are ACC members in pretty much every other sport of note, again, it is so hard to give up that unbelievable NBC TV contract and have to share the revenue it generates with the other conference members.

Of course, it may no longer be feasible for Notre Dame to claim national independent status in an evolving college football landscape. Clearly, the Irish are the next big domino to fall after USC and UCLA have agreed to leave the Pac-12 for the Big Ten beginning in 2024. Academically and geographically, Notre Dame is a perfect fit for the Big Ten. The question is if will they see the light.

Not until Notre Dame decides what it wants to do will other programs of note make their moves.

The two biggest things that will impact Note Dame’s decision to give up its independent status are the collapse of the ACC and the College Football Playoff. The former is significant because a bulk of the Irish’s football schedule is against ACC foes. Plus, they play most of their other sports in that conference. As far as the playoff is concerned, we are only guaranteed four more postseasons…

With the dawn of college football mega conferences, one would think playoff expansion is simply inevitable at this point. The question is if Notre Dame would have a seat at the table in this new college football era. Scheduling non-conference games for the Big Ten and SEC could be incredibly challenging down the line, especially if they adopt an interconference competitive balance game.

Ultimately, Notre Dame will be an opportunist in this situation as it always had been. The Irish played an entire ACC schedule during the height of COVID. It would be incredibly bad karma to spurn the loose affiliation with the ACC to leave for the Big Ten only years after the fact. Of course, if the ACC collapses as the Pac-12 has, then it serves Notre Dame to grab a Big Ten life preserver.

Unless they absolutely have to, Notre Dame will hold onto its national independent status forever.

For more NCAA football news, analysis, opinion and unique coverage by FanSided, including Heisman Trophy and College Football Playoff rankings, be sure to bookmark these pages.

Ranking every Eagles defensive back ever 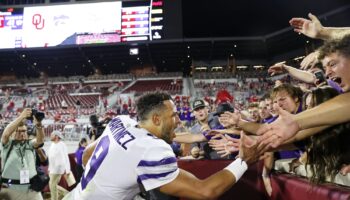 Ethereum Price Broke Out Of Descending Channel, What’s Next?