Jeff Rake knows that his upcoming swim across the Catalina Channel is a big undertaking.

The 56-year-old Wynnewood resident has been training for months ahead of his second attempt to cross the 20-mile channel, which separates Santa Catalina Island from the Southern California mainland, on Sept. 19. He’s done this while attempting to maintain balance among his professional life, family life and ongoing journey through sobriety and recovery.

With about four years of continuous sobriety under his belt, Rake has used swimming as a sort of catharsis, improving his health while working to achieve a goal that has been at the forefront of his mind for most of his adult life.

“You’re kind of trading one addiction for another,” Rake said. “You’re focusing a lot of energy and attention on a single activity. I went into this (training) knowing it was a major endeavor, and I didn’t want to sacrifice any other part of my life to achieve this personal goal. It can be all-consuming, but keeping that balance is something I strive for.”

Rake grew up in Southern California. He swam through his childhood and into high school, but he said he was a mediocre swimmer. An injury he sustained during his freshman year of college steered him away from joining a swim team, but he got back into the sport later in life.

That dream stayed with him through the rest of his 30s and 40s, even as the hospitality company that Rake was working for closed its offices in 2005, sending his alcoholism on a downward spiral for more than a decade. He lost his job shortly before the Great Recession, and his health took a major hit. 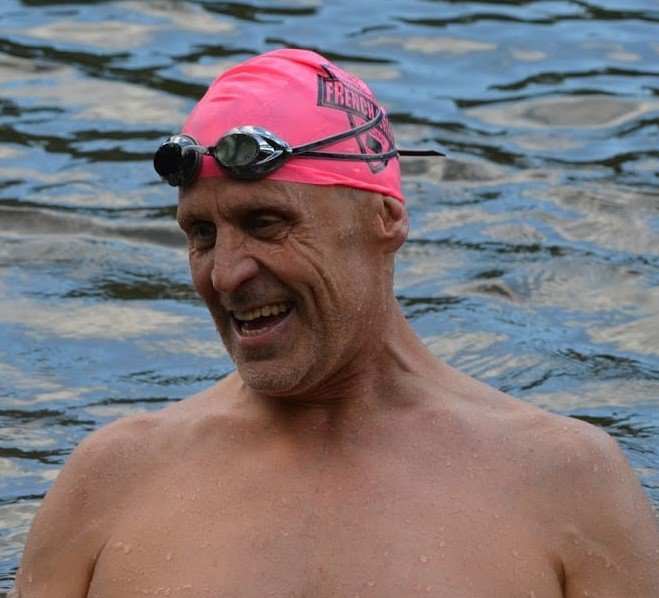 Jeff Rake, 56, first attempted to swim across the Catalina Channel in California in 2021. He said that circumstances, including water conditions, were among the obstacles he faced during that attempt.

As his alcoholism flourished during his 40s, Rake was diagnosed with sarcoidosis, a rare tissue disorder that had a major impact on his lungs. His weight and blood pressure also increased as his addiction took hold.

His experiences with alcoholism and substance use disorder caused depression, Rake said, making it difficult to stay motivated to retain sobriety and improve his health.

Then, four years ago, things started to change. He joined support groups before entering into a treatment facility to get sober. Rake’s lung condition improved, and he began thinking of his next steps as he got his life back on track.

“I went back to that same question but I wasn’t sure it was the (right) time,” Rake said. “In early sobriety, you’re thinking, ‘I’m gonna get a master’s degree and learn to rock climb’ and all of these things, but then you calm down. But I did know that I wanted to focus on doing these bigger swims. With a new outlook on life, I dedicated myself to pursuing how far I could take them.”

In the time since, Rake has accomplished a lot in the water. He swam a 7.5-mile race in 2019, one year after starting his recovery. In 2020, he completed a 12-mile swim at Coronado Island in California, where he set his sights on the Catalina Channel. Still, his biggest goal is to swim the Cook Strait in New Zealand, a feat that only 130 people have accomplished since 1962.

When Rake first attempted to cross the Catalina Channel in 2021, a number of obstacles got in his way. For one, there were hazardous conditions in the water during his scheduled time. Additionally, the professional kayaker who was to accompany him on his swim canceled at the last minute, leaving Rake’s swim up to chance.

He was able to swim the following day, with his nephew acting as his kayaker.

Though he felt he was properly trained, Rake said he didn’t account for the cold water. He had completed an 8-hour training swim ahead of his first attempt, but he was swimming in 72-degree water. Earlier this month, Rake did a 6-hour training swim at the Jersey Shore in 60-degree water, an experience much closer to what he’ll encounter when swimming the Catalina Channel.

“The cold is also very mental,” Rake said. “Pushing that (temperature) barrier is something swimmers need to address in training. It goes hand-in-hand with enduring the cold water. Training in cold water can help them endure and overcome other mental challenges.”

Rake noted that he may have overtrained for his first attempt by swimming more than 1 million yards in preparation. This time, the swimmer is training with a bit more discipline, using a periodization technique.

To improve his overall performance, Rake focuses on a different aspect of training each week. That ranges from simply playing in the water to long, continuous swims in open water. 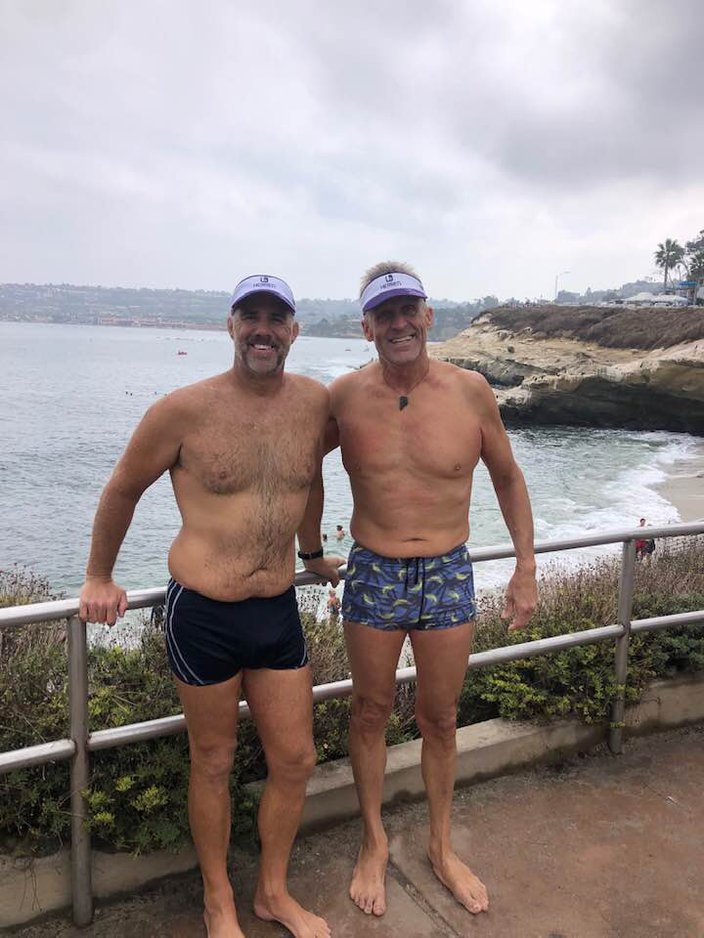 During Jeff Rake’s first attempt at swimming across the Catalina Channel in California, a professional kayaker tasked with accompanying him bailed out just before he was set to swim. At the last minute, Rake’s nephew, left, stepped in to help, though he’d never done it before.

Since starting his journey to recovery, Rake has founded his own organization — iSwim4 — as a way to facilitate his own swims and to help people in early recovery through aquatic fitness.

“People in early recovery are more unsteady, and you typically hear stories of people entering treatment centers multiple times before they ‘get it,'” Rake said. “There are a lot of treatment programs — particularly 12 Step programs — but having a supplemental program focused on something like fitness can help people sustain the quality of their recovery and the length of their recovery.”

Though Rake accepts donations to iSwim4, he also raises money for another recovery-based organization — The Herren Project.

A lot of the money Rake raises through his own organization is then donated to the Herren Project. As a father, Rake was unsure how his family could afford his recovery treatment along with other major expenditures, like housing and tuition. For those who experience financial barriers to treatment, scholarships go a long way.

“There’s a certain part of it that’s just simply shedding light on what’s possible when you’re in recovery and what you can achieve when you’re sober,” Rake said. “More importantly, think about what you can achieve; think about your potential or someone else’s potential. There’s more of stigma that applies to people with alcohol and substance abuse disorder. But the ripple effect is that when these people discover recovery, not only do they go onto do these big endeavors, but they impact those around them.”

Rake is inviting people to follow his swimming pursuits on his website, where he provides regular updates on his training and progress.

Want To Get An Edge On Appeals? This Data Can Help