Plans for the new museum dedicated to the works of influential, modernist sculptor Alexander Calder moved forward Wednesday, as the designs for the building were submitted to the Philadelphia Art Commission for approval.

Calder Gardens, as the institution will be known, will be located on Benjamin Franklin Parkway between 21st and 22nd streets, across from the Barnes Foundation and the Rodin Museum. The project is expected to cost $70 million. Most of the funding has already been raised through private donors, including the Neubauer Family Foundation and Pew Charitable Trusts, and $10 million in grants have been awarded by the state.

Calder is best known for inventing the mobile, a category of kinetic sculptures, and the stabile, a similar style of sculpture but that is rigid. The artist’s massive abstract works are installed in public spaces all over the world. His sculpture “Ghost” is displayed in the Philadelphia Museum of Art and another, titled “White Cascade” is at the Federal Reserve Bank of Philadelphia near Independence Mall.

Once it opens, Calder Gardens will operated by the Barnes Foundation.

The goal is to “create the ideal environment for the public to encounter my grandfather’s work but also to elevate personal contemplation and reflection,” said Alexander S. C. Rower,  president of the Calder Foundation.

“Calder’s role as a pioneer of experiential art is essential to his legacy,” he said. “For viewers who open themselves up to the possibilities of his mobiles and stabiles, the unexpected takes root. His objects continuously unfold in real time.” 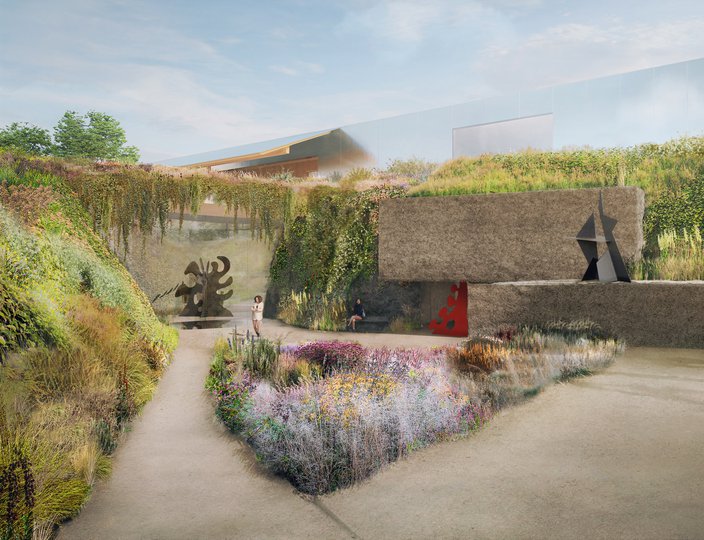 A rendering of Calder Gardens, a new museum dedicated to the work of influential modernist sculptor Alexander Calder. The project is expected to be complete in 2024.

Pending approval by the art commission, construction on the museum is expected to begin before the end of the year and could be complete by late 2024.

A two-story, 17,965-square foot structure clad in a softly reflective metal will be at the center of the site, according to a press release from the Calder Foundation. The structure is designed by the Swiss architecture firm Herzog & de Meuron. The remainder of the 69,319-square-foot lot will be transformed into a naturalistic garden designed by Dutch landscape architect Piet Oudolf.

A rotating collection of works Calder and his relatives will be displayed both indoors and outdoors.

The city own the land for the museum and it is being leased to the foundation for 99-years, at no cost.

The idea for a Calder museum in Philadelphia has been discussed for more than two decades, and plans for a Calder museum on the Ben Franklin Parkway were first announced in February 2020. Construction had been scheduled to start in 2021 but that timeline was disrupted by the pandemic.

The project is part of a broader, city-led plan to redesign the parkway by adding more attractions and making it more pedestrian friendly.

Calder only spent a brief part of his childhood in Philadelphia. Although his parents were artists, Calder didn’t initially plan to follow their path. He studied engineering at the Stevens Institute of Technology in New Jersey, and the skills he learned influenced his style. 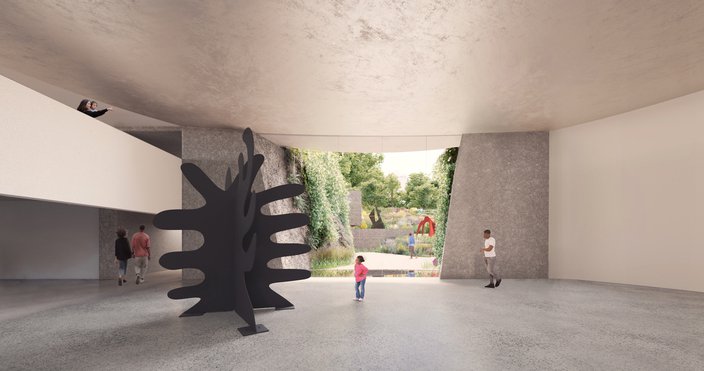 A rendering of Calder Gardens, a new museum dedicated to the work of influential modernist sculptor Alexander Calder. The project is expected to be complete in 2024.

Works by Calder’s family members will also be displayed at the new museum, including his mother, Nanette Lederer Calder, who was an accomplished painter and trailblazing feminist.

Calder’s forebearers had a more traditional approach to their art, and their works centered on crafting detailed, lifelike human figures.

William Penn statue sculptor Alexander Milne Calder, was born in 1846 in Scotland and he came to Philadelphia to attend the Pennsylvania Academy of Fine Arts. He completed the landmark statue on Philadelphia City Hall in 1894. It is 36 feet tall and weighs more than 53,000 pounds.

Alexander Stirling Calder, born in Philadelphia in 1870, followed in his father’s footsteps. His Swann Memorial Fountain on Logan Circle was completed in 1924.

The Ultimate Guide To Going Paperless