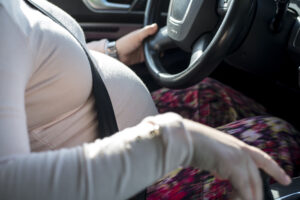 If you’re pregnant in Texas, can you legally drive in the HOV lane? That’s what one pregnant woman is arguing after she was ticketed for doing so following the fall of Roe.

Meet Brandy Bottone, a pregnant woman who is fighting a traffic ticket she received last month. Bottone was stopped at a highway checkpoint in the carpool lane, and her police encounter is stirring up a new legal debate in the state. NBC DFW has the details:

At the time of the incident last month, she was 34 weeks pregnant.

But the officer told her that doesn’t count.

“And then I said, ‘Well (I’m) not trying to throw a political mix here, but with everything going on (with Roe v. Wade), this counts as a baby,’” she said.

Although an unborn child is recognized as a person by the state’s penal code, the Texas transportation code hasn’t been updated and doesn’t give fetuses the same status. Bottone received a $275 ticket that she’s planning to contest. “I really don’t think it’s right because one law is saying it one way but another law is saying it another way,” she said.

We hope a judge agrees with her, and we’re more than sure Bottone will find a wealth of support if she’s looking for a lawyer to represent her. Her court date is July 20, which is right around the same time as her due date. Best of luck!

Why Peter Brandt Thinks Cardano Is The Definition Of “Ugly”