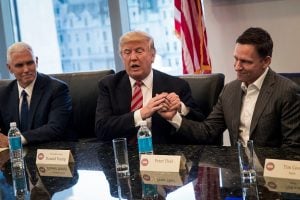 Last night, the government tried once again to convince the Eleventh Circuit to return the Trump warrant case from the land of Calvinball to IRL law.

“The district court’s injunction is preventing the government from using its own records with classification markings—including markings reserved for records of the highest sensitivity—in an ongoing criminal investigation into whether those very records were mishandled or compromised,” prosecutors begin, as if having to articulate the import of US District Judge Aileen Cannon’s order out loud to actually convince themselves that this shit is really happening.

And who could fault them for their incredulity? In a country where cops can show up with a warrant and take more or less anything they want, a federal judge is seriously entertaining the argument that a private citizen could assert possessory interest in top secret classified documents. In the interests of “fairness,” she’s now and forcing the government to tip its hand in a criminal investigation and make highly classified documents available to the potential defendant and his lawyers.

We are in Crazytown!

“Plaintiff’s response confirms that a partial stay is warranted because he cannot articulate any plausible claim for such relief as to the records with classification markings,” the government argues. “Indeed, Plaintiff scarcely even attempts to explain how such records could be subject to a valid claim of executive privilege, attorney-client privilege, or return of property under Rule 41(g).”

“Plaintiff again implies that he could have declassified the records before leaving office. As before, however, Plaintiff conspicuously fails to represent, much less show, that he actually took that step,” they write. And Plaintiff is now resisting the special master’s proposal that he identify any records he claims to have declassified and substantiate those claims with evidence.

This distinction was not lost on the special master, Judge Raymond Dearie in yesterday’s preliminary hearing.

“If the Government essentially gives me prima facie evidence that these are classified documents and you, for whatever reason, decide not to advance any claims claim of declassification which I understand is your prerogative, I’m left with a prima facie case of classified documents. And as far as I’m concerned, that’s the end it,” he asked, later characterizing the former president as trying to “have your cake and eat it” by insisting that he has a right to examine top secret documents which may be evidence of his own criminality first and only then decide if he wants to advance his theory of telepathic secret declassification.

Ditto for the preposterous claim that he could have secretly characterized government records as “personal,” in contravention of the clear language of the Presidential Records Act (PRA):

Second, Plaintiff implies (at 14-15) that the PRA gave him “sole discretion to classify a record as personal” before leaving office. But Plaintiff does not represent that he categorized any of the records bearing classification markings as personal. Any attempt to do so would have been flatly contrary to the statute, which limits personal records to those “of a purely private or nonpublic character.”

The Justice Department goes on to largely repeat arguments from its original appeal, pointing out that the plaintiff has failed to answer them in any meaningful fashion. Trump has consistently misconstrued his right to access his presidential records as a possessory interest; demanded heightened process as a perk of his former office; failed to articulate any irreparable harm to him from the government using the classified documents, going so far as to insist that it serves the public interest to throw a wrench in the government’s investigation; asserted without evidence that the government will not be harmed by being forced to disclose top secret material; and totally mischaracterized whatever residual executive privilege interest he might assert years after leaving the White House.

Plaintiff cannot assert the privilege “against the very Executive Branch in whose name the privilege is invoked,” Nixon v. Administrator of General Servs., 433 U.S. 425, 447-48 (1977); the privilege would in any event be overcome by the government’s “demonstrated, specific need” for the evidence, United States v. Nixon, 418 U.S. 683, 713 (1974); and Plaintiff should not be heard to assert a privilege that he failed to raise in response to a grand-jury subpoena.

Meanwhile, Republican Attorneys General from 17 states have attempted to ride to the rescue with an absolutely batshit amicus brief, which demands that the court work from a premise that the Biden administration is hopelessly corrupt and “at a minimum, this Court should view the Administration’s assertions of good-faith, neutrality, and objectivity through jaundiced eyes.”

The entire document is an extended aria of generalized grievances unrelated to the instant dispute in support of an argument that the court should accord Trump special process as a former president, but “set aside the presumption of regularity usually afforded to government officials.” Because conservatives love cops … except for when they don’t.

Fingers crossed for a panel that’s not floridly insane.