Philadelphia police have identified a teen suspected to be one of six people involved in last week’s shootings outside Roxborough High School, where a 14-year-old boy was killed and four other teens were injured following a football scrimmage with two other high school teams.

Dayron Burney-Thorne, 16, is wanted for murder, multiple counts of attempted murder, criminal conspiracy, gun charges and related offenses, police said Tuesday. A warrant has been issued for his arrest, and he is considered armed and dangerous, police said.

Police didn’t provide specific details about Burney-Thorne’s connection to the Sept. 27 shooting on the 4700 block of Pechin Street, which runs between the back of Roxborough High School and the school’s football field. Investigators are looking for five shooters and a sixth person who was the getaway driver. Burney-Thorne is described as 6 feet 3 inches tall and weighs 215 pounds.

Authorities also have released surveillance video of three other suspects in last week’s shooting, but did not identify these individuals.

“We give our word to the survivors and the families that we will not rest until the cowards responsible for this are taken into custody,” Philadelphia Police Commissioner Danielle Outlaw said at a Tuesday afternoon briefing. 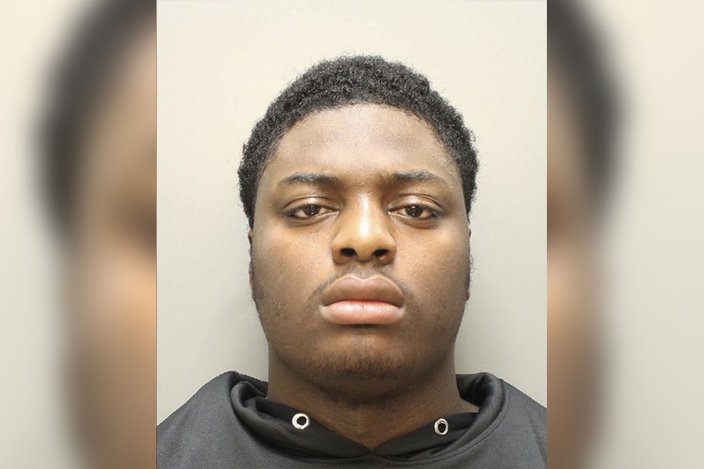 Dayron Burney-Thorne, 16, is wanted by Philadelphia police in connection with the fatal shooting outside Roxborough High School on Tuesday, Sept. 27

Though police have not identified any of the other suspects in the shooting, Outlaw suggested Tuesday that police are making progress in the investigation.

“We know who you are, we will find you, and we will take you into custody,” Outlaw said, urging the suspects to turn themselves in to police.

Philadelphia Police Capt. Jason Smith said the homicide unit is looking into eight persons of interest, including Burney-Thorne, as authorities look to identify the six involved in the shooting and escape.

The shooting happened around 4:40 p.m. as players from Roxborough High School’s junior varsity football team were walking from the field back to the high school. They had just wrapped up a scrimmage with the teams from Northeast High School and Boys Latin High School.

As the players walked along Pechin Street near Fairway Terrace, headed to their locker room, five gunmen emerged from a parked SUV and fired more than 60 shots.

The SUV had been parked on Pechin Street for six minutes prior to the shooting, police said, leading investigators to believe the shooting was a targeted ambush. The vehicle, a stolen Ford Explorer, was recovered last week at a parking lot in Southwest Philadelphia and taken to a police impound lot.

On Monday night, police recovered a second vehicle, a grey Chevrolet Impala, which Smith said appears to have been used as a chauffeur car to take the shooters back and forth to the Ford Explorer. The Impala was found at 25th and Willard streets.

“This was definitely a well-orchestrated shooting. It really was,” Smith said. “These individuals were being very careful to not leave their identifiers.”

Nicholas Elizalde, a student at nearby Walter B. Saul High School, the school district’s agricultural high school, was fatally shot in the chest during the ambush. Elizalde had just begun high school in the city and his family was planning to move from Havertown to Roxborough in December. He joined the Roxborough High football team because Saul doesn’t have a team of its own.

Police have described Elizalde as an innocent victim who appears to have been caught up in the hail of gunfire.

Three of the other boys who were shot also are members of Roxborough’s junior varsity football team. The fourth shooting victim was a 17-year-old who does not attend Roxborough High School and is not a football player, police said. His connection to the shooters remains unclear, but investigators believe the 17-year-old may have been the target.

After the initial gunfire, four of the five shooters got back into the SUV, which fled the scene. The remaining gunman chased the 17-year-old and continued firing until he ran out of bullets and then fled on foot, police said.

Last week, police released surveillance footage from the shooting. The reward for information leading to arrests and convictions is up to $45,000. Police also are investigating whether those behind the shooting at Roxborough High School may be connected to other shooting incidents in the city.

Anyone with information about Burney-Thorne can contact Philadelphia police by calling or texting (215) 686-8477. Tips also can be submitted anonymously tip online.

What’s Trending in Safety and PPE