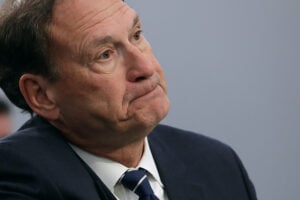 In the race between freeing an innocent person from jail and putting a little more work on the plate of the federal judiciary, it sure looks like Supreme Court Justice Samuel Alito is willing to throw away the key. This harsh stance came up during oral arguments yesterday in Jones v. Hendrix.

As reported in Law & Crime, the conduct that plaintiff Marcus DeAngelo Jones was convicted on is no longer sufficient for him to be legally guilty of the crime:

The case, Jones v. Hendrix, involves a federal habeas corpus petition filed by federal prisoner Marcus DeAngelo Jones. Jones was convicted in 2000 of possessing a firearm as a felon in violation of 18 U.S.C. § 922(g)(1). Following his conviction, Jones appealed and lost several times. However, in 2019, SCOTUS ruled in Rehaif v. United States that the meaning of 18 U.S.C. § 922(g)(1) is different than it had been interpreted during Jones’ trial.

As a result of the Rehaif ruling, the conduct that led to Jones’ conviction (specifically, that he knew he had a firearm, but was unaware that the gun possession had been illegal at the time) was no longer enough for him to be legally guilty of the crime. Jones challenged his conviction again on the basis that despite no new facts being raised, he did not violate the underlying statute as its meaning has been revised.

The procedural posture of the case is also unique and points to the systemic injustice of the system:

Jones lost his bid to overturn his conviction because federal law limits the number of times a prisoner can ask for review of a conviction. Because Jones had already filed a habeas petition years before the Court ruled in Rehaif, he lost his case both before the district court and the United States Court of Appeals for the Eighth Circuit.

In a practical sense, Jones’ case seems maddeningly illogical. The 8th Circuit ruled against Jones on the basis that he should have raised his claim in his first habeas petition — but if he had raised the claim at that time, he’d have surely lost, because the Rehaif ruling had not yet happened.

Despite the very clear fact Jones should not be in jail for the actions he took, Alito’s question indicated he was a lot more concerned about potential court clog than an innocent man sitting in prison:

Are you concerned that every federal prisoner who wants to bring a successive motion is going to claim that this falls within the traditional scope of habeas, and this would be an escape clause that would be invoked again and again and again, and all the district judges are going to have to analyze the traditional scope of habeas to see whether the claim actually falls within that?

Of course the fears of an overwhelmed judiciary are well overblown. The chance of another person in the same position as Jones is pretty small. But EVEN IF IT WASN’T — shouldn’t the justice system be deeply concerned an innocent man is in jail?

Philly-native Jules Bass lives on through Christmas classics, like 'Rudolph,' and their pioneering animation style

Fantom Price Rises 20% In One Week Due To This Rumor