The Question Of Our Times: Is Johnny Depp Still Dating His Attorney? 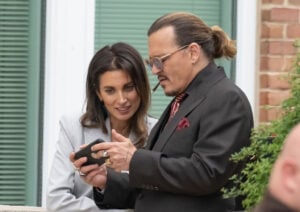 As lawyers, there are questions that keep us up at night. Would we have judicial review if SCOTUS just demanded that that damned letter be delivered? How learned is Learned Hand really if he knew that his fundamental formula for determining damages would be handed down to a group of people who are infamously bad at math? This last one is the real kicker — is Johnny Depp still dating that lawyer lady, Schillings partner Joelle Rich, who represented him during his defamation case in the UK against The Sun?

While the answer remains unclear, there is reason to believe that the waters are troubled.

[T]here was no sign of the actor when Rich attended a family wedding in Ibiza last weekend and sources in New York believe that the relationship is fizzling out — and may actually already be over. A friend of Depp’s said: ‘Are they still an item? We are not talking about a normal couple here. It’s not a big, stable, committed love affair and I’m not sure that it ever was.’ The source added: ‘I don’t know if they are together in any way at this point. Certainly I don’t believe it is a serious romantic relationship, or even an exclusive one.’

I wonder which of these Sauvages broke it up? Did Johnny Boy pull a whiplash and let her off before her love could ruin his next star role in a film about space pirate zombies? Or did she call it quits because John John took too many privileges based on their attorney-client relationship. I ultimately don’t know. This is entirely speculative — Johnny could have just been elsewhere recording another fragrance commercial.

I do now that covering this is a nice break from focusing on which right SCOTUS will undo next — almost as nice as the break you’re taking from hitting your billables. Let’s both get back to work, shall we?

BNB Coin Surges By Over 20% During Market Pullback

This Historic Bitcoin On-Chain Support Level Is Still Not Lost