The Spotlight’s About To Get Real Bright On Ginni Thomas 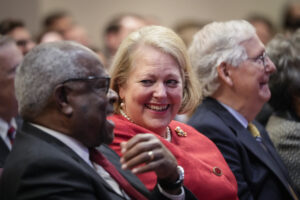 I never had particularly high hopes for the January 6th committee. Sure, I like most people who care about the rule of law, were horrified by the coup attempt, but you know, I don’t expect most MAGA-types to be persuaded by actual facts.

But the slick initial presentation got my attention. The drinking games kept it. And now that Ginni Thomas is in the committee’s sights, I’m hooked.

Even before yesterday’s revelation we knew a lot about the wife of Supreme Court justice Clarence Thomas’s involvement in the 2020 election blowback. Ginni has long been a political operative in her own right, and no stranger to controversy. But things really ramped up after Donald Trump lost the election. There were the… questionable text messages with Mark Meadows, Trump’s Chief of Staff. And her campaign targeting state republicans asking them to just pick their own slate of electors sympathetic to Trump, regardless of the actual election results.

But it was her correspondence with John Eastman — affectionately known around these parts as the Coups 4 Dummies lawyer given his penchant for wacky (and dangerous) plans to seize power post-election — that finally made the committee wanna have a little chat with Mrs. Thomas.

BREAKING: Ginni Thomas officially served with letter requesting her to meet with January 6 committee regarding her communications with John Eastman.

But now a lot of people are wondering exactly what the committee will ask Ginni.

Gabe Roth from Fix the Court would really like to know what Clarence knows. And SAME. Especially given his predilection to, you know, not recuse himself on  matters his wife is involved in.

Also of interest, is the supposed insight into the Supreme Court that was being peddled in right wing circles around then. Where was that coming from? GREAT QUESTION to ask of the spouse of someone on the Court that has her fingerprints all over the post-election fiasco.

6. A Trump-affiliated lawyer, Kenneth Chesebro, wrote to John Eastman: “I don’t have the personal insight that John has into the four justices likely to be most upset about what is happening in the various states, who might want to intervene, so I should make it clear that I don’t discount John’s estimate.” Did you offer Eastman that “personal insight” by speaking with other justices and their spouses or through any other means?
7. Who is or was paying you or Liberty Consulting to lobby Mark Meadows, Arizona lawmakers and others to overturn the results of the 2020 election?
8. Besides Liberty Consulting, from what other sources did you earn income in 2020 and 2021?
9. Do you believe it is ethical for a Supreme Court justice to participate in a case or petition when the justice’s spouse clearly has an “interest” (cf., 28 USC §455(b)(4) and (5)) in its outcome?
10. Can you elaborate on what you meant when you wrote to Mark Meadows, “We are living through what feels like the end of America”?

But there are even more avenues to explore. Especially since, in the wake of revelations of the communications between Eastman and Ginni, Eastman took to his substack — seriously, a substack — to spout off on the recent reports. And well, Eastman’s explanation only gives us MORE questions.

As to the Frontliners call:
– Did Eastman do the call?
– Was Ginni on it?
– Who were the “grassroots state leaders”?
– If he did the call, what did he discuss?
– If Ginni was “on sabbatical” b/c of “election stuff,” why was she still organizing getting Eastman to speak?

Of course, there’s one question LOTS of folks would love to ask Ginni Thomas under oath…

I didn’t catch who said it, but someone on MSNBC just made the million dollar connection: John Eastman told people he had inside dirt on the justices’ thinking. The Dobbs draft got leaked. There’s a leaker at the Supreme Court & one person at the center of speculation in both.

Despite being wildly outside of the purview of the January 6th committee, Ginni’s connection with the other Court scandal — the dismantling of abortion rights and the leaked draft Dobbs opinion — is absolutely something many people would love to hear about.

The good news, for those of us VERY curious about Ginni’s role in this entire coup mess, is that — at least for now — she’s posturing as if she’ll comply. Telling the Daily Caller, “I can’t wait to clear up misconceptions. I look forward to talking to them.”

Ethereum (ETH) Hammered Down To $950 As Crypto Selloff Deepens