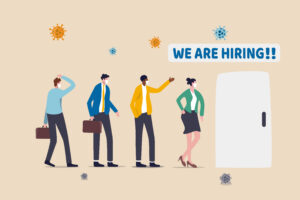 As I’m fond of pointing out, anyone born between 1981 and 1996 is a millennial. That puts the oldest millennials in their early 40s. Ivanka Trump is a millennial. So is Mark Zuckerberg. The youngest members of this cohort are turning 26 this year. Millennials are hardly the picture of youth anymore.

So, the aging need a new generation to complain about, and fortunately, “Generation Z” is already well-poised to fill the big shoes of we millennials in this regard.

The Pew Research Center defines Gen Zers as anyone born after 1996. Also called “Zoomers” in a bit of boomer-related wordplay, there was a lot of handwringing at the start of the pandemic about what kind of job market this new generation would come of age into.

These worries were somewhat misplaced. No one is going to argue that the pandemic was exactly pleasant: everyone’s mental health is a shattered ruin at this point, some people did indeed lose their livelihoods, and yeah, over a million people died.

But the job market sure came roaring back exceedingly quickly. June saw another stellar jobs report. The U.S. economy added 2.74 million jobs in the first half of this year, and unemployment held steady at the historically low rate of 3.6% for June. With 11.3 million job openings posted at the start of June, there were almost two jobs available for every unemployed person in the United States.

All of this is kind of great for the typical Zoomer out there. We have a 16-year-old at home, for instance. Last summer, she worked for about a month at a local Dairy Queen franchise, at a rate of pay that put the $5.25 an hour I made at that age to shame. Now she has a position at a national retail chain earning even more, and she didn’t even lose it after bailing on two separate shifts during her first two weeks.

Sticking it out for only a month at one job and having an impressive stint of early absenteeism at the next would not have been seen as a particularly great employment record in many periods of history. Seems pretty typical these days, however, and not at all a hindrance to simply going across the street to work somewhere else and make just as much.

Naturally, there’s a bit of worry about what lessons the youths will take from such an employee-friendly work environment. Along with many other aging people, my natural instinct is toward concern that in this job market young people will fail to learn the importance of hard work.

More likely, though, I suppose they’ll just learn that they shouldn’t take so much of their boss’s crap like we all did when we were younger. As much as employers and television sitcom producers would have you think otherwise, your coworkers are not (and should not be thought of) as your family. You’re probably not going to be with them for all that long anyway in the grand scheme of things.

Until the relatively recent past, employers ruled the job market. When employers have the upper hand against employees for a long, long time, it’s easy to forget that the free market is supposed to work both ways. A job isn’t something you necessarily should have to compete intensely for, or grovel for, or even be thankful for, really. Theoretically, it’s just as natural for employers to be competing for employees as it is for workers to be competing amongst themselves for jobs.

All that said, it is fairly easy to get a job right now, and pretty hard to lose one, with behavioral proclivities corresponding accordingly. So, get ready for the “Lazy Zoomer” memes that this job market is sure to spur within a year or two. Or preferably sooner. Millennials have done our time in the barrel.

Jonathan Wolf is a civil litigator and author of Your Debt-Free JD (affiliate link). He has taught legal writing, written for a wide variety of publications, and made it both his business and his pleasure to be financially and scientifically literate. Any views he expresses are probably pure gold, but are nonetheless solely his own and should not be attributed to any organization with which he is affiliated. He wouldn’t want to share the credit anyway. He can be reached at [email protected].

How ETHBTC Could Hint At A Return Of Risk Appetite