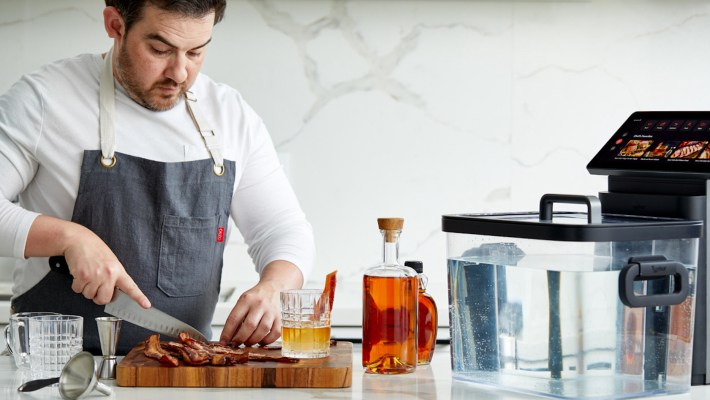 If you’re a budding home chef eager to try your hand at sous vide cooking, Typhur Technology wants to be your new best friend.

The San Jose-based culinary innovation company has been quietly working on its first product, the Sous Vide Station, which is poised to debut at CES 2023 and will be made publicly available around the third quarter of that year, John Van Den Nieuwenhuizen, general manager of Typhur Technology, told TechCrunch.

Sous vide is a French term meaning “under vacuum” and is a method of cooking where food is vacuum-sealed in a bag and then cooked in a water bath to a precise temperature.

Current sous vide cookers on the market don’t come with all of the components together, but Typhur’s Sous Vide Station does, Van Den Nieuwenhuizen said. It includes a 1,750-watt circulator, a 12-liter water tank, a detachable vacuum seal, BPA-free food bags, sous vide weights and a rack system.

There is also a 12-inch digital touchscreen with step-by-step and video-guided recipes from Michelin-star chefs, like Owen Wyatt, who joined the company earlier in 2022 as culinary director and head chef after serving under Michelin star chef Thomas Keller’s Bouchon Bistro in the Napa Valley. Van Den Nieuwenhuizen and Wyatt also previously worked together at Hestan Smart Cooking.

The company declined to provide a price point for its appliance. An internet search yielded similar products that ranged in cost from a couple hundred dollars to several thousands of dollars, so there is not a great way to determine where Typhur’s might land, other than to say when I went on the company’s website, it was offering a $200 discount for reserving now.

Typhur was started by serial entrepreneur Frank Sun in 2021, who Van Den Nieuwenhuizen said during his time in the U.S. was looking around at different markets for underserved opportunities and settled on the kitchen.

“Most of the innovation was taking place on the supply chain level,” he said. “For example, if you buy a toaster today, it’s probably going to be worse than one from the 1950s because they use poor components.”

With Typhur, Sun wanted to make the best product from the beginning so that people could “achieve a restaurant-quality meal at home,” and do it in a way that is similar to Dyson’s approach to floor care and hair care — start with the basics and build a product around it, Van Den Nieuwenhuizen said.

Accelerating the appliance to market is $20 million in seed funding led by Jiupai Capital and Bright Future Technology Holdings Ltd. It will also enable the company to begin developing other kitchen products.

“The funding is to get us off the ground, which we are and we have,” Van Den Nieuwenhuizen said. “We’re building out the team here in the U.S. I was about the first employee back in October, and we built up to about 10 employees from there, and are looking to add about another 10 to 15 employees over the next six months.”