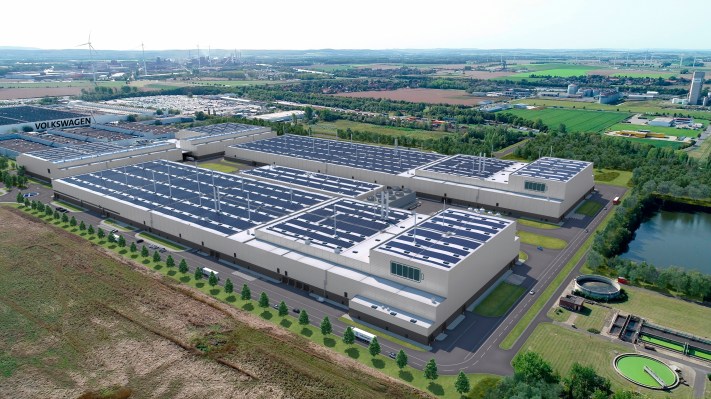 Volkswagen Group broke ground Thursday at the first of six battery factories it expects to build in Europe, the official kick off of a new battery business that will invest $20 billion through 2030 to become a global EV leader.

Volkswagen’s new company, called PowerCo, will be responsible for the automaker’s global battery business, managing the value chain from raw materials to recycling. The automaker expects that the factory in Salzgitter, Germany, and the five others planned for Europe will cut its battery costs by half, a key competitive advantage as the global market for EVs intensifies.

The factories and new company is part of Volkswagen’s efforts to ramp up EV production worldwide. Earlier this week. the world’s second-largest automaker announced plans to grow its business in China with “some major investments” and a hiring spree at the Chinese office for CARIAD, Volkswagen’s in-house automotive software arm.

Volkswagen said battery cell production will begin in 2025 at the Salzgitter factory, which will serve as the standardized model for future factories, making it easier to replicate and scale. PowerCo will locate its second cell factory in Valencia, Spain, and is considering expanding the model to North America. Locations for the four other European factories have not been announced.

PowerCo will manage international factory operations, develop cell technology, vertically integrate the value chain and supply the factories with machinery and equipment. The Salzgitter plant is expected to supply about 500,000 EVs. Together, the new factories planned for Europe could supply roughly 3 million EVs.

Volkswagen said PowerCo and partners will invest more than 20 billion EUR ($20.34 billion) by 2030 and employ up to 20,000 people in Europe. Additional projects include developing storage systems for the energy grid.

VW CEO Herbert Diess called the launch of the company a “strategic milestone.”

“Establishing our own cell factory is a mega-project in technical and economic terms,” Diess said in a statement. “It shows that we are bringing the leading-edge technology of the future to Germany.”

Are A Fake Job Offer And A .Pdf Responsible For The Axie Infinity/ Ronin Hack?