In past seasons, Philadelphia Eagles fans generally rooted for their own team, and kept an eye on the rest of the NFC East. Now that they might be Super Bowl contenders — especially in a bad NFC — it’s probably worth paying attention to rest of the conference as well. There are also peripheral rooting interests for Birds fans this season, as they own an extra first-round draft pick in 2023.

And so, each week we’ll lay out a rooting guide for non-Eagles games on the NFL schedule, and yes, I’m aware that most of the below is obvious. Ideal winners bolded.

• Ravens at Giants (1:00 p.m.): Last week, we said that it would be a good thing if the Giants beat the Packers, on the premise that the Giants will eventually start losing games because they don’t have a good roster, and the Packers are a bigger threat to the Eagles’ chances of landing the highest playoff seed possible. Now that the Giants are 4-1, it’s time to start rooting for them to lose games. 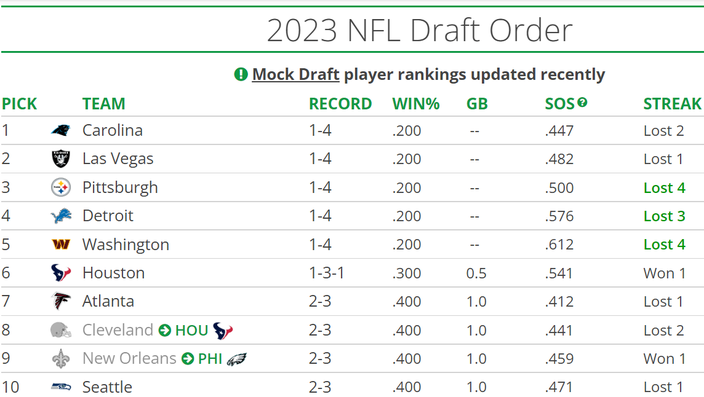 The Bengals are 1.5-point favorites in this matchup.

A look at fivethirtyeight.com’s updated 2022 predictions, sorted by teams’ percentage chance of earning a first-round bye:

As you can see, the Eagles are the overwhelming favorites to earn the No. 1 seed in the NFC at the moment, at 49 (!) percent. The Cowboys are behind them at 18 percent, followed by the Buccaneers and Vikings, each at 9 percent, the 49ers at 7 percent, and the Packers at 4 percent.

So, you know, it’s best if all of those teams lose:

Other NFC vs. NFC games

None of these teams below look like Super Bowl contenders so far this year, but certainly the Rams are more threatening than the Panthers, and I guess (?) the Cardinals are more of a threat than the Seahawks.

Teams that the Eagles play later this year in italics:

Irrelevant to the Eagles

Teams on their bye week: Lions, Titans, Raiders, and Texans.

Heads Up, Mediation Professors! That Oculus Headset Could Be A Tax Write-Off

What is xylazine, the animal tranquilizer that dominates Philly’s fentanyl supply?