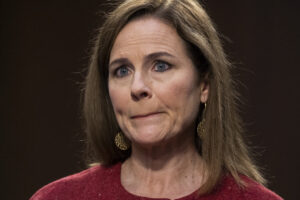 That is telling. She probably didn’t want the attention.

If I were a conservative, I would not want the only people on the court to be speaking for me to be Clarence Thomas and Sam Alito. I would want Amy Coney Barrett to write more. I think she does a better job of presenting what conservatives want, and she is not as interested in inflaming people as Thomas and Alito are.

— Professor Mary Ziegler of UC Davis Law, an expert on reproductive rights and U.S. conservatism, commenting in an interview with the ABA Journal, on the fact that Justice Amy Coney Barrett merely joined Justice Samuel Alito’s contentious majority opinion in Dobbs v. Jackson Women’s Health Organization, without writing a concurrence to explain her own views as the lone woman on the Supreme Court who was willing to overturn the constitutional reproductive rights that had been afforded to pregnant people under Roe v. Wade for nearly 50 years.

TA- Trezor (TRB) Holds Strong Above $40, Will The Crypto Pullback Affect It?